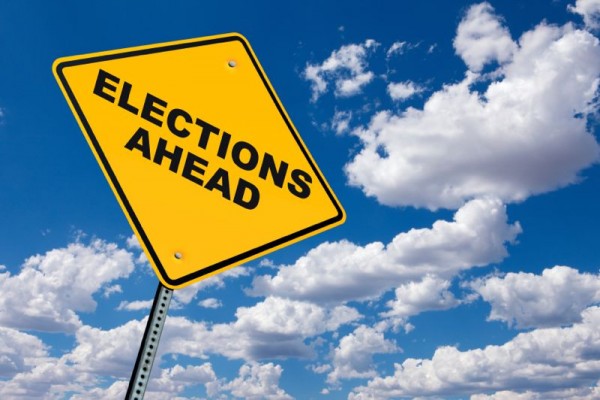 The U.S. 2016 presidential election might still be a year away, but it has basically been happening since the day after the 2012 race. For some, running for office has become a viable career choice, not merely a means to an end.

This is the biggest failing of our Founding Fathers. Winner-takes-all districts lead to the unintentional creation of a two-party system, with no real joy for third-party candidates.

Just look at the four front-runners for president: Hillary Clinton, Bernie Sanders, Donald Trump, and Ben Carson. Each candidate could easily lead his or her own party: Moderate Democrats, Socialist Democrats, Asshole Businessman Republicans, and Batshit Crazy Christian Creationist Republicans, respectively. (So the parties might prefer different names, but you get the idea). Instead, you have Clinton taking up positions she’s never held to try to out-liberal Sanders, and you have Trump, who may or may not have ever even opened a Bible, trying to out-Christian Carson (who, incidentally believes the Earth to be 5,000 years old and Noah’s flood to be an historical event). Inevitably, you’ll have very large blocks of supporters upset that their candidate never got the nomination, forcing them to either hold their noses and vote for “the lesser of two evils” or not vote at all.

Even these 4 theoretical parties fail to account for the entire electorate. What about voters who would vote primarily on environmental matters, or based solely on libertarian principles?

This is no small problem when discussing the efficacy of holding elections in a representative democracy. Simply, if people cannot vote for a party or candidate that holds their views, those views cannot possibly be represented and acted on. A voter with economically conservative views, but socially liberal ones finds themselves stuck voting for a candidate who will work against half (or more) of their views.

As I’ve mentioned previously, nearly half the American population does not identify as either a Democrat or Republican. While some of these independents might vote in an election, a great deal do not. If both parties only represent a small fraction of a voter’s beliefs, what is their incentive to support a candidate from either party?

In a proportional representation system, it is unlikely that any single party would achieve a simple majority in a given election, thus necessitating coalition-building and compromise in order to govern. In short, it would help facilitate that more voices and ideas are represented, and I’m of the opinion that more ideas are better than fewer ones.

This is probably the least-popular of my views, but I think it’s necessary. Right now, lobbyists, special interests, corporations, and billionaires can fund any party or politician without any real limitations. When a few powerful individuals can buy influence in the seat of government, it directly undermines democracy.

Cornerstones of democracy include the ideas of one man, one vote, and equal rights. When one person is capable of buying greater influence over the population (though ad revenue, and special access to the political process), democracy inherently suffers.

At the very least, limits to campaign contributions should be reintroduced, but I think we should go one step beyond, and just make elections fully public. In the upcoming election, perhaps as much as $10 billion will be spent, over half of which will come from special interests and political action committees. I think most Americans agree that the money could be better spent, and the best way to do that is to force political parties to live within a pre-determined amount. Money, obviously, has a corrupting influence on politicians, and we would do well to remove its influence as best as we can.

Elections are for the public good. It logically follows that they should be publicly funded.

First, let’s look at the question of why the “First Tuesday after the first Monday in November” was chosen as the day to hold elections. The elections were good for land-owning farmers after the fall harvest, and before the long winter set in. Tuesday was also convenient because it allowed for a day of travel between Sunday (the Sabbath for Christians) and Wednesday (when farmer’s markets were traditionally held).

This is no longer the case for the vast majority of American voters. U.S. is no longer an agrarian nation, but an increasingly urban one. For most, Tuesday is a work day, and the season does not matter. Moreover, most Americans must work on Tuesdays. We can increase voter turnout and make elections more convenient for most Americans by either moving voting to the weekend, or just making Election Day a paid national holiday. Is there a better way to celebrate democracy than with a public holiday? I think not.

As I’ve already mentioned, certain politicians are in a constant state of campaigning. The moment they win an election, they’re back on the fundraising trail, schmoozing with donors and not concentrating at the job of governing. It’s no small problem, as fundraising can take up the better part of a politician’s day, every day.

In many countries, elections are a matter of weeks, not years. Obviously the U.S. is a huge country, so the presidential election should perhaps be a few months, but I can’t see why it should need to be longer. For Senate and Congressional elections, the campaign cycles could be much shorter. A shorter election cycle would reduce the need for spending, and thus fundraising, which in turn would reduce the influence of special interests. It would also be far less annoying for the average American.

A great deal of this might seem heretical. It flies directly in the face of representative democracy set forth by the Founders. However, the Founders referred to the United States as “A Great Experiment,” and they meant this in scientific terms. In a scientific experiment, you don’t answer the question before the results confirm your hypothesis.

The ideas of directly electing senators, women voting, and non-land owners voting would have also been unthinkable at the time of the founding of the country, but they are ideas that we now take for granted. The Founders could not have foreseen the various political and social movements that led to these constitutional amendments, just as they could not (or did not) foresee the problems of gerrymandering, two-party control, or massively powerful and influential corporations that the industrial age would bring about.

If the stated purpose of the Founders was to create a government “By the people, for the people” we must consider our current experiment to be a failure. The parties neglect the views of a plurality of the population, and moneyed interests have undue influence over the laws and regulations set by congress. The elections often fail to represent the people who do vote, instead favoring the party already in control. A democracy cannot be said to be working when congress has a 13% approval rating, but a 96% incumbency rate.

The U.S. is one of the oldest democracies in the world. It has functioned (to varying degrees of success) in its current form for 226 years. Obviously a country that has lasted this long is doing something right, so it is incorrect to call it a complete failure. However, I believe that our democracy can–and with the rapidly changing world, must–be better. Any of these four changes could individually reap enormous benefits to the functioning of government and society.

← Dogs In Space!
Driving a Tesla →