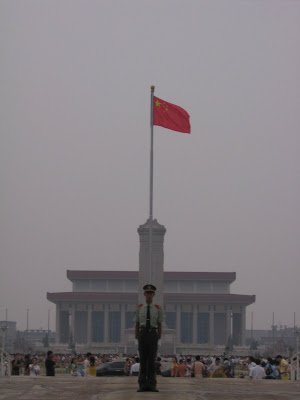 The following is an installment of a recently rediscovered series of columns written for The Daily Beacon, UT’s Student Newspaper, during the summer of 2005.

I have very strict rules for traveling. Well, just one really: Do not pack until the night before departure. This rule has served me very well so far, and I don’ t foresee it changing in the near future. And this includes the biggie: a month in China.

There are two very good reasons for this policy: One, to be a good traveler you must “ go with the flow.” The luggage that you hold will hold you back. The other reason is a cardinal rule of luggage: No matter how many lists you check or how well prepared you think you are, the gods will not allow you to remember everything.

The moment you remember to bring everything you need the gods will lose your luggage in transit out of spite. The best advice I can give you, the reader, is to pack twice the money and half the clothes you think you’ll need. I’ve found that ole’ Ben Franklin can solve most any problem short of incarceration that one may come across. On a side-note, I think jail is a good starting point as to when a good healthy panic is acceptable.

I’d like to give the reader better advice for traveling around this tiny globe, but the best (and only advice) I’ve received so far is from my beloved grandmother. She told me, “Zach, don’t bring back a Chinese girl.”*

While I deeply appreciated her advice, she surely could have dug a tad deeper and come up with some more worthwhile tidbits of knowledge. For example, “ Zach, don’t get the bird flu.” Or, “ Zach, try the Peking Duck.” Really any avian-based advice would have been taken with a great deal of gratitude and would have worked better in that situation, I think. God forbid I meet someone special on the trip.

Oddly enough, this is the exact same advice she gave me before I traveled to China last year.** There must be a deep-seeded fear of Asian women in my family of which I was previously unaware.

I expected some good advice from my grandfather on my dad’s side. After all, he has been to nearly 200 countries*** including China four times and all seven continents. Instead, this is what I got from him, “ Please take me with you… Your grandmother won’t let me eat Chinese food.” Just sad. He then added, “oh, a month of only Chinese food, I’d be in heaven.”

Also, there is zero good advice to be had about jet-lag. None, nada, zero, zip, nothing. To this day I cannot separate the first two or three days of my trip to Beijing in my mind. I look at my journal and think, “Forbidden City on day two? No, no, this has to be wrong.” Some people try sleeping on the flight, others try staying up but in the end it doesn’t matter, your body will throw up its arms in an act of defeat and you’ ll be waking up in strange tour buses wondering how you got there in the first place.

Coming back was even worse, I think I slept for a week straight. Though, in all fairness, coming back into town summed up a three-week drinking binge so my body was definitely in a state of detox.

But I don’ t want the reader to have the wrong idea here, I was there with 20 other UT students and none of us were alcoholics. However, when you put 20 20-something college social drinkers together, the result isn’t pretty.

Let me paint this scenario for you: A couple of friends are going to go out for a night on the town in Beijing or Chengdu or Shanghai. A couple turns into a few and a few turns into a dozen. Then you add dirt cheap (but incredibly smooth) beer plus virtually no responsibilities and you have a recipe for a regrettable amount of drinking. To add insult to injury, there were Australians everywhere, and those people will show you a good time.

Drinking aside, it is a magnificent country. I fell in love with it immediately upon arrival. Despite my severe jet-lag, I still remember stepping off the tour bus at dusk only a few hours after arriving in Beijing and walking through Tiananmen Square. I had seen the sight a million times on TV, usually in a negative context as the world is reminded of the horror that occurred there in 1989, but the sight did not bring memories of oppression.

Instead it brought a sense of awe, of magic, of an incredible and indefinable reality. The red flags were billowing at full mast, the kites were flying high, and I was in China.

I was suddenly a part of this great civilization. The ill-fated student protests and the communist party rallies led by Chairman Mao were never further from my mind than at this moment. Instead I saw China’ s glorious past and its incredible future.

This is why we travel.

I hate to cheese this up too much, but when your perceptions are realigned because of something you’ve traveled many a mile to find, it is magical. I want others to experience what I did if only for a moment.

When we travel, we become connected to the world and usually for the benefit of all involved. I’m not saying that traveling will rid the world of its ills, but you’ll no longer be able to see suffering in a distant corner of the globe without realizing how it affects us all.

The best thing that has ever happened to me is catching the “travel bug,” and I can’t wait to return to the proverbial open road. The world is getting increasingly small, and I hate to break it to those in the self-contained, immortal world of college, but life is getting increasingly short. Often the best reason to “go” is just to say that you have. And you should at least have something to tell the grandkids.

— Zachary Marx is a senior in political science and, like Courtney Cronley, will be sending columns periodically throughout his journey. He can be reached at zmarx@utk.edu.

*Editors note: The same advice was given one year later, prior to King Zach’s trip to Japan, only about Japanese girls.