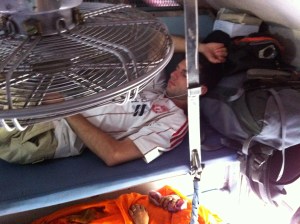 It’s about as comfortable as it looks.

The 16-hour train ride to New Jalpaiguri and the subsequent 3-hour jeep ride to Darjeeling gave us time to chill out from a stressful last day in Varanasi. The noisy, hot, packed train (at one point there were 18 people in our compartment, far over the 8-person maximum) allowed little chance for us to talk. We could basically only communicate with hand gestures, and only when a duly important issue arose. Ironically, a migraine around the eighth hour was one of the best things that happened to me. I then had an excuse to take drugs, which knocked me out cold. At one point, when the ordeal was over, I actually said to Christine, “You know, that train ride wasn’t so bad…” She responded by looking at me like I had lost my mind (if a migraine counts, then I guess I had), and then stating as much.

Our arrival in Darjeeling was a breath of fresh air, literally. The people—largely of Nepalese background—were far friendlier, much less pushy, and less willing to try to rip us off.

After checking in and eating a late breakfast at the amazing restaurant, Sonam’s Kitchen, we headed over to the zoo. It was small, but had an impressive selection of animals. There were more red pandas than I’ve ever seen in one location, and they had a truly impressive Bengal tiger. At one point, we sat down on a bench, sun shining in our faces and looked out into the shrouded hills beyond. A Danish girl and her Danish beer.

After the sun had set, we made our way to a truly remarkable sight in India: a bar! Drinking in public is a big no-no in India, so bars basically don’t exist. Perhaps the Nepalese have a more relaxed attitude toward alcohol or Darjeeling is sufficiently tourist-friendly, but whatever the reason, there we were with cold beers in our hands. Christine noted that two of the four beers available were Danish–not bad for a country that the Indians only knew for their dairy production.

The success of Darjeeling was in no small part due to our new friends at Sonam’s Kitchen. The restaurant, which only consisted of an impossibly small kitchen and three small tables, was run by an incredibly friendly Nepalese family. It didn’t hurt that they also had great breakfast food, with REAL coffee. It might be sacrilegious to drink coffee in one of the tea capitals of the world, but coffee is damn near impossible to find in India.

In addition to feeding our breakfast cravings, they were our makeshift guides, gladly answering our questions, and giving us directions to a wonderful day-hike around town.

The hike was a bit unusual, insofar as we began at the peak, climbed our way down the mountain, and then had to hike our way back to the top. In addition, we weren’t really hiking on a proper path, but one just made up by the gent at Sonam’s. As such, we managed to lose our way no fewer than a dozen times. Thankfully, there were always locals around to give us directions, even if those directions were occasionally contradictory.

Regardless, the sights of the deep valley below, and homes and tea plantations clinging impossibly to the sides of the mountains were incredible. However, we couldn’t help but be disappointed by what we didn’t see: the snow-peaked Himalayas. When we asked our source at Sonam’s where we could see snow-capped peaks, he glibly replied, “Nepal.” While on clear days it is possible to see Everest from Darjeeling, we did not have a single clear day. Oh, it was sunny and beautiful in our mountaintop village all right, but our visibility was practically nil, as heavy cloud cover slipped between the valleys, creating a sensation of being walled-in. As we descended, visibility increased, but only enough to see better detail in the valley.

One of the oddest landmarks that we came across on our mini-trek was a soccer stadium. It seemingly came out of nowhere, and couldn’t look more out of place. The dirt pitch–a common occurrence in Asia–was expansive and impossibly level considering its location on the side of a mountain. Stands were perched excessively high, further up the mountain. I can’t even begin to imagine the shape I would need to be in to play soccer at an altitude above 2000 meters. I hate to say it, because Darjeeling was really an excellent stop, but most things were a tad disappointing. Himalayas? Nope. Hiking? Barely any. Trekking? We didn’t have enough time. Tea? Good, but to my taste buds, it was just tea.

On the last day were were mostly out of ideas, so we tried to hit up the “Toy Train,” the narrow-gauged train that is an UNESCO World Heritage Site, for a joy ride. Like so many other occasions in India, this became an enormous hassle. When we approached the ticket counter, there was a sign that read “Joy rides sold out today.” I tried my luck anyway, and was quickly turned away. Undeterred, Christine gave it a go, and after half-an-hour of being bounced from one counter to another, we were told to talk to the station manager. The station manager, in turn, told us to come back in an hour.

When we returned an hour later, he told us to come back again in another 45 minutes. Three-quarters of an hour later, we somehow managed to get seats on the train that was “sold out.”

The joy ride had some potential, especially if there had been any visibility. Instead, it started raining, and I was feeling the ill-effects of two-weeks of Indian food. That said, it was a generally relaxing couple of hours. 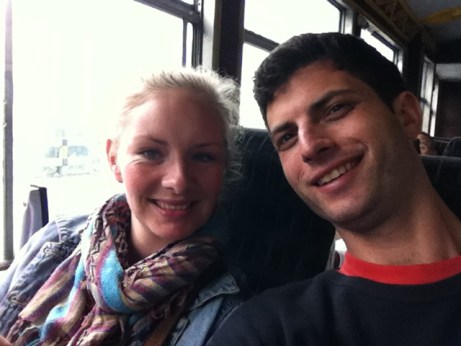 On the Toy Train.

After, we had an early dinner and an early night. We had to leave the hotel at 4:45 in the morning to catch a cab to the closest airport, which was 80 km, or 3 hours away.

Like many vacations, ours ended with a whimper instead of a bang. All the same, I’ll look back at Darjeeling very fondly, but that was almost entirely due to my most amazing travel partner, Christine. Without her, this trip wouldn’t have happened, and even if it had, it wouldn’t have been as fun. We pushed each other to try new things, and we generally covered for each others’ shortcomings.

They say India changes a person, and I have a suspicion that it very well may have. But, I’ll save that post for another day. If nothing else, India has taught me the importance of patience (and persistence).