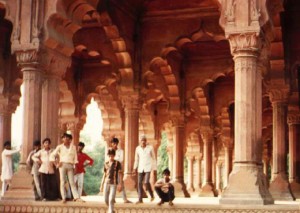 Sometimes, stereotypes are true. In fact, they are true a good deal of the time. So far, I’ve found every single stereotype about India to be spot-on: the traffic, livestock in the streets, abject poverty paired with incredible sights. When I walk down the streets, I feel like I should be in a movie about India, not actually here.

I got off to quite the inauspicious start upon my arrival in Delhi. I’m an experienced enough traveler that I should have seen this difficulty coming, but alas, I did not. I had arranged for a pick-up, and even called them when I arrived. Then, I stood at my assigned spot outside the airport for a good half-an-hour before losing my patience and taking one of the readily available taxis. It was a rip-off, sure, but at 3 AM, all I really wanted to do was get a few precious hours of sleep.

The hostel owner was, perhaps, rightly upset when I arrived. He explained that his brother had been circling the airport looking for me. I apologized profusely and explained that I had no way to contact him (the pay phones are inside the airport, and travelers are not allowed back in once they leave). He seemed to be understanding, and then showed me up to my room.

I would have been happy to have slipped up there quietly, but instead he turned on the bright florescent light, waking the two girls who were already there. Great. For the second time in as many minutes, I was apologizing to complete strangers over something that wasn’t really my fault.

My rest was short-lived and fitful–the sort of sleep that jet-lag is notorious for producing. Around 8, I was awoken by the manager showing in the newest guest to the hostel, my friend Christine. We hugged and tried our best to keep-in our exuberance, lest we wake up the other travelers again.

After catching up for a bit and eating some complimentary breakfast, we hit the streets of Delhi, trying our best to stay ahead of the exhaustion.

I made it approximately a half of a step out of the front door before tripping over the metal door-frame that I failed to successfully navigate. This led to two thoughts: 1) Perhaps sandals were not a wise choice, and 2) I need to be much more careful in this country.

We started off with a long subway trip to Old Delhi, to see the Red Fort. Just finding the subway was a challenge. Seoul, with its brightly colored, easy-to-read signs, had spoiled me. However, with the help of a man running a juice stand, we found the subway. Despite the difficulty finding it, the subway was actually very clean and ran at quick, regular intervals.

The Red Fort was impressive, although we both openly questioned its supposed 30+ meter height. Inside, we were treated to a few nice views, but nothing really to write home about (so, I won’t). We meandered around the open grounds, trying our best to avoid tour guides who were enthusiastically proffering their services. When we decided to rest, we quickly noticed that we had become the center of intrigue among the locals. Every few seconds an Indian would come up with a camera or a phone and snap our picture. Some of the more polite ones asked first.

I tended to take this slight invasion of privacy better than Christine. Life at English Village has prepared me well for random pictures with (or from) strangers. I figure I can either take five seconds and be a dick, or take 30 seconds and leave them with a rare good impression of foreigners.

After, we weaved through the back-alley bazaars around the fort. At one point, my navigational skills were called into question, but we made it back to the metro station after only half-a-dozen or so wrong turns.

The return train seemed to take longer—the exhaustion had taken its toll. From the station, we made our way to the Garden of Five Senses. There, we laid under the glorious shade of a tree, watched the squirrels and birds bound between the branches, and just enjoyed the sights, smells, sounds, and feel of India. I could have tasted the dirt, perhaps, but I decided to forgo the last of the senses.

A “quick” nap turned into a three-hour jet-lagged-induced coma after returning to the hostel. We woke up just in time for some curry, our first “real” meal since our arrival.

After trouncing around the city, we sat in the lobby of the hostel, sharing a couple of cold beers. “Today was almost perfect,” Christine said. I’m inclined to agree. It was a great start to what promises to be a great trip.

We decided to make short work of Delhi, and head straight to Agra the following day. Two weeks is not nearly enough for this amazing nation, but we’re going to try to see as much as we can.