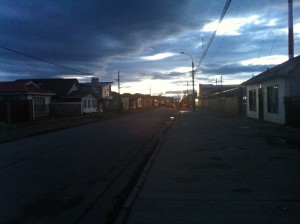 One of our only photos from Punta Arenas.

At various points throughout Patagonia, we had declared ourselves to be at “The End of the World.” Clearly our perceptions were flawed, as there was always somewhere further down the road to go. But by the time we reached Punta Arenas, this “End of the World” assessment was gaining some degree of truth.

Punta Arenas was never on our radar when we set our sights south to the expansive, windswept lands of Patagonia. Indeed, I suspect it rarely is, other than for a launching point to hiking nearby Torre del Paine or communing with the large colonies of area penguins.

This was not the reason for our stop in Punta Arenas. We had had enough of hiking in Patagonia’s beautiful, but terribly inclement conditions, and we had seen enough penguins to eternally satisfy that need. Nevertheless, we found ourselves in Punta Arenas. But make no mistake, we too were mere passer-throughs.

To us, the most notable part of Punta Arenas was its airport, which promised to get us the hell out of there. The city planners must be commended for their decision to be the last major city before the area’s main attractions, and for providing such a quick get away for the rest of us.

South America had yet again stranded us down with its inconsistent modes of transportation. So far, we had been collateral damage of a bus strike, been refused car rental because of an unfounded belief that a woman can’t drive a manual transmission, and learned that bus timetables were really more of a broad suggestion, not something to be followed precisely. We had wanted to take the ferry north from Puerto Natales to Puerto Montt, which promised beautiful views of snow-capped mountains, fjords, and glaciers. When we arrived at the office in Puerto Natales the day before our departure, we were informed that the ferry wasn’t leaving this week due to ambiguous” mechanical failures.” Our Peruvian friend Alex explained to us, “This means they didn’t sell enough tickets.” It’s always good to have a local to translate bullshit euphemisms into English. Several weeks later, we finally got a refund on my credit card, which was more than I expected.

Our first thought when leaving the ferry office was, “This is what we get for trying to plan ahead in South America,” followed closely by, “So, now what the hell are we going to do?” We wanted to make our way back north, through the Lake District on the Argentine/Chilean border, on to Mendoza for some wine tasting, and finally up into Bolivia and Peru. The main question was “How?” To get to this point from Buenos Aires, we had taken a 20-hour bus, a 5-hour bus, a flight on an old prop plane, and another 5-hour bus ride. There were no direct bus rides to the Lake District, so at best we were looking at several long, overnight bus rides. This option would be slow, and surprisingly expensive, so we decided to start looking into flights. After a great deal of shopping around, the best we could do was a flight that left from Punta Arenas to Santiago. We would have to skip the Lake District altogether, but at least this plan got us moving again. 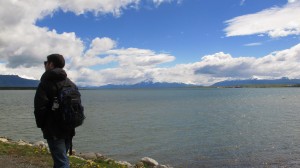 On the shores of the infinitely nicer city of Puerto Natales.

Punta Arenas wasn’t necessarily a bad town, but it wasn’t anything special either. It could have been anywhere, which is maybe why it felt like nowhere. It held neither the charm nor the backdrop of beautiful snow-capped mountains of neighboring Puerto Natales. The city was so nondescript, I was only slightly surprised to discover that we hadn’t taken a single photograph while we were there. Christine can hardly be served a coffee without whipping out the camera with great enthusiasm, and yet, Punta Arenas was never recorded on digital film. (Correction: There were actually 14 photos taken in Punta Arenas, all by iphone, of which only six were not taken in a restaurant or cafe, and three of those six were of puppies who tried to follow us back to the hostel).

We did take the time to amble through its streets, visit its shops, walk along its abandoned ocean front, and try to gather the least bit of appreciation for this city. The Chilean version of the Patagonian flag flew in its brilliant blue and gold from a few token buildings. Christine and I argued at length about whether the flag was in fact orange or yellow, mostly for entertainment purposes. An agreement was neither sought nor made.

Our stay was memorable for being unmemorable, other than for the ever-pervasive wind. Below 40 degrees south latitude, the wind is notoriously strong. The wind whips around the globe, nearly unimpeded by land until it reaches the narrow tip of South America, creating the “Roaring 40s,” “Furious 50s,” and the “Screaming 60s.” The further south you go, the stronger the winds. At 53 degrees south, Punta Arenas marked the southernmost point of our adventure, and thus the windiest.

Our hostel was a squat, poorly constructed, one story structure, that once inside gave the impression of being two buildings that had been scrunched together. The entrance was obviously the owner’s living room, complete with a couch facing an old TV, family portraits, and some rather cheesy paintings of Jesus and various popes. Our room was small and drafty, as the howling wind worked its way through the loose boards. Occasional bands of heavy rain pounded against the roof and windows.

The wine had its usual liberating effects, and before long we were having one of those “State of the Non-union” talks. Our positions had long been known, to ourselves and each other. I wanted Christine to be my girlfriend, and she steadfastly refused to be in any relationship. But tonight, in the cold, drafty, dark hostel at The End of the World, things would change.

The subject was brought up, more out of tradition than expectation at his point, and suddenly some very peculiar words came out of her mouth. She stated, almost nonchalantly , “Well, you never asked me to be your girlfriend.”

Technically, she was right. I had never asked because I knew what the answer would be. With this door so tantalizingly left ajar, I asked, “So, uh, will you be my girlfriend?”

The question hung in the air, the one thing unlikely to be swept away by the wind. Mere seconds stretched for eternity until she smiled and said, “Of course I’ll be your girlfriend! I’m crazy about you!”

Even in the middle of nowhere, life happened. And a place with nothing particularly special about it, became the most memorable destination of a trip filled with famous and spectacular destinations. We had reached the End of the World, or at least within shouting distance of it, but for us, the journey was just beginning. But first, we needed to catch a plane. 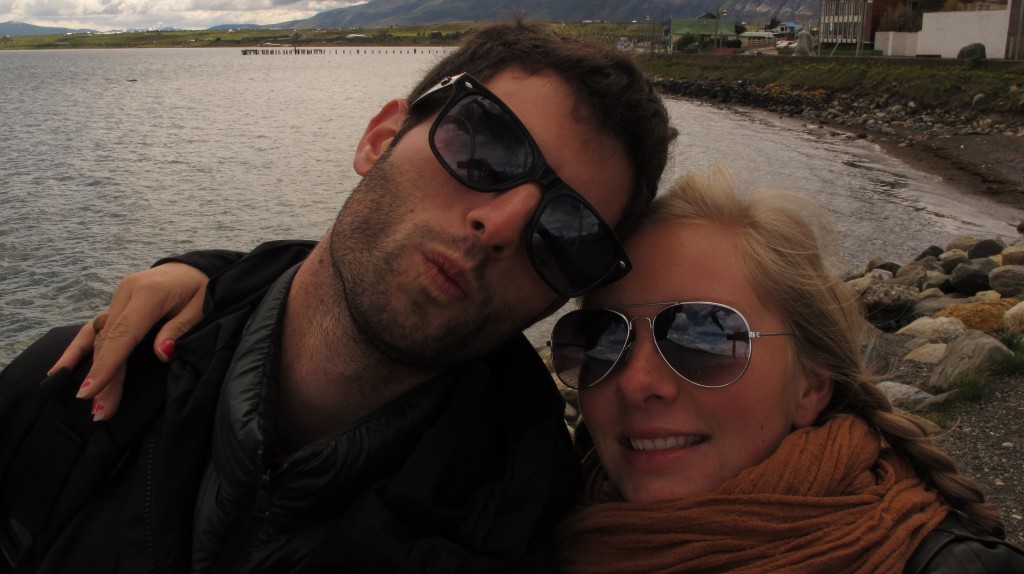