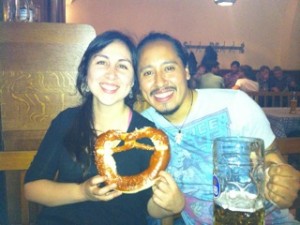 In the midst of catching up with our couchsurfing friends Alex and Fernanda, from Peru and Chile, respectively, Christine turned to me and said, “This is so great, even I want to write a blog about it!” Hint taken, and she was 100% right on the matter, but don’t tell her, I don’t want it going to her head.

We first met Alex and Fernanda in  Chilean capital of Santiago, when we couchsurfed with them for a night.  Although Santiago was never on our itinerary, we somehow found ourselves there not once, but twice. The first was a rather lengthy layover in which we became quick experts on the best place to sleep in the terminal. We would have left the airport, but Chile has a rather curious policy of charging Americans who are arriving into Chile by plane (but not by bus, car, or pogo stick). The fee of around $150, plus fare into the city and back, made the notion of a lunch out on the town an impractical one to say the least.

Our second stop in Santiago was just as unplanned as the first. We found ourselves more or less stranded in Southern Chile when our ferry out was unexpectedly canceled for “maintenance issues.” The real reason for canceling the ferry remains a mystery to this day, but our guess is that they didn’t sell enough tickets.

Regardless, our choices were suddenly limited to either overspending for plane tickets, or overspending for bus tickets. Flying would at least allow for a hasty exit to our Patagonian adventure (and after a few weeks of blistering winds and cool temperatures, we were ready to go). In short, the extra money seemed like a bargain compared to another 20+ hours on several different buses to get us (generally) where we wanted to go. The downside was that we would miss out on the Lakes District on the Chile-Argentina border, which everyone told us was a “Must Do.” Given unlimited time and money, this “Must Do” would have become a “Done,” but we had limited amounts of both, so we boarded the flight for the capital, with plans to get to Bolivia and Peru as quickly as possible.

However, it wasn’t all bad news. Before our departure to warmer and more hospitable locales, we shared a bottle of fine Chilean red, in the cold, dark, and rather desolate hostel in the lonely outpost of civilization known as Punta Arenas, during the course of which we broached the subject of our relationship. And after a year and a half of being in some sort of relationship limbo, we finally agreed to make it official.

Almost as an afterthought, we sent out a few couchsurfing requests to hosts in Santiago. Our couchsurfing record so far in South America had been nearly non-existent. Travel around the continent proved to be chaotic at best, which made it very difficult to contact potential hosts and secure a place to stay for a night or three. With this latest round of last-minute requests, we didn’t really expect to find anyone willing to host us, either, but we still sent out a handful of requests from what was perhaps the only place in town with Wi-Fi.  When Alex offered us a spot in his spare bedroom, we were as thrilled as we were shocked. I must add, while I’m on the topic, Alex gave us some of the best and most comprehensive “How to get to my place” e-mails ever.

We arrived fairly late in the evening, but it wasn’t too late to share a few bottles of wine and some food. Alex and his girlfriend, Fernanda, treated us as they would old friends, and we quickly felt the part. We found out that they met in similar serendipitous fashion to us; for them it was on an 11-hour bus ride as opposed to a quick visa-run to Korea, for us.

Our stay in Santiago only lasted a day (we barely cleared the 24-hour mark), but we remembered that evening fondly, and when we left, we did share some regrets that we didn’t stay a bit longer. 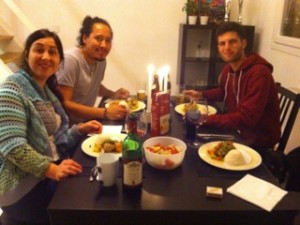 As Bill Cosby was fond of saying, I told you that story so I could tell you this one. Fast forward a year later, Christine and I have been a stable couple since those fateful moments at the end of the world, and the roles are reversed: Alex and Fernanda are traveling, and we’re settled in one location with 40-hour a week jobs. To my pleasant surprise, I woke up one morning to find a Facebook message from Alex, announcing that he and Fernanda were in Europe, and asking if we could host them when they stopped through Munich. Barring a death or serious illness, there was no way we weren’t going to host our fellow couchsurfers.

Unlike Alex’s peerless directions, I gave shoddy ones, at best. After sending it, I realized how severely lacking my own directions were, and it required several more messages, often after further and necessary prodding from Alex.

Either way, and as fate would have it, I found the two travelers, overstuffed rucksacks in tow, on my train, in my car, on the way home. Within an hour we were out again, searching my little suburban neighborhood for a place to get a decent beer and food.

Christine couldn’t join us this first night, as she was still in Denmark for a long weekend. When she did arrive the next day, it was back to the old habits we had started in Chile, only this time half a world away. The next night, our guests made us a hearty home-cooked meal, and we provided the beer and wine. Of course, we had to apologize for our German wine, which sadly pales in comparison to the wonderful selection of Chilean vino that we had available to us on our travels. 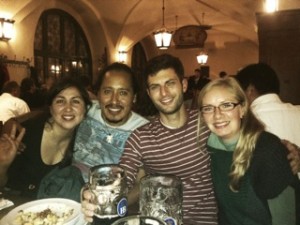 We thought no trip to Bavaria would be complete for our guests without a visit to one of the many fine beer halls, so we ended up in the grand, if not still touristy, Hofbrauhaus in the city center. Inside, we shared beers and stories about our once and future travels, all the while being serenaded by men in lederhosen playing polka music. It was, perhaps, as far away–culturally and physically–from South America as possible, which is exactly why we go on these adventures.

If there’s one thing I’ve learned from couchsurfing, it’s that the common connections that we share as humans can lead to real and meaningful friendships, regardless of the brief time available to nurture those relationships. When I met Christine in Seoul a few years ago, there was an instant connection, even if it took years to fully realize its implications.  And when, as a newly “Facebook Official” couple, we first met Alex and Fernanda a year ago, there was a similar connection. The connection was between travelers at heart, those who seek to push their own physical, mental, and emotional boundaries to discover the deeper truths about themselves, and the world around them.

But for now, we have already wished our friends a fond farewell, with the great hope, if not expectation, to see them again in a location to be determined.

← An Open Letter to the Woman I Accidentally Molested
Finding Dog →

5 comments for “Behold, The Wonders of Couchsurfing!”