Slow Boat on the Amazon 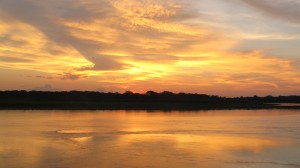 As I said in my first piece about the Peruvian Amazon, there are only two ways in and out of Iquitos: by air and by boat. The boat sounded like a great option for our departure. We would have room and board for five days, get a bit closer to our ultimate goal of the capital city of Lima, and it would be significantly cheaper than flying. Along the way, we would get to see life on the Amazon up close and personal, and have the cultural experience of traveling like the locals.

We first boarded the riverboat which would become our home, Henry 1, on the morning of the departure day. Our goal was to secure one of only four cabins. This turned out to be a chore. First we had to find the captain. We made several laps around the boat, getting pointed in various and contradictory directions by the crew, until we finally found him. In Spanish, we had to explain that we would very much like a cabin for the trip to Pulcallpa, and we would be more than happy to exchange money for tickets. I would have thought a few hundred soles would have made him happy, but it took quite some convincing to actually get him to sell the tickets. The conversation went something like this:

Me (in horrible Spanish): We need to buy tickets to Pulcullpa. We want a cabin.

Him: (Something I don’t understand) …come back tonight.

Me: We want to buy them now.

Me: Can we buy them now?

Him: (Something completely incomprehensible).

This went on for about another ten minutes until finally, he reluctantly sold us the tickets, mostly just to get rid of us, I think.

For our final preparations we spent a great deal of the day buying food and drink to bring on board, as well as two brightly colored hammocks to hang from the rafters on the boat. We arrived at 5:30 in the evening, and waited for the six o’clock departure. As it turns out, the six o’clock departure was closer to midnight, which I guess is considered “on time” in South America. 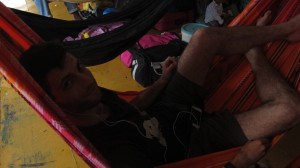 Chilling in my hammock.

The flamboyantly gay ship cook woke us up the following morning with our breakfast. This would become our routine. At first the meals were little slices of joy, but by the last day the repetitive service of bony Amazon river fish, rice, and beans were nearly enough to send us straight to the toilet. At least we were finally moving and the rain forest stretched out on the horizon in all directions. The hustle and bustle of traveling wound down to a crawl as we adjusted to life on the river. A great number of hours were spent simply swinging in our hammocks and reading.

We were the only two foreigners on the boat. We were clearly memorable to the staff–they were waiting for us with our cabin key when we boarded hours after buying the ticket. All the other passengers had to sleep in hammocks, the vast majority downstairs, packed in together tightly. Instead, we lived in relative comfort, at least for the first three days, until the the second floor became just as packed as the first.

Early on the second day, the noisy engine was silenced, and passengers began gathering to look at something on the port side of the ship. We saw another Henry, Henry 4, stuck along the banks of the mighty Amazon. We did the most logical thing, ramming the other vessel with some force. After that didn’t work, the boats were tied together, and we helped free the unfortunate boat. In the meantime, several Peruvian women attempted to sell fruits to the passengers on the other boat. Arms reached across the narrow gap between ships, exchanging money for mangoes and the like. Aside from the meals and a brief thunderstorm, that was all the excitement that day.

If we did not awaken to the sound of the cook knocking our door, a parrot belonging to the woman in the adjacent cabin would do the trick. Every morning he would cry out with an endless series of “Holas!” I thought the trick was funny the first time I heard it, but by the third day, I had visions of tossing the bird, cage and all, overboard, gleefully shouting, “Adios!” as he hit the water with a satisfying splash.

About halfway through our journey, we had to restock our supply of fish. Once again, the engine was silenced, and we dropped anchor near a couple of local fishermen who had a canoe full of live, squirming fish. They scooped up several buckets of fish and handed them to our crew. When they were finished, they paddled back to a holding pen, and started haphazardly tossing the (temporarily) lucky fish into it. About 20% of the fish missed the pen altogether, and were free again, but the fishermen continued to scoop and toss the fish with reckless abandon. When fish was served for lunch, we were hardly surprised. 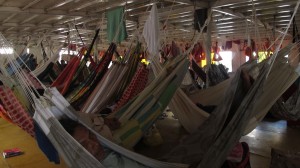 We spent a great deal of time and energy conjecturing when our riverboat journey would finally come to an end. They told us five days, but did that include the first day? Were we running on time? From time to time we asked around, and received a different answer with each response. Now, the boat was crammed with passengers. The hammocks were being strung up with dizzying speed, and our relaxing little spot became anything but. Reluctantly, we took our hammocks down, and retired back to our cabin, thus freeing up a bit of desperately needed space.

Pulcallpa finally appeared on the horizon the morning of the sixth day. We could not get off the boat quickly enough. Our stay in Pulcallpa only lasted a few hours, and then we were off to Lima for our final couple of days of our big trip. Just as soon as it began, our days in the Amazon were over. It was not an easy place to travel; it was hot, humid, and the bugs were horrifying. However, there was a particular romance to it, and we both had an affection for the sights, sounds, and people we encountered along the way.

When we finally arrived back in civilization, in the form of the capital city of Lima, we took the best showers of our lives and decided to treat ourselves to a nice dinner that was not rice and fish. Naturally, we settled on sushi.