This is the second part of my adventures in Puerto Madryn, Argentina. Part 1 can be found here. 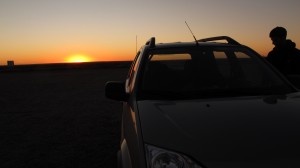 As the sun slowly set over the Patagonian desert, Christine and I had a decision to make. We had checked out of our hostel in Puerto Madryn, assuming all along that we would be camping in Peninsula Valdes. Unfortunately, the change of plans from the car rental debacle was still having adverse repercussions, and we were nowhere near the park as the sky grew dark.

Do we find camping outside the park, or make the long haul up to the Peninsula, which was still a couple hours away? We chose the latter, and in doing so, ignored Gaston’s advice about driving in the park at night.

If following Gaston’s advice only gave us headaches, then theoretically ignoring it should pay off, right? Somehow, that logic worked out, and the night drive through the park was without incident. After a bit of searching, we found a reasonable place to camp inside the park. The night was cold, but calm. We put the tent up in a few minutes and crawled inside for some much-needed rest.

If I remember nothing else from Patagonia, it’s this: the wind. The light breeze from midnight became a persistent, howling wind by 4:30. The wind was enough to uproot our tent stakes, and Christine’s side was threatening to flip over, taking us with it. Thinking as quickly as we could after far too little sleep, Christine went out to take down the tent, while I rolled up the sleeping pads and sleeping bags inside—serving the purpose of both cleaning up, and preventing everything from flying away. It was a bit awkward, but we managed to get everything into the car and on the road (making sure to first crank up the heat).

Fortunately, if such a word can be applied to such a rude awakening, we needed to get up anyway to drive to the eastern lookout in hopes of seeing orcas hunting at high tide.

For days, the talk of the town had been the orcas. They had just arrived for their yearly migration, and they could be seen during high tide on their twice-daily baby seal hunting missions. They would wait for the baby seals to mature enough to swim in the ocean, and then swim up the shore to snatch them up. Yes, orcas, while undoubtably intelligent and amazing beasts, are kind of dicks. Everyone had stories about seeing—or knowing someone who had seen—these great black and white porpoises (and yes, they’re porpoises, not whales, as they are often called). We had to try to see them.

So, with the stars still bright in the early morning sky, we headed back out. Despite having made it to the peninsula the night before, we still had 80 kilometers to cover to reach the hunting grounds. Along the way, we were treated to a spectacular sunrise, one which rivaled the sunset from the night before, and by the time we reached the lookout point, the sun was a bright yellow ball slowly rising over the open ocean. The wind continued to whip about violently as we waited and watched.

We should have been thrilled to have seen elephant seals and sealions, but we were really hoping to see the orcas. Unfortunately, all was quiet on the eastern front, spare for the occasional loud honking sound of an elephant seal. Christine had made the declaration that we wouldn’t be disappointed if we didn’t see orcas, but we were both a bit disheartened.

However, there are other fish (or, rather, marine mammals) in the sea, and we had to head back to book a spot on the whale watching tour, back near our campground on the southwestern corner of the peninsula. 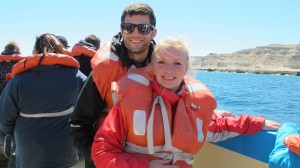 The whales in question were Southern Right Whales, and they were not nearly as stealthy as their black and white cousins. The tour was originally going to leave at 10, but was pushed back to noon due to the high winds. This was perfect for us, since it allowed for a couple more hours of precious sleep. We didn’t bother putting the tent up this time, but instead just passed out in the car.

The tour was flat-out incredible. We saw at least half a dozen of these giant, peaceful animals, and several times they came right up to the boat. Near the end of the tour, two whales—a mother and her baby—slowly approached the boat, and swam along with us for several breathtaking minutes. Finally, they took one last, deep breath, raised their tails, and disappeared into the inky depths. 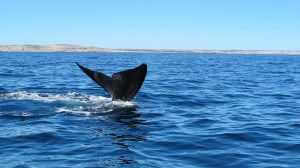 After the tour and a late lunch, we made one last dash to the eastern edge of Peninsula Valdes, hoping that luck would be with us this time. It was not. We came prepared for the long wait with a bottle of fine, Argentine wine. It was a move that gained the approval of a local. He raised our hopes by telling us he had just spotted two orcas, only two kilometers away. We decided to make a dash to the other lookout point, and again, we saw nothing. As the sun set and the temperature dropped, we eventually had to face the reality that we would not see these great creatures, not this time.

The moon, nearly full, now shone brightly to the east, over the dark waves of twilight. With a sigh of disappointment, we returned to the car and headed back west through the park. The desire to see more still burned inside, but by no means could we be disappointed with the few days we had in and around Puerto Madryn. We saw whales, penguins, seals, sealions, and they were all set against the amazing and unique Patagonian landscape.

We were not finished with Patagonia, not by a long shot. The next stop was El Calafate, near the southern tip of South America, for snow-capped mountains and glaciers.