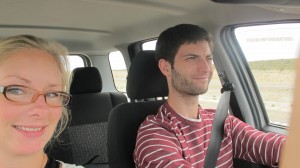 Day 1 of our road trip around Puerto Madryn.

So far, Christine and I have had a momentum problem. Every time things seem to be going well, a random bit of bad luck comes along and knocks us on our asses. Case in point: we were due to leave Buenos Aires on Monday night (already a day later than we would have liked) when the bus drivers for our bus line, and only our bus line, decided it was a good night to go on strike.

Of course, the agents at the bus company wouldn´t tell us there was a strike straight away. First, we were told it was running late. Then, we were told there was a “conflict” with the drivers, and to please go wait for 30 minutes, or maybe 2 hours. And finally, that no buses would be running that night, and no, we will not give you your money back. Muchas gracias.

Thankfully, the strike ended the next day, and after 20 hours on a bus, we had officially arrived in Patagonia, in the small city of Puerto Madryn on the east coast of Argentina. We were more than ready for our luck to change, and we could feel the winds changing around us. However, we would run into one more small hurdle in the form of an equally small man, Gaston, the hostel owner of Hi Patagonia.

At first, Gaston was seemingly impressive in his knowledge of the local area, and genuinely seemed like he wanted to help us have a great time, and do so in a way that wouldn’t break the bank. We agreed to rent a car along with a young German couple, decided on an itinerary, and agreed to meet up bright and early the following morning.

The plan was to pick up the car, head down to Punta Tombo, the largest penguin colony in the world, then head back toward Puerto Madryn, with a brief stopover in Playa Union to see the small, black and white dolphins that populate the nearby sea. Finally, we would camp in Peninsula Valdes, and spend the next day whale watching, and trying to spot the plethora of other wildlife scattered throughout the park.

Gaston, who, I must reiterate, came up with this plan in the first place, had a quick and decisive change of heart when we went to pick up the car around 7 o’clock. The decision came after Christine mentioned that she preferred automatic to manual transmission, and this comment transformed in his mind to, “I can’t drive this car.” He declared in very dramatic fashion, “You are not comfortable to drive, I will not let you rent my car.” The four of us sat there, stunned. Continuing his drama queen ways, he then picked the car keys off the table, flung them onto his desk and once again declared, “You cannot drive my car.”

We were at a loss. We still needed a car to get to these close-but-not-close-enough locales, but the rental car agencies would not yet open for several hours to come. Plus, we were furious. He was demanding an International Driver’s License, which only Christine had (and was unnecessary for driving in Argentina). Christine felt guilty about her off-handed comment leading to his change in mood, but she really couldn’t be blamed. Knowing how to drive a manual is required for getting a license in Denmark, but that fact would not persuade the little man standing before us. Gaston was simply being unreasonable.

While it was a setback at the time, we managed to get a rental car and on the road by 11 o’clock. We decided to try to see the dolphins first, and this would be our last bit of bad luck for two days; the tour (which Gaston told us was at 3) left at noon, about an hour before we arrived. At this point, we had had enough. We had a mediocre and expensive lunch in one of the few restaurants that was open, then headed down to the beach, and collectively let out a cathartic scream into the crashing ocean waves. We laughed, vowed to see some god damned penguins, and climbed back up the beach, pausing only briefly to take inappropriate photos with dolphin statues, before getting back in the car and heading to Punta Tombo. 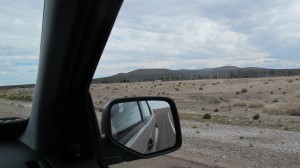 The rest of the drive was longer than expected (yet again another thing that Gaston was wrong about), but absolutely spectacular. The Patagonian landscape is desolate, with only the occasional small tree punctuating the yellow-orange dirt and random patches of grass. Wildlife was rare and cars were rarer still.

The road to Punta Tombo eventually became a dirt one, and stayed that way for over 20 kilometers. We didn´t arrive at the reserve until after 5 in the evening. All the tour groups had long gone, and it was just us, a family of five, a small group of nuns, and half-a-million penguins. Half-a-million is no exaggeration, and we didn´t have to wait long to see our first black and white bird nesting in a small hole under a low bush. And then we saw another, and another, and dozens more. 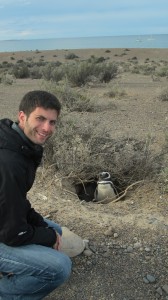 Me and my penguin friend.

Penguins were everywhere, without so much as a fence between us. We shared a path—one only vaguely marked by white stones set 1-2 meters apart—with our little waddling friends, often pausing to let them pass. They were comfortable with our presence, too. One of the older penguins (they can live in the wild for 30-plus years) nested just on the other side of the boundary, and seemed to pose for us as we stopped to take photos. He (or possibly she) waited there within arms-reach, craned his (her?) neck in an adorable way that only already disgustingly cute animals like penguins can, and let us snap off a series of photos.

The sun soon began to set over the cold, windy, Patagonian landscape, and the thought of driving back on the dirt road after dark motivated us to move a bit sooner than we would have liked. With the sun setting over our shoulder, we took one last look over the yellow hills, waddling penguins, and blue ocean beyond, and it was impossible to call this day a bust. In fact, it was incredible.

We didn’t get to see the dolphins, and we would have preferred to have not had to deal with Gaston’s mood swings and bad advice, but traveling is about the adventure, and we certainly had one today. 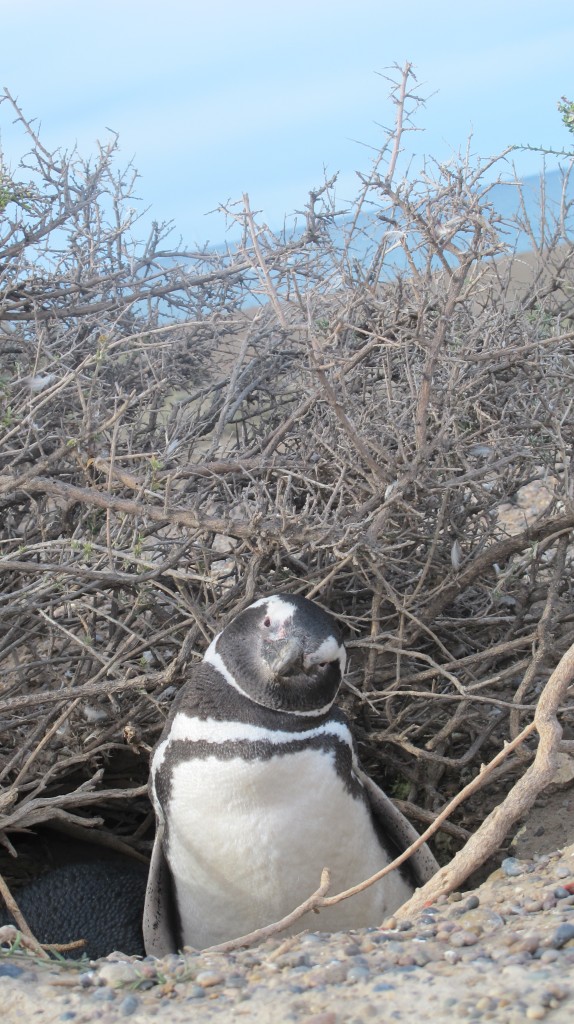