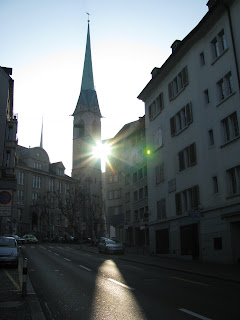 First of all, let me apologize in advance on the very real possibility that I will inadvertently use a “z” for a “y” or vis-versa. Or if I inexplicably use any one of the following characters: ö, ä, ü. I äm gingerlz picking mz waz through this Swiss kezboard wherein there are numerous extra characters and the z and y are reversed.

That said I am in Zurich safely, albeit without the majority of my belongings. You see, there was absolutely horrendous weather in the New York area (along with the majority of the Northeast and Midwest)which caused me to very nearly miss my connection (quite an achievement really, considering I should have arrived with about three hours to spare). After circling for a long while they finally cleared us to land, and when we finally broke through the ceiling, it became obvious to anyone paying attention (thankfully including the pilot)that there was no way in hell that we would be landing this plane…that is unless one would consider “crashing” a reasonable substitute. So we pulled back up and circled some more.

I had to run to my gate where they were in the process of boarding. Naturally I asked the gentleman at the gate whether my luggage would be transferred(seeing how I knew my baggage, aka Valerie, would be on the flight). He assured me, along with a nice Swiss man that transferring the luggage would not be a problem. Do you ever know you are being lied to, but you know there is nothing you can do about it? Yeah, well I figured I would rather be in Zurich sans belongings than in New York
with them.

Long story short, I end up in line with the aforementioned nice Swiss man in Zurich to report lost luggage. 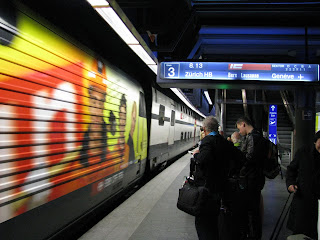 Other than that, things are going swimmingly. Valerie had had her seat assignment changed…which was a nice moral victory (let’s call it “seat chicken”) for me. I ended up sitting next to a wonderful Hungarian lady who spoke about 5 words of English. She was quite excited when she found out that I was going to Budapest (or as she said, “Budapesht”) and she talked my ear off about it…in Hungarian. I smiled and nodded. Well, it’s turning out to be a wonderful, sunny day in Zurich so I am going to get off this damned computer. Stay tuned for more updates, same bat time, same bat channel.[tb_google_map]