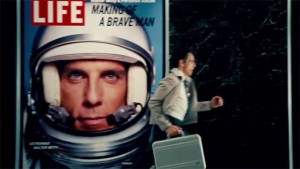 Author’s note: this is a follow up to my piece “Working to Live or Living to Work?”  And if you’ve not seen “The Secret Life of Walter Mitty,” this is my spoiler alert!

One of my favorite movies of the last year was “The Secret Life of Walter Mitty.” For a traveler, it struck just the right balance of awe, wonder, live-in-the-now sense of adventure, and personal development through experience.

My biggest problem with the film, however, was the timescale involved. We are led to believe that the main character goes from spacey, boring desk-slave to wise, globe-trotting rebel in a span of approximately two weeks.

Two weeks. A fortnight, if you will. There’s that time frame again–the standard vacation time for an American worker. Unfortunately, even within the realm of the highly implausible movie universe, it makes no goddamned sense, and because of it, I had more trouble than usual overcoming the necessary suspension of disbelief.

The movie expects us to believe that the main character, Walter Mitty, spends a couple if days hunting down a photo negative for Life Magazine, before deciding to hunt down his photographer friend who took the picture in the first place. Mitty must then jump a plane to Greenland, finding the Podunk bar where he can meet the helicopter pilot who can in turn, take him to a fishing boat in the North Atlantic, where his friend was last spotted. He then takes the fishing boat to Iceland, where he again narrowly misses his photographer friend, causing him to return to New York empty-handed (other than a new long board), which causes him to get fired, which leads to him chasing down his photographer friend across the Asian steppes, eventually finding him. Mission somewhat accomplished, he comes back stateside, only to get arrested by Homeland Security for a day. And he still has time to deliver the long-lost negative before the deadline (despite losing his job over it). All in two weeks.

In addition to the simple logistical problems, the film also expects us to believe that Walter has had a major life change, suddenly becoming extroverted, interesting, and adventurous. And we know this because he has a flute, wears bracelets, makes snide jokes about cheap flights out of Yemen, and no longer needs his online dating profile.

I can see why two weeks was an important number for the writers. It’s as if they’re saying, “Go out. Use your vacation and find adventure. Change your life.” Of course, more Americans should travel, but it’s not that simple, and it’s not nearly enough time.

I can understand why more Americans don’t travel, and when they do, it’s rarely abroad, mostly for logistical reasons. If you only have two weeks of vacation a year, and you use all of the days at once, that’s 16 days from your first Saturday off to your last Sunday. If you decide to go anywhere abroad, you’ll lose at least two days traveling, and be jet-lagged for several more; that means that you’ll only be able to fully appreciate your trip for about 10 or 11 days, maximum. And then you’re out of vacation time for the rest of the year, have fun working in your empty office between Christmas and New Years. Americans might make fun of Europeans for taking August off, but suddenly those couple days of travel and a few days of jet-lag represent a much smaller portion of the trip, and allows the would-be vacationer more time to relax and appreciate the surroundings.

The best, most adventurous, life altering trips take a lot longer than two weeks, and they take a great deal longer to have any lasting impact. I’m not saying you can’t have a great, life-changing trip in that amount of time, but obviously the longer the trip, the more immersed in the you become in the experience, and the more likely it is to affect change. To fully free your mind to new cultures and experiences, it helps to not have the burden of work and “normal” life hanging over your shoulder like a dark cloud. The moment you start thinking about the return, your mind is forced to be in two places at once. You think about paying bills, answering work emails, and being back in rush hour traffic during for your daily grind. You need to not be burdened by your impending return to real life in order to free your mind.

Sure, the protagonist lost his job, so theoretically he could have stayed on the road as long as he had money, but he still had his all-consuming mission to complete, job or no. I don’t see how he could have been so obsessed with finding this photo on one hand, and the ability to fully appreciate his new surroundings and experiences on the other. Nor do did the film give any decent amount of time to pass in order to fully appreciate and think about these life changing events.

The things you see and experience need time to marinate, both during the trip and long after. Before we went to India, Christine repeated the advice given to her by a friend, “They say that you appreciate India much more a few months after leaving than when you’re in it.” This was undoubtedly true. While you’re in it, India is oppressively hot, and you find yourself constantly cringing from the filth and smells. You become annoyed by the nonstop haggling over prices and services, and even if you’re not claustrophobic, the massive ubiquitous crowds can put the most stable of people on edge.

When you’re in it it, traveling in India seems more like a masochistic chore than an enjoyable cultural experience. But when you leave, the great parts of the trip start to rise to the surface. You remember the awe of seeing the Taj Mahal in all its glory. You remember the boat ride on the Ganges, and the sunsets over the temples of Khajuraho. You remember the packed train ride not so much for its hot, stressful environment, but with a sense of accomplishment for overcoming your fears and inhibitions. The rest of the difficulties, stresses, and unpleasant experiences only help to better frame the culture and experience, and provide some pretty great stories along the way.

All of this takes time to process. Sure, I was only in India for about three weeks, barely longer than Walter Mitty’s adventure, but the true significance of the trip did not become apparent for several more months, if not years. The same could be said of all of my trips, all of which have had a much greater long-term lasting impact than just the relatively brief stay in the new country.

Travel can be life-changing. Indeed, it should be life-changing. We live in a world with vast cultural differences, and yet within those differences, we see striking similarities, because wherever you go, people have the same desires to live and to love and to find happiness. The more we travel and experience, the more we can put our own problems in perspective, and the more we can sympathize with and appreciate other people, cultures, and ideas.

Regardless of the glaring logistical problems, I still greatly enjoyed the film, and if you’ve not checked it out, I would highly recommend it. In the meantime, enjoy one of my favorite scenes from the movie: