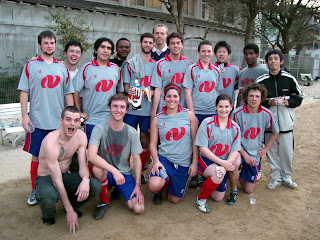 Well, as you may be able to tell the Fightin’ Nagasaki Fly Hawk(s) FC finally showed their full potential and won the first game of the season! However, the game was not without some pregame drama as a riff between players and management became fully apparent. There are these two players, Chris and Owen, who have obviously been hit in the head too many times with hockey sticks. They both play for a hockey squad as well, and think they know all there is to know about soccer despite having never played competitively before. To make a long story short, Chris went off at Rob and I (on the team mailing list) for some really petty issues. Furthermore, Owen had been telling our players that we would be “thrashed” by Nagasaki University on Saturday (he must have figured we would miss him or something, both he and Chris had a hockey engagement–notice I didn’t say “game” because hockey isn’t a sport). If nothing else, this motivated the rest of the team and we came out swinging. The game was tied for about 30 minutes at 0-0, when we finally caught a break and made a successful attack on goal. The score was from one of our Japanese players, Kazuya. It was a low shot, the keeper appeared to have position but the ball somehow managed to squeeze on by him and into the back of the net. We took a 1-0 lead into the half, despite some good opportunities from the other team. Nagasaki U did not go silently into the night and struck back early in the second half to tie the score at 1-1. However, their goal (which was quite the spectacular header) would be their last shot on goal for the match. We spent the vast majority of the rest of the half attacking on their half of the field and eventually Aaron put away a corner to take the lead for good. The final score was 2-1 and it was an emotional win for Rob and I and a huge relief to the rest of the team. 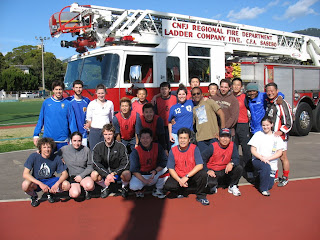 We took this confidence into our next match, though it was not a scheduled one. Halfway through our subsequent practice this weekend a couple of firetrucks pulled up next to the field and all of these firemen started piling out and putting on soccer cleats. Well, they had 11 men, and we had 11 men and women (total) so we figured why not have a match? We were a little embarrassed that they caught us without our uniforms, especially since they had nice, matching navy blue Sasebo FD sweats. And in typical Japanese fashion, this wasn’t enough, they brought out small red mesh vests to throw over their uniforms.It didn’t take long to figure out that we would absolutely dominate them. And dominate we did. Final score? 4-0. They were nice enough to let us pose for a picture in front of one of the firetrucks. This week we are off to play in Saga City against another ALT team on St. Patrick’s Day, should be a blast!*

The week certainly began strangely enough, with my predecessor, Kate, coming back to say, “Herro!” to everyone. From an outsider’s perspective this might not seem too odd, but it certainly was from my end. I would compare it to how they always warn time travelers in cheesy sci-fi movies (with the exception of Back to the Future, which was excellent) not to go see your past or future self. I think it was equally awkward for both of us.

Also on tap this week: Junior High School graduation! I really loved my 3rd year students, but I guess part of being a teacher is learning to say, “Good-bye.” Instead of class for the past few days I’ve had to attend hours-literally hours of graduation practice. They practiced everything from walking to the podium, to bowing together, to standing and sitting together and singing various songs. I remember our pre-graduation meeting going a bit differently. Something about, “NO MOONING THE CROWD!” or something…then we went out for pizza. Different culture.**

With the term winding down, I’ve been afforded a little more time to work on pet projects. I’ve taken full advantage of the time, as there are only so many Sudoku puzzles one can do without jamming a pencil into one’s temple. I’ve started work on a paper about Japan’s new militarism. I’ve completed about 25 pages in a little over two weeks-it might be 25 pages of glorious crap but it makes me feel better for accomplishing it! I hope to have a 40-50 page rough frame to help guide my future research finished by the end of March. So if you see any good articles about Japan, please send ’em along! No wikipedia articles…thanks. (Unless you find something really funny like one on Japanese Sex Robots or something). Well, I guess that’s all for now. Be sure to fill out your brackets! And send love!

*Said game was not a blast. The Saga team was apparently under the impression that we were playing rugby and absolutely abused us.

**Tomato Head to be exact.