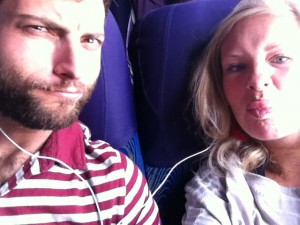 We arrived in Bolivia already half-dead from an epic 26-hour bus ride from Mendoza. The decision to “Get the hell out of here” came long before the wine capital of Argentina, but after working our way down to the southern tip of the country, this was the first realistic chance to do so.

I had never had the pleasure of crossing an international border on foot, but since the bus only took us as far as the Argentine border town of Salvador Mazza, we had to grab our gear, fight off half a dozen cart-wielding locals, all of whom were offering to lug our stuff to the border at competing prices, and walk the ten or so minutes to Bolivia.

As with any border crossing, we were hoping for a smooth transition. Unlike every other I have been a part of, I would not be granted such a luxury. Christine, having an E.U. passport, would have had no problems without me. Unfortunately, my dark blue, eagle-bearing passport created considerable headaches. I already knew about the $135 “reciprocity fee” imposed on U.S. citizens, but merely paying off the border guards would not suffice to see me through.

On Bolivian border regulations, the Lonely Planet has the following to say, “Bolivian visa requirements can be arbitrarily interpreted. Each Bolivian consulate and border crossing may have its own entry requirements, procedures and idiosyncrasies.” In this case, the “Requirements, procedures and idiosyncrasies” included passport-sized photos, and a copy of my passport (as well as the decidedly steep $135).

Had our lengthy bus ride arrived on time, this would have been only a slight inconvenience. Instead, our bus arrived in the middle of the siesta, the ill-defined break between lunch and dinner wherein the vast majority of shops close. So we were told to walk around the Bolivian border town to get what we needed, despite the fact that everything was closed. We wandered from shop to shop, being in Bolivia, but not yet officially. Finally, the owner of the photo shop walked up, unlocked the door, and within about ten minutes we managed to get the necessary stamps in our passports to satisfy any curious immigration official.

From there it was off to the bus station. Our ultimate goal was to get to the small town of Tupiza, where we planned to catch a tour of Salar de Uyuni, the world’s largest salt flat. Turns out Bolivia, despite its relatively diminutive size, is still a whole country and a rather hilly one at that. The upshot is that it would take two separate eight to nine hour buses to reach Tupiza.

First, we would have to take an overnight bus to the small city of Tarija. From our travels in Argentina and Chile, we had become accustomed to nice buses and—more importantly—straight, paved roads. While I would never claim that 26 hours on a bus is a “Joy,” I would replicate the journey (injured tailbone and all) in a heartbeat if given the option between it and a Bolivian bus.

Riding in a Bolivian bus is a complete, unrelenting assault on the senses. The experience starts when the doors open and your nostrils are greeted by the scent of stale body odor and cigarettes. Upon sitting down, your nerves immediately send out pain signals emanating from various points along the spine, and for taller travelers, from the knees, which are inconveniently, but necessarily, placed into the back of the seat in front of you. As soon as the bus starts, the driver fills your ears with the worst Latin music you’ve ever heard, which he will then decide to either play on repeat for hours on end, or search his collection for an even worse song. Even if the driver accidentally plays some decent music, it will be played at a volume which most rock musicians could only hope to achieve in their biggest, loudest, stadium concerts. Spinal Tap might even say these speakers go to “12.”

As if this were not enough, I would like to issue one last word of warning to the reader before jumping on a Bolivian bus: do not, under any circumstances, sit up front, and do not look out the window. The sight is one of endless hairpin turns around dirt mountain roads. The turns are nauseating to even the strongest of stomachs. This, combined with the terrifying, sudden-drop offs just beyond where guardrails should be, leaves you seriously contemplating death, either because of its likelihood, or because it might be a welcome change of pace.

Somehow, Christine and I survived two of these monstrous journeys on consecutive nights. Even more baffling were our arrival times; after eight to nine hours on a bus, we arrived in Tarija at 4 AM and Tupiza at 3:30. “Why,” we asked each other while shivering in the cold, pre-dawn, air, “would a bus leave at 7 in the evening, only to arrive in the middle of the goddamn night?” Why not leave later in the evening, and actually arrive at the destination city when things were beginning to open up?

So, we huddled together under a sleeping bag, cold but thankful to be off the bus at Tarija station for a couple of hours before we flagged down a taxi, and asked him to take us to a couple of hostels. We woke up the manager of the first one, and we were not terribly shocked when he told us to go away. Thankfully, the man from the second hostel did not begrudge us waking him up the way the first had, and he gave us a room for the day.

I believe we were asleep even before our heads hit the pillows. I awoke from my mild coma around noon, and Christine was already up, showered, and urging me to do the same, lest we waste our only day in this city. I will say this, for an accidental, not-at-all-on-our-itinerary-stop, Tarija was fabulous, and easily the best mistake of the trip. Its plazas, of which there were many, were a pleasure to stroll through, and the weather was indeed, “Spring-like” just as promised by the Lonely Planet. 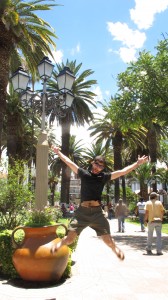 Happy to be in Tarija (and off a bus)

We shopped around the local markets, had a nice lunch, and I even had time to work in a haircut. Our return to the bus terminal was far too soon, and if we had known what a lovely city Tarija was, we probably would not have bought the tickets for our onward journey to Tupiza in advance.

This time, there was nearly no room for our luggage, as nearly all of it had been taken up by one small Bolivian in traditional Incan clothing. She seemed to be carrying all of her worldly possessions, and possibly those of several close family and friends. We had to store our bags on top of a crate of food, which the Incan lady was not pleased about, and an argument between her and the bus driver ensued. The matter was eventually settled, and we took our uncomfortable seats for another adventurous ride.

Again, we arrived in the middle of the night, and again, we huddled to keep warm as the sun made its gradual return over the mountains. Around six, we walked to the closest hostel, and to our amazement, they let us right in. Of course, we found out later that they charged us for a full night for early check-in, but it was more than worth it considering we hadn’t had a proper night’s rest since Mendoza.

We had finally reached our intended destination. Tupiza, the picturesque desert town, and the nearby salt flat awaited our exploration, but those are tales for another day. 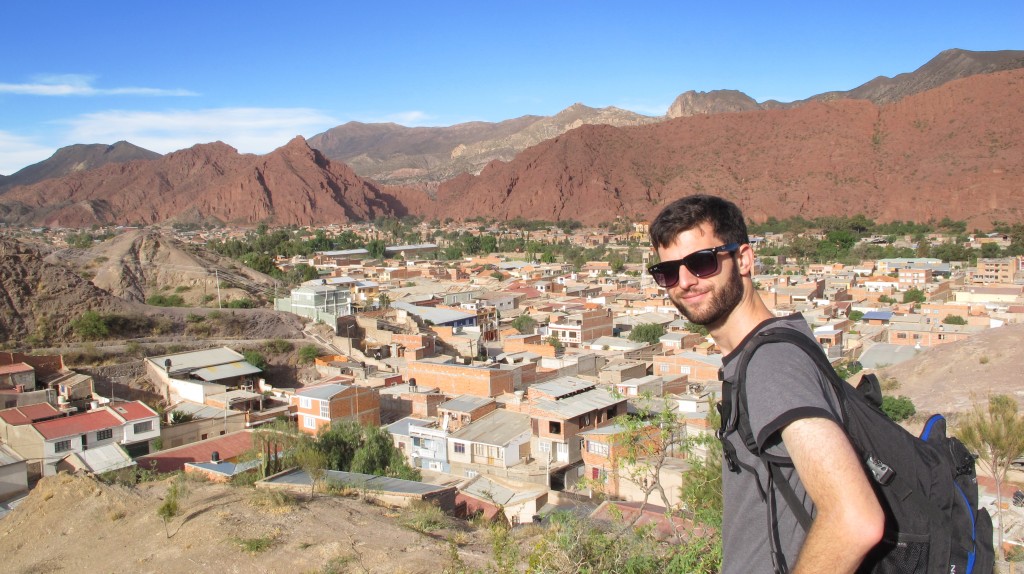