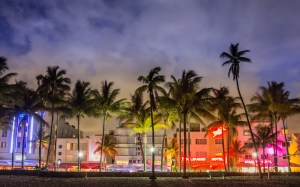 In the history of the U.S., Has there ever been a more iconic city linked to a particular decade than Miami was to the 1980s? Boston in the 1770s? Chicago in the 1920s? San Francisco in the 1960s? Regardless of your take on the subject, it’s certainly on the shortlist. And as it happened, this is exactly where I found myself.

Miami is a city of bright pastels of teal, turquoise, peach, all glimmering under the sun. To most outsiders, the colors are at best unique, and at worst garish, but for a brief time, the flamboyant colors exploded throughout America as 80s pop culture gained a foothold in the nation.

Miami had been cool for a long time, but in the 80s it became the “It” city. Miami Vice was a hit, and Don Johnson was about the coolest man alive. Somewhere in the archives of baby photos, there exists a picture of me in a white blazer, cuffs rolled up, with a pink undershirt. Am I wearing huge, black Ray Ban style sunglasses, you ask? Of course I am. The funniest part of this family photo is the complete lack of irony.

And then there was the small matter of Miami’s football teams. Sports teams, like commercial products and religion, rely heavily on childhood indoctrination to hook its consumers. Otherwise, how do you possibly expect otherwise intelligent folks to spend their hard-earned money and valuable time devoted to such meaningless endeavors?

I knew I was supposed to be a fan of the Green Bay Packers; I had been told of their greatness since birth. But children are especially adept at differentiating between cool and uncool; In the 1980s, the Miami Dolphins were cool, and the Packers were definitely not. The Dolphins had Dan Marino, one of the all time great quarterbacks, and they were consistently a playoff team. On the other hand, the Packers of the mid and late 80s were laughably bad. 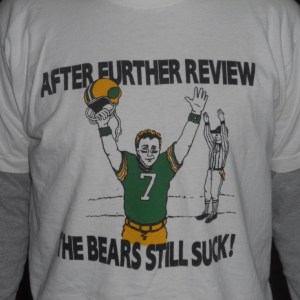 My one good childhood memory of the Packers was when Don “Magic Man” Majkowski managed to just barely not step over the line of scrimmage, and threw a game winning touchdown to beat the Bears. For years after that play my dad proudly wore a tee-shirt bearing Majkowski’s likeness and reading, “After further review, the Bears still suck.” (Also of note, the Packers, despite finishing with a better record than Miami that season, would still lose to the Dolphins).

So, when my grandpa Jerry bought me a Dan Marino jersey, I wore it a lot. I wouldn’t start seriously supporting the Green and Gold until the early 90s, when they actually started becoming a respectable football team. Sure, call me a fair-weather fan, but that’s a bit of a harsh accusation to level at someone who has yet to breach double-digits.

Surprisingly, the Dolphins weren’t even the most popular football team around. That distinction belonged to the college team the Miami Hurricanes, “The U,” who were in the midst of one of the most dominant stretches in he history of the game.

The Hurricanes, true to their name, were a force of nature, and one not to be taken lightly. They didn’t beat opponents as much as they pummeled them into submission. They were the bad boys of the game, and they wouldn’t have it any other way. All the same, they’re still remembered with a strange sort of nostalgia, one that led to the popular 2009 ESPN documentary: “30 for 30: The U.” Football fans look back at the 80s as, perhaps, more of a “pure” time–a time when your team could do elaborate, choreographed dances after touchdowns, make bone-crushing, concussion-inducing tackles without it being a personal foul, and the quarterback was fair game for injuring. In this sense, “The U” was pure 1980s football id.

Perhaps even more impressive than their many triumphs were the number of close calls along the way. The ‘Canes won their first National Championship in 1983, and they wouldn’t have to wait long to be back in the mix for their second. The 1985 National Championship was theirs for the taking, were  it not for some pesky orange-clad underdogs from the University of Tennessee in the Sugar Bowl; folks in East Tennessee still talk about that upset performance, the “Sugar Vols,”  with almost as much reverence as the 1998 National Championship team. The bowl game upset only seemed to make Miami angry, Hulk-smashing their way through the 1986 season with a perfect 11-0 record, outscoring opponents 420-136 along the way; though again, they would be narrowly upset in the Fiesta Bowl, costing them the top spot at season’s end. That elusive second national championship was earned with a perfect record in 1987, and they could have made it two in a row, were it not for a blown call against eventual National Champions Notre Dame in a 31-30 loss at South Bend in the famous or infamous–depending on your perspective– “Catholics vs. Convicts” game.  They would win it all again in 1989.

All told, they racked four National Championships between 1983 and 1991, a record-setting 58-game home winning streak that lasted until 1994, and probably the most personal fouls in the history of the sport. At least it seemed that way. 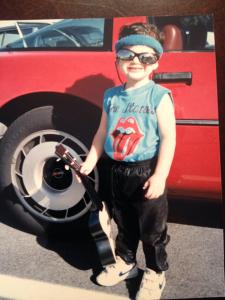 Having left South Florida when I was seven, I don’t remember a great deal about life there, and what I do remember is from snapshots of early childhood. I remember playgrounds, singing songs with long-forgotten teachers (oh, the exact terrifying predicament I currently find myself in), counting numbers in the passenger seat of my mom’s car, feeding my goldfish, Mr. Bongohead, and being told exactly which sofas I was allowed to sit on in my grandmother’s home. None of this is particularly helpful in discussing modern-day South Florida, but thankfully, having relatives there has afforded me a much more realistic view. And when I return there, I find a distant part of my sub-conscious self that thinks of this place as home.

I would challenge any city, town, or village to be more unique from a national perspective than Miami. It’s a city that would be far more comfortable as a major city or capital in Latin America than in the U.S. Spanish is the preferred language, corruption runs rampant through all layers of local government, and a healthy dose of drug money keeps the wheels of the local economy spinning. Columnist and Miami resident Dave Barry has long advocated for a sovereign South Florida state.

Not to be outdone, Key West decided in 1982 (there’s that year again), only half-jokingly, to secede from the United States, and declared themselves the Conch Republic. The mayor of Key West, now “prime minister,” quickly declared war against the U.S., only to surrender a minute later, and apply for $1 billion in foreign aid.

The Conch Republic, fictional as it may be, represents just how strange South Florida is. I’ve not been anywhere else in the U.S. that has felt like it. Perhaps the sights of suburban sprawl are the same, as are the congested roads, but the atmosphere makes you feel deserving of a fresh stamp in your passport.

And speaking of passports, entering Miami from South America was one of my most memorable entries to the United States. I had just arrived on an overnight flight from Lima, Peru, and was immediately pulled out of line by a Homeland Security agent. I was already under suspicion for doing the very un-American thing of taking the stairs instead of the escalator, and now I was under heavy scrutiny from the agent over my temporary passport (my real one had been stolen in Buenos Aires). I was eventually able to clear customs, but for all the Spanish being spoken around me, I certainly didn’t feel like I had left Peru. In fact, I wasn’t sure that I was in the U.S. until I saw my grandparents, and to my relief, they spoke English.

There’s simply nothing like South Florida throughout the rest of the U.S. Palm trees line the streets. Lizards scamper about over the sidewalks and walls. Alligators dot the inland waterways, though they are rarely fatal to humans (no attacks in a record-tying 5-years!). It’s a place that mixes Cuban immigrants with New York Jews. It has become a retirement community for a great deal of America’s senior citizens. And it occasionally forgets how voting works, especially when there are national implications.

I still have strong ties there, so unlike many other places I’ve called home, I find myself returning to South Florida often. It still seems like a foreign land, even when I know for a fact that I lived there for five years of my life. It might be strange, but our nation could use a bit more strange. Strangeness adds to our cultural identity, even if it’s just a bunch of Don Johnson look-a-likes in the 80s.