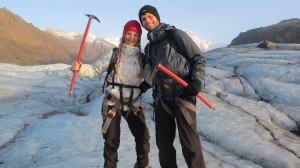 For a country that prides itself on fire and ice, there is certainly a great deal more of the latter at any given moment, than the former. Sure, there are upwards of 130 volcanoes in Iceland, and a great deal of volcanic activity, but even the largest of eruptions aren’t as noticeable as its vast glaciers, which cover roughly 11% of Iceland’s terrain.

And in the game of Volcano, Glacier, and Scissors, Glacier often wins. Throughout the country, odd mountains with mesa-like flat tops dot the landscape. These flat-top mountains are often the result of sub-glacial volcanic eruptions, wherein the mountain’s upward thrust was effectively stopped by the massive amount of ice on top. The largest of Iceland’s ice caps, Vatnajökull, takes up a whopping 8% of the country, and sits atop several active volcanoes. Even this impressive number doesn’t represent this icecap’s true proportions. Much like the surface of an ocean does little to help you comprehend the terrific depths beneath, so too does a glacier hide its true volume. Vatnajökull, for instance, has an average depth of over 400 meters (1300 feet), with some parts over a kilometer thick (3300 feet, or .62 miles). It’s one thing to see the vast track of white across a map, but to see it in person is an awe-inspiring sight. 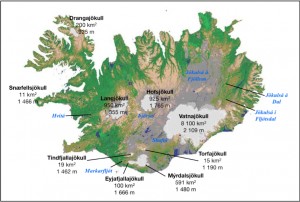 Vatnajökull is so mind-boggling huge, that I had difficulty processing what I was seeing. The glacier was often obscured by mountains, so we could only get the smallest of glimpses to its true size through various outlet glaciers, but even those were immense. And as we drove around it on lonely Route 1, the icecap seemed unending. For hours we drove, occasionally fighting fierce glacial winds, seeing new outlet glaciers, all pushing their way through, around, and over mountains. But all of these offshoots were just a tiny fraction of the whole glacial system. If we saw a total of 1% of the icecap, I would be shocked.

It was on one of these many outcrops, Svinafelljökull to be exact, where we decided to take a guided walking tour on the glacier. I must pause here to make a brief digression: by happy accident, this is the same spot where director Christopher Nolan shot Batman Begins and his most recent film Interstellar. If you’ve not seen the latter, I’d highly recommend it. Christine and I enjoyed it thoroughly, and for reasons entirely unrelated to the fact that we’ve shared a glacier with Matthew McConaughey.

When planning for this trip, we hadn’t given much thought into doing a glacial tour, but by the time we reached the tiny outpost of civilization that is Skaftafell, we decided to shell out some Icelandic Krona, strap on some well-worn crampons, and go on a guided walk around one of the glaciers. Although we had already climbed a glacier in Patagonia, there’s something about these giant blue-white rivers of ice that draws you closer. 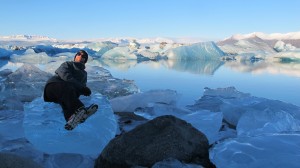 Lounging around at Jökulsárlón glacial lagoon.

Glaciers are a rare beauty in this world, and they’re becoming rarer. Iceland’s glaciers are no exception, some of which are shrinking at a frightening rate. Ours, for instance, came together with the nearest outcrop glacier as recently as the Second World War, but now the two are separated by over a mile. It has also lost a great deal of volume in that time. Farther down Route 1 is the glacial lagoon of Jökulsárlón, which is the result of the melting Vatnajökull icecap. The lagoon features beautiful, massive icebergs, resting on their final stop before heading out to sea, but it didn’t exist as recently as 80 years ago. Now, the lagoon is massive, and the great glacier which used to extend all the way to the road, is barely visible in the distance. The volume of the lake has quadrupled since 1970, and it has recently become the deepest lake in Iceland. At this spot, Vatnajökull is receding 200-300 meters every year.

Climate change activists are often accused of being alarmist, and sometimes they are. However, when you glimpse the changes that are happening in a single lifetime first hand, it has a profound effect on your outlook. Jökulsárlón is both one of the most beautiful places I’ve been, and one of the saddest. Its splendor is intrinsically linked to its ultimate future demise.

So, with all of this beauty, and the knowledge that we needed to appreciate it while we can, we decided to set out on the ice. After looking at the prices for guided tours, Christine noted how we should have just bought our own pair of crampons. It was a joke, but a very bad idea nonetheless. As with many things in nature, the beautiful, even seemingly serene, can easily kill, and glaciers are no exception. In this month’s National Geographic, there is a long article about the most recent tragedy on Mt. Everest. This April, an enormous block of glacial ice calved and killed 16 experienced explorers and more experienced sherpas. Even outside of the extreme conditions that exist on Everest, the dangers posed by climbing on glaciers should not be overlooked, or taken lightly. Our guide told us about one tourist who set out on the same glacier a week before us. He lost his sunglasses down a crevasse, went down after them, and then they had to go down after him. The man was lucky, only sustaining a few small cuts and bruises, but his glasses were gone forever into the icy blue depths.

We also heard about a German couple last year who thought it would be a great idea to climb this very same glacier on their own. They were not so lucky; their car and tent were found near the glacier, but the couple had vanished. No other traces have been found, nor are they likely to be. The local authorities set out on a massive manhunt for the missing couple, but nary a trace was found. To fully appreciate nature, you have to admire its beauty, but respect its power. Glaciers are notoriously slow, and on a whole, a benefit to humanity, but they can kill all the same without the proper precautions and local knowledge. 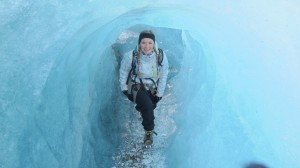 And our locals, members of the excellent and popular Icelandic Mountain Guides, were terrific. Friendly and jovial, like so many other Icelandic people we encountered, they showed us around various features on the glacier, stopping to point out caves, crevasses, and where the spaceship exploded in Interstellar. They also told us a few fun facts about Iceland, including their interesting theories on why Icelandic people are strong and beautiful, how an Icelandic volcano fueled the French Revolution, and how their distant cousins discovered America before Columbus–or as our guide called him “This Christopher Cocopuffs guy.” (I must take a brief moment to address the fact that while the Vikings were the first Europeans to find the North American continent, I still take issue with the term “Discovering” when there were already millions of inhabitants, and several advanced civilizations living there.)

The experience was quite different from what we experienced in Argentina, in part due to the different seasons. We visited Patagonia at the beginning of their summer, whereas this was the beginning of winter in Iceland. As a result, Svinafelljökull didn’t quite have the same magnificent, deep blue tones, and the consistency of the ice was much harder, clearer, and had far fewer embedded rocks, gravel, and sand. At times in Argentina, we were walking on more dirt than ice, and the ice had a softer, snowy feeling underfoot, as opposed to the much smoother, harder ice found in Iceland.

All told, we were on the ice about two hours, and it was one of the many highlights of the trip. The sun treated us with a rare visit, and the wind–for perhaps the only time on the trip–was still. Although 89% of Iceland is not ice, after a few days driving around and walking on glaciers, it certainly didn’t feel that way. Seeing glaciers up close is a rare and memorable experience, and if more people followed suit, I suspect we’d be taking global warming much more seriously. I desperately hope that I won’t be telling my grandchildren about glaciers in the same way I will talk about dial-up Internet, and phone books. 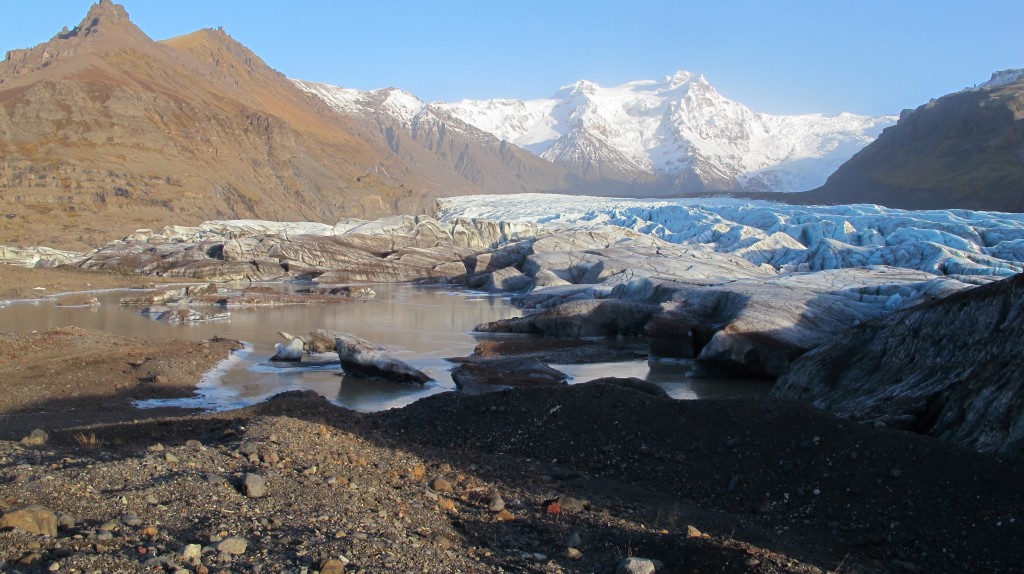