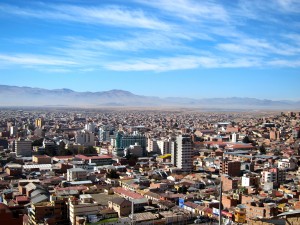 Perhaps it is harsh to call a city of a quarter of a million people “Nowhere” straight from the outset, I know I would be duly offended if and when someone refers to my own similarly sized town of Knoxville as “Nowhere.” But that’s certainly how we saw Oruro, Bolivia when we arrived late one evening after four long days on the road after touring the famous Salar de Uyuni (Uyuni Salt Flats).

Like Punta Arenas in my previous “Lessons from Nowhere” post, we had no intention of visiting Oruro during our several weeks in Bolivia. Again, South America had other plans, and we were unceremoniously dropped off there with no ideas where to stay, what to do, or where to eat.

Under different circumstances, Oruro could have been an interesting place to visit. The city, at its core, is a mining town, famous for its silver and copper deposits. Tours are available to visit now-defunct mines, though I’m not sure how much I’d really like to crawl into a cramped mine in Bolivia (or elsewhere, for that matter).

It hardly made a difference whether we wanted to be there or not, or, giving the inevitability of our stay in Oruro. Whether we wanted to see the sights or not, we we stuck in Oruro for two nights, and one full day because the Bolivian government had mandated that everything, and I mean everything, had to be shut down for the national census.

Most countries have a census, and generally they take place at somewhat regular intervals. In the U.S. it’s largely done by mail and a few annoying people knocking on doors every 10 years (and yes, I was one of those annoying people during the summer of 2010, but that’s a story for another day). You could probably forgive us for not realizing it was a census year in Bolivia. For one, who checks such things before departure? Secondly, the previous Bolivian censuses came about with no rhyme or reason whatsoever. The first census was in 1831, then more or less every ten years in 1835, 1845, and 1854. The government would only count its people three more times in the next 100 years, in 1882, in 1900, and in 1950. The census then took a 26-year break, returning in 1976, and a 16-year break after that until 1992. Since then, they’ve almost established some sort of regularity–certainly by South American standards–with censuses in 2001 and 2012.

Unlike the rather laid-back, “Fill this out in the next few months or we might have to knock on your door” approach of the U.S. Government, Bolivia instead mandated the sequestration for all its residents for one full day while workers run around with clipboards, duly counting everyone.

It turns out travelers also count as “everyone,” so instead of being able to book a bus from Uyuni to La Paz, we could only go as far as Oruro before the national curfew took effect. We must have been a funny sight, ten gringos–all of us coming from the Salt Flat tours–getting off the bus in an unexpected city, and looking for a hotel before everything in the country shutdown. We found a decent hotel, at least by Bolivian standards, and piled in. 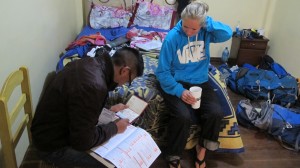 Christine and the census worker.

The hotel proprietor smartly put us all on the same floor, as we would spend most of the following day gathered in the hall playing card games, chatting, and waiting. There was little else to do, as we were literally locked in.

Christine and I knew some of the other travelers, two of them were from our tour, and the others were varying degrees of nice or, barring that, at least nondescript. The two notable exceptions were Bas, an affable Dutchman who would also join us on the Death Road, and Sally*, one of the weirdest and most annoying people I’ve ever met. Sally, a Canadian, carried with her a lifeline of crackers and peanut butter, and refused to eat the local food–not that eating the local food was an option with us all locked up for the day. When the hotel owner kindly cooked us some rice and eggs, Wendy refused to eat. It just meant more for the rest of us, and we gladly overpaid for this basic meal.

Eventually, the census workers came around, and to our surprise, they wanted us each to fill out a questionnaire. That’s right, somewhere in Bolivia, there’s a form with my personal information tucked deep inside a drawer. One by one we answered their questions until they packed up and moved on to the next location.

With our unexpected duty to the Bolivian government fulfilled, we were now free to leave the hotel, though a stroll through the uneven streets past countless closed shops proved there was nothing much to do. Everything remained closed for the remained of the day. It was unnerving walking through the city with hardly a soul in sight, as if we had been accidentally caught up in a post-apocalyptic movie. As the sun began to set, and more Bolivians gained their freedom of mobility, more people filled the streets, though the shops remained eerily closed.

We wandered the streets, hoping to find at least one place where we could buy some food, when we came across a fried chicken place with its metal shutters drawn down to about knee-level. We heard some noise behind the barrier, and we crouched down to see if they were setting up to open any time soon. They were not setting up, they were fully open, and the place was packed with hungry locals chowing down on some fried chicken, rice, and french fries. The shutters were merely drawn to keep up appearances, and to be quickly closed in case any officer caught wind of this activity.

One by one, we ducked below the metal barrier, and ordered food for take-away. Well, everyone except Sally, for whom fried chicken and rice was too adventurous. The rest of us greedily dug into our meals back at the hotel, as it was the first honest meal in over 24-hours, and the previous four days before that on the tour were not anything particularly special, either.

The travel restrictions would lift early the next morning, and most of us continued on to La Paz. We ended our second and last night in Oruro all crowded into one bed, watching Allie and Noah do their thing in The Notebook on Christine’s small laptop. A strange way to end our stay, certainly, but nothing was usual about our stay there.

Our mandatory rest in Oruro was not as fun, spectacular, or noteworthy as anything else we saw in Bolivia before or after it, but it is a story worth telling nonetheless. And sometimes tales like this one are the best to tell; it is impossible to talk about hiking Isla del Sol on Lake Titicaca, or biking the Death Road, or touring the Salar de Uyuni without bragging on some level, but I never have to worry about creating jealousy with stories about getting stuck nowhere. There will always be times when man plans and the travel gods laugh, and the only thing left to do is to laugh with them.

For those interested in such matters: The population of Bolivia according to the 2012 census was 10,027,254. No word on whether Christine and I are included in that tally.

*Not her real name.