Of Borders and Bananas 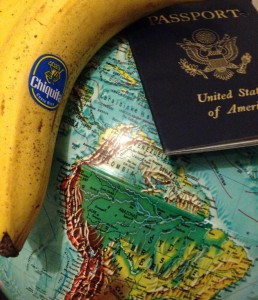 Border crossings are at best tedious and at worst terrifying. More often than not they’re quite boring, waiting in long lines to have some border guard give your passport the briefest of glances before stamping or not stamping it on his or her discretion.

Ironically, some of the most stressful crossings have come when returning to my native country, the United States. These Homeland Security officers, I believe hired solely based on their top marks in their Prick Aptitude Test(™), ask questions with a special flair of combining meaningless queries with accusatory tones.

“Been traveling for three months?!” “So you’re currently unemployed?!” “How did you get paid in your last job?!” “Your passport says you’re from Wisconsin. Why aren’t you wearing a large foam Cheesehead?!” And so on. They’re probably just bored, having caught precisely zero terrorists in airports since the post 9/11 inception of this large government agency.

If their mission is to scare the shit out of jet-lagged American travelers and not to catch terrorists, they are highly successful. Their manner of intimidation is reminiscent of a police officer following an innocent driver. “Oh no, did I forget to renew my license? Is my left-turn indicator working? I hope he doesn’t pull me over for going 36 in a 35!”

Of the non-U.S. but still terrifying variety, the one that sticks out most in my mind is the bus trip across the Argentinian-Chilean border in Southern Patagonia.

The crossing was bound to create at least a slight fuss. This was my first attempt at using my temporary passport, as I had been relieved of my real one in the fashionable San Telmo district of Buenos Aires. I hoped my old passport was enjoying a fine Argentinian red and a tango lesson with its new owner. Stolen along with the passport was the expensive entry visa, proving that I was allowed to be in the country in the first place. 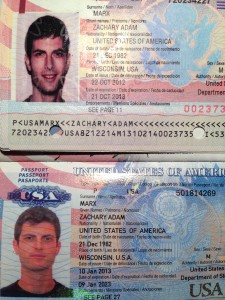 Can you spot the fake?

Now, I must take a moment to explain that my temporary passport was put together in a few hours at the U.S. Embassy in the Argentinian capital. While it looks semi-official on the outside, the inside looks laughably fake. The photo was taken by a man waiting outside the Embassy in an old, unmarked white van, armed with nothing but a white bed sheet, an antiquated digital camera, and a printer in similar condition. I paid the man $10 (and yes, he was adamant about collecting in U.S. currency only), then he hung the sheet on a nearby tree, asking me to hold down the corners to make a flat background while I smiled for the camera. The pictures, surprisingly, didn’t look half-bad. However, when they were transposed into the temporary passport, my face was stretched and distorted, and the photo didn’t align correctly with the rest of the document. My relevant information was obviously printed on a sticker and stuck haphazardly into the inside cover, and the colors and holograms were just off. I left the embassy wondering how in the hell this passport would manage to work even once, let alone at every single border crossing between here and the States.

At the Argentinian checkpoint, the officers dutifully checked my passport, and then told me in Spanish that I was under arrest, complete with a hand gesture of wrists handcuffed together. He said it with a smile, so I returned this ambiguously threatening statement with a wry smile of my own, hoping that it was indeed a joke. The officer instantly started cracking up, to my enormous relief, pausing only to tell his amigo about this great practical joke he played on this gringo He then stamped my temporary passport with a smile, and we moved on about 50 meters down the road to the Chilean side of the border.

Things went much more smoothly until we reached the baggage check. An officer singled out our bags for further inspection when he spotted something nefarious on X-ray. What could it possibly be? Bananas. He found bananas. Clearly we hadn’t read our Lonely Planet thoroughly enough, as bringing fruits and vegetables between countries is illegal.

The officer put on thick, blue latex gloves, ceremoniously dumped the offending fruit into a trash can. With a flourish, he picked up a spray bottle, complete with cartoon-esque skull and crossbones, clearly identifying this as some variety of poison, and doused the bananas thoroughly. It was quite the display of force for food largely considered to be the missionary position of the fruit world.

He let us off with a warning, and told us not to do it again. It was quite kind of him not to fine us, or create any other problems, although the bananas must have thought the officer was some kind of fascist. Sure, it was helpful that we had a bus waiting for us, and it’s never a good idea to hold up that many people over a small matter, but he could have.

There are lessons here, although I’m not sure how many are universally applicable. Of course, it’s important to check the regulations before you get to the border, because even the easily overlooked can become an international incident in the eyes of the overzealous–or bored–customs agent. As I said, we were lucky to avoid a fine or worse, but perhaps there’s another important lesson in human empathy; just because a person in a position of authority can be a dick, it doesn’t mean he will be one. By no means should you count on human kindness, but you can’t rule out the possibility outright, and encouraging surprises do exist.

My temporary passport was never an issue throughout South America. I’m guessing they’ve all seen an unusually high percentage of temporary passports on that continent. Naturally, when I returned home an overzealous Homeland Security agent jumped on the opportunity to pull me out of line for special questioning.

“Where did you get this passport?!” “Why was the original stolen?!” “Why were you staying in a hostel?!” “Why did you just take the stairs instead of the escalator?!” “Who’s your daddy?!”