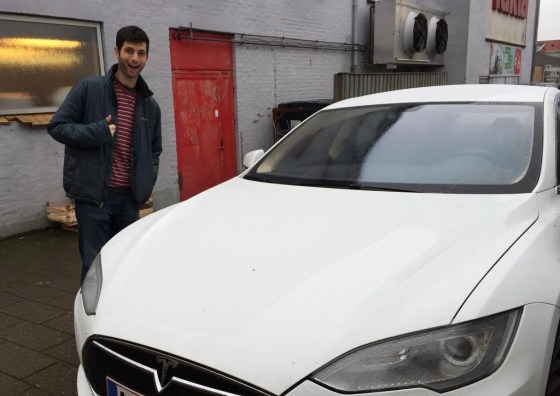 Before I even managed to utter my first syllable of appreciation I was cut short, “You can’t say anything about his Tesla. He’s our competitor.”

Christine and I were on our way into the her parents’ restaurant, Glashuset, and a shiny new white Tesla Model S was parked in the alleyway, dutifully plugged into the nearest power outlet. The car, or as The Oatmeal’s Matthew Inman puts it, the “Intergalactic Spaceboat of Light and Wonder,” belonged to Morten, the owner of the adjacent restaurant.

Naturally, Christine’s preemptive strike did little to stop me from blabbing about how incredible it is. And it is an impressive, potentially revolutionary, car.

The newest model broke the Consumer Reports rating system, scoring a 103 out of 100. It also has the highest safety rating of any car, ever, scoring 5.4 out 5 stars. And it is now the best selling luxury sedan, outpacing BMW’s 7-series.

Unlike other electric vehicles, it has a much better range, between 225-270 miles, depending on the make. It’s not quite up there with conventional internal combustion engines, but it is getting close. Tesla has also gone about setting up a network of superchargers between major cities around the globe, allowing drivers to recharge their batteries quickly, and allowing for longer road trips.

I could go on about the fantastic innovative breakthroughs from Tesla, and I did–for about 10 pages–in my final paper for my Sustainability and Natural Resources class. But none of this got me closer to sitting in one.

No, that was arranged by Christine’s parents, who simply asked their neighbor for a spin in the vehicle. I was merely hoping to experience it from the passenger side, I never expected to actually sit behind the wheel.

Morten was excited to show me around, and I learned that he actually sold Teslas on the side. His salesmanship showed, as he was eager to point out all the benefits of having such a fantastic car.

The first thing you notice about a Tesla is the handles. Namely, they’re not there. Or rather, the handles aren’t there when they’re not needed. As Morten approached the car, the handles popped out from the door; when parked or in motion, the handles lay flat against the exterior of the car. Nice touch, but not really revolutionary.

However, the car has a different feel as soon as you sit inside. The entire dashboard and console looks and acts like a giant iPad. Everything from navigation to settings is available at a touch of a button, and the car is always online. Additionally, the car downloads the newest updates automatically, straight from Tesla, whenever they’re available. Naturally, I asked if he had downloaded the highly-publicized self-driving mechanism, but Morten lamented that the car was a scant three months too old to receive this update.

The car is eerily silent. We are so predisposed to hearing the roar of an engine, particularly for a car boasting an impressive 417 horsepower (one model has over 530 horsepower, with a 0-60 speed of 2.8 seconds). I couldn’t really say the silence was shocking, as I knew it would be on an intellectual level, but my senses expected to hear something all the same. Within a few moments, my senses had adjusted to the new, silent world of electric vehicles and I could sit back and enjoy the ride as Morten went on about all the impressive features.

As I just alluded to, the car is fast. Like, really fast. Although Morten doesn’t have the fastest model (with its appropriately named “ludicrous” mode), his version is plenty fast. On one stretch of road, he opened it up and reached 100 km/hour (~62 mph) in what seemed like an instant. The acceleration wasn’t merely impressive, it was extreme. Violent, even. He then promised to take us out on the highway on another occasion where he said, “We’ll reach 200 before the end of the ramp.” At one point we blew past a pedestrian at speeds well above the speed limit. The Tesla was so quiet that the man and his dog didn’t even look up.

On the way back I got behind the wheel, and mostly stuck to the speed limit within the city (though truth be told, I did briefly put my foot down to feel the enormous power behind the vehicle). One major difference I noticed is that the car automatically breaks when I took my foot off the accelerator. This is to save energy and to use the breaking system to recharge the battery, but it took a little getting used to.

The ride was over far too fast, but I really appreciated the experience. It’s a fantastic car, one that blogger Tim Urban compared to the iPhone in its transformative potential:

When the real change arrives, you know you’re seeing it. It’s a distinct and exhilarating feeling when you witness a disrupting innovator ram its way through the canopy. I had that feeling when I watched Steve Jobs introduce the iPhone in 2007. Before that moment, I had assumed that the ubiquitous Blackberrys and Nokias and Razors of the world were cutting-edge technology—but that keynote was an epiphany about how buried in the past those phones actually were. You don’t realize your Blackberry sucks until the iPhone exists.

He’s right. It might have felt and looked like a car, but it was fundamentally different. It is smart, innovative, and it’s desperately needed.

I pulled the Tesla into a tight parking spot in the back alley with ease, assisted by sensors all over the car. With the car successfully parked, Morten plugged it into an outlet, easy as can be.