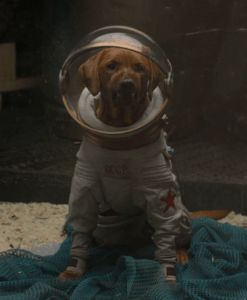 Man and dog have been inseparable since long before recorded history. The domestication of the dog from its wolf common ancestor is a hallmark of human history, and as we have found each other so useful over the years, it begs the question, “Did man create dogs, or did dogs create man?” Obviously I don’t mean that dogs created the genetic “man”–humans have had much more genetic influence on dogs than the other way around–but maybe they gave us just that little bit extra to lead us down a path to creating agriculture and civilization.

Dogs at the very least predate civilization, with most experts agreeing they were domesticated by 16,000 years ago at the latest, and possibly as early as 32,000 years ago. However, the aforementioned question isn’t the one that this post is about.

Instead, I’d like to explore why dogs are almost never included in the space-faring missions in science fiction. This might seem like a curious question to address, but I think it’s an important one. As we’ve seen in so many other countless examples, science fiction has a way of infiltrating the public consciousness, and eventually becoming science fact.

Dogs have always been our faithful companions to every global frontier, why wouldn’t they accompany us to the final frontier?

Not all furry companions have been left behind on the Earth; there are loads of cats. Ripley from Alien had a cat. Data from Star Trek: Next Generation had a cat. Do these interstellar ships have rat problems? The former clearly had pest-control problems. Way to make yourself useful, cat.

The only real example I’ve seen of a dog in space is from Star Trek: Enterprise, Captain Archer’s beagle, Porthos, who apparently falls victim to a transporter mishap as mentioned by Scotty in the Star Trek reboot.

So why not dogs? For one, dogs actually preceded man into space. The first living creature shot into space was a dog (give or take a few bacterium that hitched a ride on Sputnik). The Russians shot a few dogs into space (some were luckier at the “returning from space” part than others), and that was somehow the end of the houndstronauts.

For all of the obvious complications that come from shooting a dog into space to live with astronauts in a micro-gravity environment, the fact that dogs have been grounded since those heady, early days of experimental spaceflight makes sense. However, for longer missions (e.g. colonizing Mars), having a dog along for the trip makes all the sense in the world. Or rather, all the sense in multiple worlds.

I don’t necessarily want to point out the obvious, but dogs are known as “Man’s Best Friend” for a reason. Dogs have been co-evolving with humans for tens of thousands of years, give or take a few wags of the tail. Dogs are genetically distinctive from their wolf brethren, and possess unique behavioral traits in several key ways. Dogs are much more attuned to human emotions. Dogs make eye contact with humans. Dogs will follow human commands and gestures. Dogs are just as comfortable with humans as they are with other dogs. Wolves, no matter how tame, will never do these things. Neither will cats.

But wait! There’s more! No matter where we’ve been as a species, dogs have proven useful companions. They herd and protect our flocks. The help us hunt. They protect our families. Now, they’re capable of detecting everything from bombs to cancer (in some cases better than our best equipment), giving sight or hearing to the blind or deaf, and helping those with all sorts of physical or psychological ailments. Plus, dogs are just all around good company.

So, what’s my point? It seems to me that dogs would be pretty useful on board long-duration spacecraft. Dogs could be trained to sense stress or anxiety in the astronauts, and step in for a quick belly rub. They could be trained to detect leaks, or noxious chemicals, or any number of things. Moreover, they could just be good company for people trapped inside a confined metal tube for long periods of time. When social problems inevitably occur between the humans, the dog can be there for everyone.

Throughout history, dogs have proven a highly adaptable, highly useful companion regardless of where we go, and regardless of new technology. Dogs in space is not just something that can, or even should happen, but the only logical progression for humanity. Wherever we go in the cosmos, we will take our humanity–with all the brilliance and follies that comes with it–and we would not be who we are as a species without dogs following us every step along the way.