Despite all of the complaints I could levy against the South and Tennessee–and there are many–I still consider it my home, and I still miss it dearly. Sure, the people are conservative, religious, and often narrow-minded, but they are also outgoing, good-humored, and passionate. The weather is nice most of the year, I have strong roots there, and I never got sick of seeing my beloved Smoky Mountains in the distance. But, after 12 years in Knoxville (give or take a year in Japan), I felt that it was time to move on. 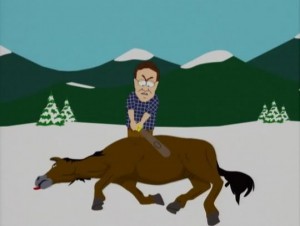 Pictured: Me talking about my past mistakes.

All signs seemed to be pointing North. I had been accepted into grad school at UW-Milwaukee, I had an internship lined up with the World Trade Center Wisconsin, and I felt a strong need to be there for my family, who was rapidly falling apart. The move seemed good on paper. I’m not going to rehash my mistakes and struggles during my two years in Milwaukee (visual on right). Instead, I’d like to talk about how much more difficult my life would have been without couchsurfing.

I’ve already talked at length about how Courtney made me feel welcome in the city, and while she was my first point of contact, other Milwaukee couchsurfers also stepped in and helped me in immeasurable ways for which I am eternally grateful. Through the Milwaukee group, I learned of another member who would be moving to Milwaukee at the same time, also to start grad school.

This surfer, Chris, was rather large and decidedly gay, leading to the nickname BGC or Big Gay Chris. After many e-mails and messages exchanged, we agreed to become roommates in a flat in the Riverwest neighborhood. Seeing as he lived in Cincinnati, and would be on my way to Milwaukee, we decided to share a Uhaul. To put it simply, I don’t know if I would have had the financial wherewithal to move, had it not been for Chris.

Unfortunately, as helpful as Chris was in helping me get to Milwaukee, he was also responsible for putting a huge strain on my bank account. After only two months of living together, he moved out abruptly. Thankfully, I wasn’t on the hook for his half of the rent, but I now had to pay all the utilities, and it was approaching winter in Wisconsin.

Another couchsurfer, Nichole, tried to help. I met Nichole on my very first night in Milwaukee. We arrived to the city much later than anticipated, and I needed a place to sleep. On exceptionally short notice, Nichole came through in flying colors. Fast forward two months later, and she was trying to help me find a replacement roommate. In this regard, she succeeded. I had a new roommate, but still, no financial help. To this day, the roommate-who-shall-not-be-named owes me about $1100 in bills. Still, I am extremely grateful to Nichole for the effort; it’s certainly not her fault the roommate ended up being such a deadbeat. 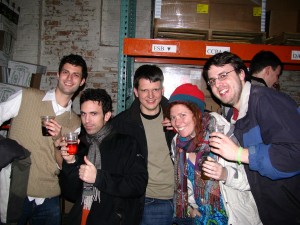 Lakefront Brewery: A friend to Couchsurfers

Looking back at those early days in Wisconsin, I’m not sure how I would have made it without help from my fellow surfers. They gave so much, often without me even asking. I struggled so much, and yet, I had a great group of friends and we had some great times.

From start to finish, the Milwaukee group represented almost all of my social life while I was there. We had a party during election night in 2008. We had countless movie nights over the two years. We played soccer together. We entered the 48 film festival. And we drank beer. A lot.