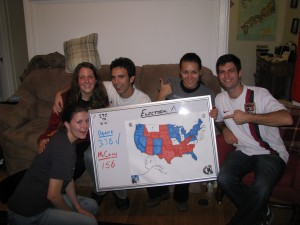 Left to Right: Some chick I can’t remember, Courtney, Nick, Milana, and Me.

Within a few scant months I felt at home around the Milwaukee group of couchsurfers, even if I was not completely at home in the city itself. We made regular outings to the Art Bar, located just two blocks from my apartment, and the likes of Courtney, Nichole, and Kerensa all took turns showing me around town.

I hadn’t yet hosted a couchsurfing event, but I had the perfect excuse to do so with the 2008 election. There was a palatable excitement–some of it deserved–surrounding the Democratic Presidential Nominee, Senator Obama. Additionally, the couchsurfing community is extremely liberal for the most part, so the party was a good fit. Polling remained tight throughout September and October, but by election night it seemed very likely that we would be electing America’s first black president.

I was hopeful for a large turnout, but even I was surprised by the amount of friendly faces showing up at my door. I had about 20 people show up to my old flat in Riverwest, and only half-a-dozen of whom I knew prior to that evening. It was a tough sell when also inviting my coworkers from the World Trade Center.

“How many people will be coming.”

“Do you know all of these couchsurfers?”

“Hardly any at all.”

Of the 20 or so that did show up, there was only one GOP supporter; he wore a sullen expression most of the night and it was obvious that he wouldn’t have been there had it not been for his liberal wife. His conservative views didn’t offend me nearly as much as when he referred to all of the South as a “wasteland.” When I reminded him that I was a proud Tennessean, he continued berating the South, insisting that it was somehow inferior because it didn’t have as many farms as the Midwest. (I swear this was his argument, that having mountains instead of farms made us “less developed” or something). He somehow failed to connect the fact that it was mostly conservative political philosophies that were responsible for the current state of the South, nor did he recognize the South’s electoral importance to the conservative branch of the Republican party.

For the rest of us, the night was an unmitigated success. Most arrived to the party late, and by 9 o’clock the election had already been more or less shored up by Obama. From that point on, it was just beer and shots when the election was finally called for president-elect Obama.

Throughout the night, I updated an electoral map of the U.S. with appropriate blue and red markers. For a former political science major, presidential elections are like Super Bowls, and I was definitely prepared. 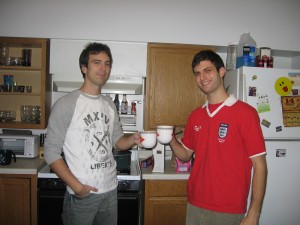 People often asked if we were brothers. I always replied, “Yes. He’s the Serbian one.”

Had it not been for this election party, I might have never met my Serbian friends Nick and Milana. This was a big day for them, as it was their first election as U.S. citizens. Nick had fled Serbia in the late 90s as a political refugee. From that point forward, we became nearly inseparable friends within the local couchsurfing community. Everyone, myself included, assumed that he and Milana were “an item” but that was never the case. Not only was it assumed, most people wouldn’t even believe Nick throughout his constant denials of couple-hood. I would probably be included in that latter category as well. It’s a shame, really, because I would have definitely been interested in seeing Milana myself, were it not for fear of hurting Nick’s feelings. I still don’t know if I believe him, come to think of it.

Nick and I eventually moved in together in a great place near Brady Street. He remains a great friend and I truly hope he keeps to his word and comes to Korea this summer. Three and a half years after this night, I still remember it very fondly. It was one of the best couchsurfing events that I have been a part of, and not just because I hosted it. This event, more than anything else, really solidified my place among the couchsurfing regulars in Milwaukee.

← Leaving Knoxvegas
It Keeps Getting Better →