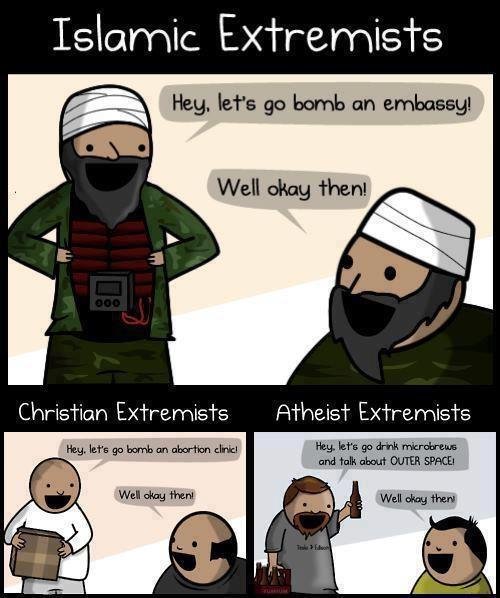 On Wednesday, twelve French citizens lost their lives at the hands Muslim extremists. It was clearly an act of terror, intended to stop future satire or criticism of Muslims or the Islamic faith. These are the facts, but as a society, we would do well to focus more on the “extremist” part than the “Muslim” part.

Does the Muslim faith have passages which lend themselves to horrific violence? Absolutely, but so does the Judeo-Christian tradition. The latter had to grow out of it (for the most part) through centuries of moderation, and we need to encourage a similar transformation in Islam.

As an atheist, I’d certainly prefer no gods to one, but I’m not so foolish as to not see the benefits of moderation in belief. After all, what is a “Moderate?” It’s simply a code word we use for those who prefer to gently ignore the more extreme or inconvenient parts of their religious doctrine. And moderation is like a gateway drug to skepticism and atheism. If you’re willing to ignore certain dogmatic laws for sake of living your life, what’s to stop you from ignoring a few more? Or all of them?

We don’t generally go around killing neighbors for having affairs or working on the Sabbath these days. And I know a lot of Jews who will eat the hell out of a ham sandwich. These are good things. Above all else, our freedoms in liberal democracies derive from being able to live our lives as we see fit, so long as we are not interfering with the rights of others.

This is an ideological fight we cannot afford to lose. Certain rights, freedom of expression being paramount among them, are nonnegotiable and need to treated as such. As I said in my last piece on “The Interview,” terrorism is committed by extremists who wish to bend the general population to their will through fear. It takes two to terror: those committing or threatening violence, and those who allow that threat to change their lives.There will always be those who possess the desire and ability to take lives for religious or political purposes, but we cannot surrender our core values in order to gain the illusion of safety. And it is an illusion.

Terrorists will not end this fight, no matter how much accommodation we are willing to cede. I’d just as soon cede no ground at all. If we are unwilling to stop eating ham sandwiches for the sake of “cultural sensitivity” then we should be unwilling to give up satire.

In keeping with my poker analogy from my previous piece, the best way to combat terrorism is to figure out what they want and do the opposite. These Islamists want us to never criticize their faith again. And they want our own religious or right-wing radicals to show their asses by protesting Islam and defacing mosques. They want to shut up the liberals and moderates, and make the conservatives look like racists. They want their own moderates to feel unwelcome in their Western homes, and become radicalized.

They need more radicals to continue the assault on liberal, democratic values. We need moderates to uphold them.

If we are to prevail in this ideological battle, we need to do much better.

First of all, we need to treat Islam like any other religion, and that includes satirizing, criticizing, and even offending. This is the price of admission to a liberal democracy: if we disagree with your world views, we get to say so. It is how we threw off the shackles of our own religious oppression, and it is vitally important in the perpetual fight to keep the extremists on the fringe.

Conversely, we must ensure that Muslims feel safe worshiping within our borders, so long as it is within the bounds of our civil laws. All other people of faith must adhere to these criteria, and so too must Muslims if they want to practice religion within the confines of a non-majority Muslim country. We must not treat any religion with kid gloves, but we must be fair and equal.

We must be careful in aiming our criticisms at Muslim fanatics (and fanatics of all stripes), not just at all Muslims. When we criticize Islam, we must make sure those criticisms are said without bigotry. We are well justified to be opposed to certain ideas, not the people who hold them; or to borrow a phrase from Christianity, “Hate the sin, not the sinner.” We must stand up as vocally for the rights of moderate Muslims living in our societies as we do against the extremists and their destructive philosophies. We must be as strong in our support of freedom of religion as we are for our freedom of speech.

This is also a call to action for sympathetic liberals and moderates to drown out the hate and fear mongering coming from the right. In recent weeks we’ve seen wonderful demonstrations such as “Love bombing” a mosque in Sweden and the #IllRideWithYou campaign in Australia. Tactics such as these need to be replicated as much as possible. Essentially, we need to show that we are more opposed to radical religious behavior than to any one specific flavor of religion.

There are only so many terrorists you can realistically kill, so the best offense is a good defense against creating future radicals. Making moderate Muslims feel unwanted and uncomfortable in their own countries, on the other hand, might send a few away, but they will come back with vengeance on their mind for their real or perceived slights.

I saw a humorous post on Facebook proudly proclaiming that Catholics didn’t beheaded a single person last year. Well isn’t that grand? The statement would have not been possible so long ago, but those religious radicals were eventually shouted down by the moderates. Now, Christians only occasionally kill over their beliefs, but mostly just make asses of themselves on street corners.

As I said, no religion would be preferable to some religion, but I also recognize the possible transformative power of moderates deriding fundamentalists, thus allowing us to worship and speak freely in a society without fear.

← Why I Always Travel with Cards
This Island Earth →