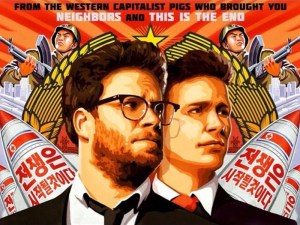 I love poker. It’s a game that reveals the inner-workings of the human mind better than any, and the small battles that take place on the felt translate directly into the real world. Legendary poker psychologist Mike Caro says the most important thing to do at the table is to figure out what your opponent wants, and do exactly the opposite. This rule could just as easily apply to terrorists and extremists, and certainly to the most recent story of Sony Pictures caving to North Korean threats over the Seth Rogan/James Franco comedy “The Interview.”

This move has justifiably created a strong reaction, even from those who were unlikely to see the movie. Nothing less than the freedom of speech and expression is under attack, and what’s worse, this self-censorship has ensured that North Korea has won this round. The decision is baffling both financially–it’s likely this movie would have made over $100 million–and ethically.

Aside from the questions over self-censorship and caving to terrorist demands, this is an issue that bothers me on a personal level. Having lived on the Korean Peninsula for two and a half years, the plight of the Korean people is near and dear to my heart. I watched North Korea plunged into darkness on a nightly basis from my home just across the DMZ in Paju. The time spent so close to the edge of civilization continues to have a profound impact on me, and I think it’s all the more necessary to create awareness of life in the North.

While I doubt that “The Interview” would have tackled the most important and pressing issues with North Korea–the starving populace, the multi-generational prison camps, the complete absence of electricity, the kidnappings of Japanese and South Korean citizens, breaking their ceasefire with the South at irregular intervals, etc–it would have still focused a much-needed light on a country that has largely been ignored or forgotten by the Western media. The North Korean regime is one of the worst on the planet, and yet the world turns a blind eye.

Sure, it’s just a comedy, but the ability to laugh is what separates us from the extremists. A religious moderate, for example, can laugh at or at least ignore a good joke at their expense. A fundamentalist cannot. It might not seem like it, but comedy is arguably the most important aspect of free speech. Jon Stewart knows it. North Korea knows it. Why doesn’t Sony? By mocking the powerful, you take away the fear which is necessary for them to remain in control. By laughing at them, you strip them of their defense, baring their ridiculous antics for the world to see. It’s why extremist governments, and extremist religions push so hard back at any dissent, because simple jokes can erode their power. They know their system is built on a house of cards, and that the smallest disturbance can bring it all down. It’s bad enough that North Korea rules over a cold, starving, fearful population with an iron fist, but now we’re letting them dictate our media? This is shameful.

The way Sony reacted is exactly what North Korea wanted. Mike Caro would be appalled. When you find yourself bullied at a poker table, the other players are only emboldened to continue with their successful strategy. The same thing applies here. This is why we don’t negotiate with terrorists, because it only ensures that they will try the same tactics to get what they want in the future. It is the proverbial giving a toy to a child who is throwing a tantrum in the shop; you’re only asking for more of the same in the future.

Sony shouldn’t be pulling the movie. They should be giving DVD copies out for free at the permeable North Korean-Chinese border. They should be broadcasting it by television waves, so the few elites in Pyongyang with electricity can tune in and see it. They should release it, and donate a percentage of their profits to help North Korean refuges escape that god-forsaken country. Don’t fold, raise.

My hope is that Sony reverses it’s decision and uses all this free publicity to make hundreds of millions at North Korea’s expense. If not, we’ve given away a vital right, and given it away cheaply.

← Lessons from Nowhere: Of Borders and Bananas
Why I Always Travel with Cards →

1 comment for ““The Interview”: How to Lose at Poker to Terrorists”