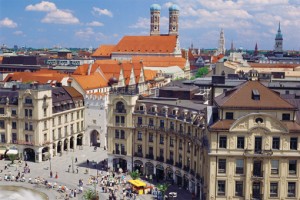 I’ve been in Germany for three months now, and in that time I’ve remained fairly silent on the issue. My silence has not been due to a lack of compelling stories, but rather (I think) from a desire to get used to my new life. When I arrived, it marked my fourth continent in just over six months; I wasn’t so much experiencing culture shock, I was experiencing culture shell shock.

In my two previous stints abroad–Japan and Korea, respectively–I was eager to write about every new experience and cultural difference. Certainly, Germany is not as “exotic” to my Western sensibilities, but in no way does that make the culture shock any less severe.

Unlike my last two arrivals into my new home land, I wasn’t greeted by my employer (or anyone for that matter). Instead, I pushed my overburdened cart with my dog cage (dog included), large duffel bag, and a laptop shoulder bag out of customs and to the exit. I stepped out into the cold, German morning, with temperatures near freezing. Back in Knoxville, people were already enjoying sunny, tee-shirt weather. I steered the cart to a small patch of grass near a line of taxis, took Sydney out of the cage, let her do her business, tied her up to a pole with some water and food–neither of which interested her at that very moment–and quickly went about dismantling her travel crate.

After a few minutes, and several curious glances from passing travelers, I hailed a taxi and asked him to take us to the hostel where Christine was staying. We had arranged to move into our apartment that night, after she got off work. In the meantime, she assured me that I could keep my stuff at the hostel, and we could rendezvous there in the evening.

The plan was working perfectly, until I arrived in the hostel lobby with all my stuff and my dog, and they told me that I absolutely could not store my stuff there, it was for paying guests only, and we don’t care who your girlfriend is. I asked if I could be a paying customer for the day, and was once again rebuffed. Reluctantly, I dragged my stuff out onto the cold street, took a look at my dog, and for a tense few moments, I really wondered what I was going to do until Christine showed up. Thankfully, the hostel manager popped her head out the door, saw my plight (but more importantly my dog), and offered up one of her many storage lockers. She then lectured me about our stupid little plan, and as soon as my belongings were safe and secure, I took Sydney and got the hell out of there, mostly out of embarrassment.

I figured that both Sydney and I could use a good walk after the long flight. Almost immediately, I noticed something horribly wrong with my dog, namely a massive, flattened shit  that had matted into her thick fur under her stubby tail. My guess is that she had been unnerved by the flight, and taxi ride, and being left with some stranger while I put away her crate, and at some point just couldn’t hold it in any longer, but she couldn’t go anywhere to do her business so…yeah. We made our way into a public pay toilet in Munich’s central station. We crowded into a small stall, and it was a long, disgusting process, but I finally managed to get a presentable and significantly less smelly dog out of the ordeal.

After a thorough hand washing, we stopped by the tourist office in the station, got a map of the city, and we were pointed in the direction of English Garden, one of the largest inner city parks in the world. Indeed, the park was massive and beautiful, even as the snow flurries whipped around my head. We were out for most of the day, and only returned to the hostel shortly before Christine arrived.

When she walked in the door and saw me, I saw a conflicted look cross her face. She rushed over and hugged me, and then shouted, “Why didn’t you email me to let me know you were here! I was worried all day!” My reply was something along the lines of, “Er…I…well…I was out.” I tried to explain my long, weird day without much in the way of Internet access, but in the end, we had more pressing matters: paying our landlord the deposit, and getting to the apartment. We got online, and with some effort managed to get the transfer of funds confirmed, and then piled into a taxi.

The ride was crowded. Sydney had to sit on my lap. I was very thankful I had cleaned her up earlier in the day. Our landlord greeted us at the door, and even helped carry some of the luggage up the three flights of stairs, and set out a bowl of water for Sydney. We did a quick inspection of the apartment, signed the lease, and then we were finally alone in our own place. Our German life together could finally begin.