To the strange, certainly unemployed, possibly homeless, gruff-looking German gentleman with the mullet and handlebar mustache who is always seen walking an impossibly small Yorkshire Terrier: 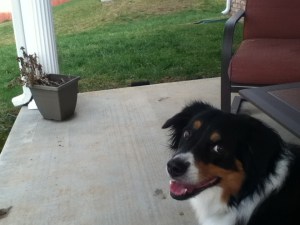 We have not been formally introduced, so please allow me to introduce myself on the Interwebs (though, from our handful of brief interactions, I am nearly positive you speak not a word of English). I am the American you see on a nearly daily basis walking his very energetic Australian Shepherd dog. The closest we’ve come to meeting is when my dog strays too close to your violently aggressive rat-sized dog, and a series of high-pitched noises–those resembling, but not quite replicating the barks of a normal-sized dog–emanate from your direction. In turn, my dog tilts her head at the curiously worked-up dog, and slowly backs away with the sad realization that there will be no crotch sniffing to be had on this particular encounter.

Perhaps I rushed to judgement to consider your employment status a foregone conclusion, but I am merely using the best available evidence. For I too am unemployed, and in turn, I allow a rather sizable portion of my day to be devoted to dog walking. However, you are either a far better dog owner than I, or lack other daily personal entertainment or activities, because I almost always see you on my walks.

Standing alone, this fact would not mean much, but it is rare for me to walk Sydney at the same time every day. Some days our walks are in the morning, other times in the mid afternoon, and on other occasions still they come about in the early evening. Also complicating matters is the fact that I almost always take different routes around the neighborhood. It would make sense if we shared a common daily routine, but as it is, either you are stalking me, or you just happen to walk your dog approximately 14 hours a day. Nothing personal, but I do hope it is the latter.

I wonder how an individual such as yourself has come to own such a diminutive dog? This is a breed I would expect to be peeking out of the purse of a spoiled Korean girl in the Seoul metro, not attached to a leash being held by a German man who, by the looks of it, has beaten a murder rap, but only due to lack of admissible evidence and people willing to testify.

Anyway, I’ll probably see you around tomorrow, and if not tomorrow, certainly the next day.

← On Sportsmanship
From the Beginning →