Update: This post was originally published April 1, 2013. Today, June 26, 2015, The U.S. Supreme Court legalized same-sex marriage in all 50 states. This is a great day for humanity, not just same-sex couples. It is also a great for those of us who believe that morality needs to be justified with reason, and logic, and not by fiat from some ancient text. I’ve left the post unaltered, because the arguments are as valid today as when I wrote them.

I’ve spent a great deal of time and energy on this site bemoaning the general excess of irrational thought, superstition, and absurdity that takes place in the national dialogue. So, when I’ve seen just the opposite trend taking place, I should jump at the opportunity to celebrate progress.

Regardless of the upcoming Supreme Court decision, the fight for popular acceptance of same-sex marriage has already won, and it has done so by completely and utterly exposing the counterarguments for what they are: bigoted, nonsensical, and ideologically driven. The arguments against do nothing to address the gap in inequality, or to adequately explain the moral dilemma, and why such a dilemma, if one exists, is harmful to society.  There is still a long way to go for majority acceptance of marriage equality in a majority of states, but even many conservative commentators feel that this is a lost cause, and it’s more a matter of “when” than “if” when it comes to the issue. And opinion has been changing quickly, in the neighborhood of 1-2 percentage points per year over the last decade. 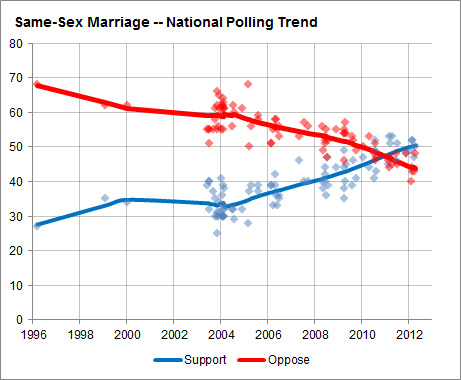 So why the sudden change in national opinion? There are many factors, including a generational gap and more widespread acceptance of homosexuals in society. However, I believe the biggest factor in driving society’s continued evolution on this issue is the lack of sound reasoning against gay marriage.

The most vocal opponents of marriage equality have come from the religious right, and they continue to provide the largest push-back against such measures. For many years simply opposing same-sex marriage on religious or moral grounds was enough to effectively shut-down debate. But the morals of religion and the morals society do not completely overlap, and when society’s morals evolve, religions are left with the choice of evolving or “moderating” their views to fit society’s, or to stand their ground and maintain an increasingly out-of-the-mainstream view on the matter. We have seen this trend in moral issues such as abortion; certain religions continue to take a stand against it, while society more or less considers the matter settled.

As much as religions would like to claim authority over our morals, the morals held within a liberal democracy are often far removed from those held within holy scriptures. As a society, we have moderated commandments having to do with blasphemy, adultery, and the Sabbath, as well as flat-out ignoring dietary laws. Additionally, we have elevated our own moral codes which the Bible is strangely quiet on, those concerning rape and slavery, to be of the utmost moral concerns. I’m not saying there aren’t large portions of the population that do not take offense to such matters as blasphemy and adultery, but these moral judgments are not reflected in our legal code*. We do not execute those who worship different gods (or no gods!) than our own, or those who mow their lawn on a Sunday (or Saturday, or Friday, depending on the religion in question). 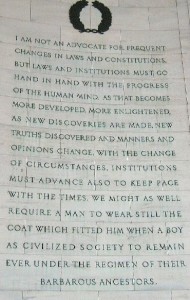 Quote from the Jefferson Memorial in Washington D.C.

In a democracy, we recognize that our individual, religious morals cannot take priority over the morals of others, and we cannot let our moral code infringe on the rights of other citizens. While we are free to hold ourselves to the morals codified within religious documents, we are not, by and large, required by law to do so. Instead, our morals are reflected in our civil, secular law, and as society’s morals evolve, so should those of the nation.

Other than just the simple moral argument, religious individuals have made claims about possible loss of religious freedom. They argue that if they are forced to marry gays within their churches, this would be an infringement on their rights. Indeed, if they were forced, it would be. But this is pure fantasy. Churches cannot be forced to marry any two people, and we have seen this time and time again when certain churches necessitate a conversion to their faith before they will marry two people. The state cannot force a church to adopt inter-faith marriage, and they will not force a church to adopt same-sex marriage. If anything, the only religious freedom being lost is by those churches that do allow same-sex marriages within their institutions, but cannot perform the service due to laws prohibiting the union.

I’ve also heard arguments against same-sex marriage from so-called “Libertarians.” I say “so-called libertarians” (SCLs for short) because I would think the government deciding who can get married would be something true libertarians would be against. These arguments go something like this, “The government shouldn’t have any hand in marriages at all, so I’m against the government allowing same-sex marriages on principle.” Personally, I would have much more sympathy for this argument if these SCLs would have taken such a strong stand before the issue of gay marriage came up. Even with the strictest of constitutional interpretations, SCLs would have to admit that the government exists to protect our rights. Ergo, they should be against any such limitations by the federal government. SCLs arguments are either insincere, letting their libertarian philosophies be corrupted by a previously existing bias against homosexuals, or misguided, not understanding that government intervention in this issue should only be to extend rights, not take them away. While many Americans do not like government intervention, very few have real qualms with the state issuing marriage licenses.

Personally, and on a brief side note, as a secularist and atheist, I’m glad that the government provides a way for us to get married. Some religious folk would argue that this is not “real” marriage, as it didn’t happen by the blessing of God, to which I would respond, “Then why are you getting so upset at the prospect, if this marriage isn’t ‘real?'”

There are other arguments against, and we’ve heard them all: “The sanctity of marriage” (whatever that means), “The slippery slope” (because marrying a dog is identical to marrying another person), and the procreation argument. Again, I don’t think these arguments hold any sway with the general population. The definition of marriage has been changing throughout human history, and now people are getting married, divorced, and remarried in ways that would have been considered completely immoral and scandalous in past generations. And while most marriages produce children (including one-quarter of gay couples), it has never been a prerequisite for straight couples, why should gay ones be held to a different standard?

I’ve spent about one thousand words now tearing down the anti-gay marriage arguments, but that is not enough to force the evolution of society’s morals. Like any minority struggling for rights, there needs to be arguments for same-sex marriage to sway enough of the majority to agree and act upon their opinions. For me, the strongest arguments in support of same-sex marriage comes from scientific studies, the 14th Amendment to the Constitution, and simply love. 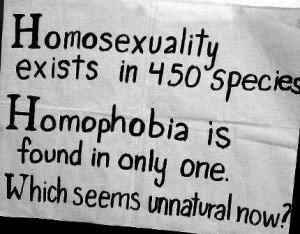 While there is still a great deal of conjecture over why a person is gay, the science on the issue is conclusive: homosexuality is not a choice. We know that an individual is born gay, and there has been greater cultural understanding of that fact. Further, there are countless of examples of homosexuality in the animal kingdom (just ask Ricki Gervais), which destroys the argument that it’s not “natural.” If it’s not a choice, and it’s a well-established part of the human condition, there is no reason why they should not enjoy the same benefits of marriage that straight couples enjoy.

Legally, marriage equality has quite the platform to stand on, namely section 1 of the 14th Amendment.  It states, “…No State shall make or enforce any law which shall abridge the privileges or immunities of citizens of the United States; nor shall any State deprive any person of life, liberty, or property, without due process of law; nor deny to any person within its jurisdiction the equal protection of the laws.” This section of the amendment was originally passed to protect blacks against discriminatory laws, but the same law can and should be applied to the issue of same-sex marriage. Simply put, the 14th Amendment gives a full-throated endorsement of equal rights under the law in the U.S. We have not always lived up to that standard, but we should. It is written in the Constitution that we need to hold ourselves accountable for the equal protection of our citizens, and we are currently failing that charge.

Finally, there is the issue of love. As a straight man, I am allowed to marry the one I love (assuming she loves me back). Even without religion, marriage is still a special institution, one that I hope to take part in one day. Now, I can marry any woman I want, but this was not the case as recently as 1967, when the Supreme Court struck down laws that banned interracial marriage. There were no valid legal or moral reasons to keep interracial marriage illegal, just as there are no valid legal or moral reasons against same-sex marriage today. Then, as it is now, two people in love should be able to get married, should they choose.

Last week, Republican U.S. Senator Rob Portman became the first senator in his party to support gay marriage. He cites having a gay son as the main reason for this position change. Now, it is no longer just love for a partner, but love for a son that has driven this change of heart. Perhaps it was a cynical move on his part, but I don’t think it was. This is an issue that affects a great number of families across the U.S., and the more LBGT Americans that come out to their friends, families and coworkers, the faster this moral evolution will continue down this road.

Love and empathy are powerful tools when combined with logic and rational discussion when swaying public opinion. It is working, and working far faster than other similar fights for equality by other minorities in the past. In the meantime, we wait for the Supreme Court to issue their decision, and hope for a decision that fits the current moral landscape of America.

← Dog is My Co-Pilot
The North Korean Humanitarian Dilemma →

1 comment for “A Win for Rational Thought: The Fight Over Marriage Equality”