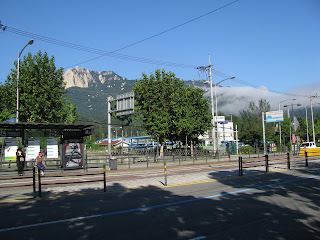 I awoke to my alarm at 7:07 this morning with one thing on the mind: I’m going to climb a mountain today. When I peaked out the window through my blinds, any remaining doubts were immediately nullified, it was going to be a great day. It was sunny and clear and the air even had a touch of an autumn chill. I ate breakfast, packed a sandwich for lunch and headed out with my traveling companion, Sydney.

Now, I had heard that I could bring my dog on the subway but this was my first attempt to actually do it. When we walked up to the turnstile there was no one around, so we just slipped through. A man waiting for the next train was delighted to see her and then asked me with a puzzled look, “Can you bring her on here?” I guess so! For the first few stops, Sydney was visibly disturbed by the whole experience. She crawled up on my lap and was shaking out of nervousness. However, by the time we reached our transfer station she was more or less fine. On the second train several Koreans spent most of the trip trying to get her attention every few seconds. She sniffed their hands, let them pet her, turned around and returned to my feet to curl up. This process repeated for the next half an hour.

Even before we left the train station I was blown away from the scenery. The mountains seemed to come out of nowhere, right out of the urban landscape. Now, I must confess it felt strange going hiking when you could reach the destination by subway, but I didn’t really have much of a choice in this situation, did I? 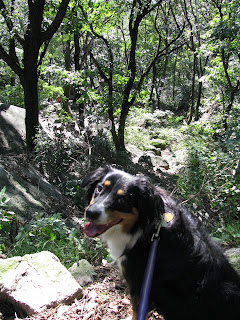 The Lonely Planet calls the Koreans “The World’s best dressed hikers,” and I’m inclined to agree. Dobongsan is no Everest, it’s approximately 740 meters tall and takes a little over an hour to hike to the peak from the entrance of the park. I wore a tee-shirt and jeans and carried a light backpack for water and my sandwich; I felt horribly, inadequately under-dressed. Everyone I saw, spare for the occasional foreigner, had hiking jackets, pants, boots, walking sticks, hiking backpacks, gloves, hats, etc. On the walk from the train station to the park I could have stocked up at any number of places, had I been so inclined, everything from hiking gear to soju. There was even a Dunkin Donuts at the entrance to the park.

However, we ran into a bit of a snag at the gate, a stern-looking park ranger pointed at my dog, told me, I assume, that I couldn’t bring her into the park, and then walked off. I guess he was expecting me to just turn around and head home. Well, we hadn’t hauled our asses all the way to the other side of the city to not hike, so we booked it into the park and started our ascent.

The climb itself was great. Most of the trail followed a stream up the mountain, and for the most part it wasn’t too challenging. Sydney took well to the mountain, too well, in fact, I had to keep pulling her back so I could keep up. We took a couple of breaks on the way up, and I brought a small bowl so she could drink water.

The summit seemed to come out of nowhere, and the view over Seoul was breathtaking. The size of this city is difficult, if not impossible, to describe. Despite knowledge to the contrary, I can’t help but believe this city to be infinite. We stayed at the top for a few minutes, taking pictures, drinking water, and taking in the view, but there was more to see! I had read about a couple of temples throughout the park that I definitely wanted to visit. 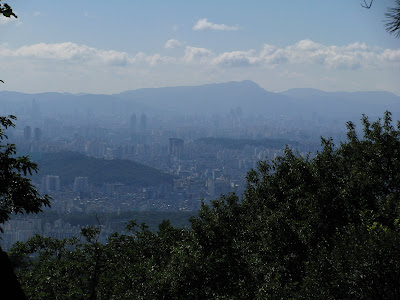 BUT we did not make it there. The moment we started back on the trail another park ranger was standing in the middle of the path with another stern look on his face. This would be the end of the line for us, we were sent packing off of this nature oasis in the middle of the metropolis. At first he wanted us to take a different path back down the mountain, and I’m using a very liberal definition of “path.” As a matter of fact, I couldn’t tell where he wanted me to go, but it looked steep, unmarked, and dangerous. When I tried to point back the direction I came, he objected and pointed back down the mountain. We were at a bit of an impasse: he wanted me to walk off a cliff, and I wasn’t too keen on the idea. Thankfully a younger ranger came a along and he negotiated with the old, grumpy man. Then he told me, “I think that way is steep and very dangerous.” I agreed. “So maybe you should go back the way you came.” So I departed. The old man probably thought if I did that I would just go back to hiking other trails, which, was tempting. However, I didn’t need to be told a third time, I decided to play it safe, and head back down the mountain.

We arrived back at Gangdong Station (my stop) slightly before 1 PM, completely exhausted, but happy as could be.

← They Call it Soccer, too
A Good Week for a Good Week →