Sometimes we plan outings weeks in advance. Others, we plan after last call at the pub mere hours before departing. When I was invited to hike Dobongsan with my co-worker Fergus on Friday night, it was clearly the latter. This would be the second time I had hiked this mountain, although I hoped to complete the hike without being kicked out of the park. 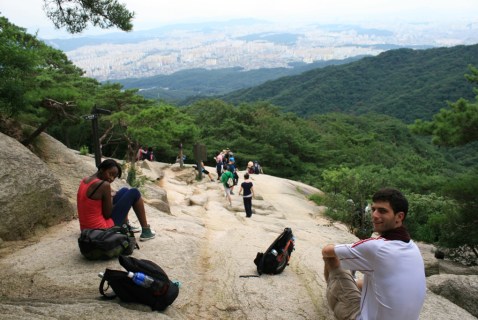 Sin and I on Dobongsan

I met up with Fergus and his girlfriend, Sin, near the gate of EV at quarter to nine. Fergus had originally wanted to leave around seven, but relented in order to accommodate another friend. Naturally, he cancelled. Regardless, we jumped on the 2200 bus to Hapjeong Station, rode the #2 to City Hall, and the #1 the rest of the way to Dobongsan.

[tb_google_map] It’s an interesting experience approaching a national park by subway, but it is a decidedly better experience than being trapped in traffic in Pigeon Forge and Gatlinburg. The gimbap and hiking gear vendors don’t hold a candle to the nightmare of air-brush tee-shirts, and knife stores that await anyone en route to The Great Smoky Mountains National Park.

The weather was absolutely perfect for hiking. It was warm, but not as humid as it had been, and the sun spent most of the day behind light cloud cover. Most importantly, the rain had abated long enough to allow us to get up and down the mountain safely. 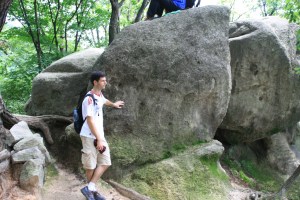 Upon entering the park, we were quickly picked out by a well-meaning Korean hiker who was dressed in all black, spare for a wide-brimmed tan hat. He would be the first of many Koreans to ask where we were from, “Ireland” “South Africa” “U.S.A.” Occasionally they would ask me a follow up, “What state?” Tennessee. “Ah…do you know Jack Daniels?” Too well.

The Man in Black would stay with us most of the way–disappearing from time to time, but always returning. We made our way up to the first peak, and enjoyed a nice gimbap lunch. Fergus and I had both hiked this mountain before, albeit on separate occasions, but neither of us had made it to the final peak. Turns out, we still had quite a long ways to go. 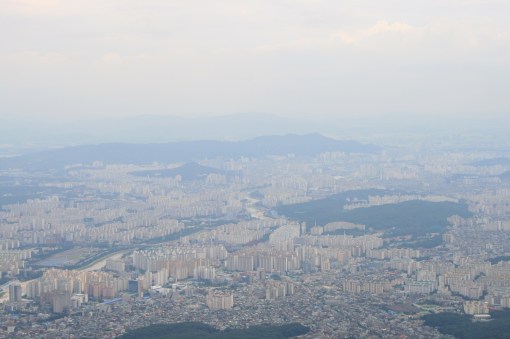 While the view from the first peak was spectacular, the views continued to become more and more grand. I must have used the word “Wow” no less than 15 times on our final ascent to the top. The last little bit was especially tricky, as the trail ended and we were left to use ropes and handrails to help us up the steep, sheer rock walls. Fergus and I made it to the peak first, followed in a few minutes by Sin and The Man in Black.

The peak was nearly devoid of vegetation, and allowed us a 360-degree view of Seoul and the surrounding area. To the south and west Seoul stretched out before us as far as the eye could see. From this elevation, the apartment buildings looked more like those seen on Sim City–so similar and regimented that they could not possibly be real. To the east, the last vestiges of Seoul tapered off. And to the north, rolling, tree-covered hills spread out before us to the horizon. 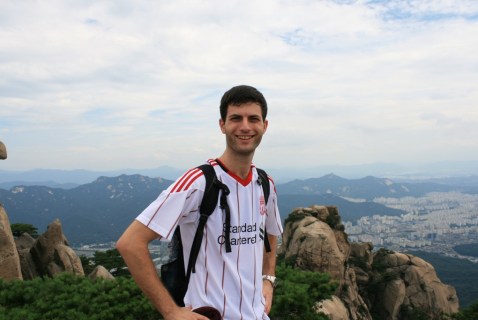 At the peak, Sim City in the background

Between posing for and taking pictures, I was able to have a few quiet moments of reflection on the peak. It had been nearly a year since I had made my way back to the Far East; so much had changed and so much had remained the same. A job–any job–had seemed like a godsend last year. Not only do I still have a job, I have a better one than when I arrived, and I’m even more thankful for my employment, all things considered.

Just last week Grandpa Duke noted how happy I sounded, and indeed, felt. It was, and is, true. I had not been this happy both socially and professionally in a long time. Of course there are holes in my life, but they are no longer as overwhelming as before. However, as in life, we cannot stay on the peak forever, and the decent is sometimes just as, if not more, challenging than the ascent.

We worked our way back down the mountain at a slow amble, with an occasional embarrassing–but otherwise harmless–slip-up. Our timing was perfect, because as soon as we found our way to the  train platform, it started raining. So we rode the train, watching the hills fade into the distance as the rain pelted the windows. Before too long the train ducked back into a tunnel headed for Seoul.

We were exhausted, but in that wonderful way that can only be as a result of a real accomplishment. And very few things in the world feel better, than a nice hot shower after a nice long hike. A hike, incidentally, that ended of my own accord.

A special thanks to Fergus Scott for the photos; this entry would not be complete without them.

← Raining on My Seoul, Part 2
Japanese, Koreans, and Russians, Oh My! →