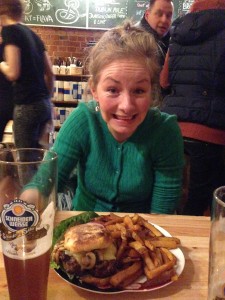 Author’s note: After two wholly depressing blog posts (Destroyed by Belief and Liberty and Justice for All?) I thought I’d give everyone a reprieve from the doom and gloom, and talk about something great: burgers.

In fact, I objected to the whole notion that such a thing as a “Foodie” could even exist, right from the first time I heard the expression:

“OK…so do you want to try that new burger place?”

“Oh! You mean the one with tofu burgers, special aioli sauce, and gluten-free, vegan buns?!”

“Um…no. The place with real meat, heart-stopping burgers, and where they’re still confused about the difference between ‘vegetarian’ and ‘vegan.'”

It became clear that “Foodies” didn’t really love food, but loved eating at trendy places and bragging about it. This is not to diminish the creative, innovative, or even “hip” restaurants out there. I enjoy a unique dining experience as much as anyone else, but equally there’s something to be said about “normal” food done exceptionally well.

So, being a human animal, I like food, but I don’t feel the need to write about it all too often. This is a clear oversight in my ongoing travel narratives, because I really do like food. I consider it one of the best things about traveling. Trying and enjoying new food is as worthwhile an adventure as anything else you’ll see, smell, touch, or hear.

A great meal will often be one of the highlights of the trip. Christine and I still reminisce about a great steak in Argentina, or malai kofta in Agra, or (in the case of our latest trip) a great burger in Berlin.

Now, I’m going to take a moment to digress about burgers made outside of the U.S.A. Generally it’s difficult to find a great one. The burgers I’ve come across all look like a burger and taste like a burger (although their attachment to mayo is rather disturbing). However, they’re all lacking that certain je ne sais quoi that makes America burgers a cut above the rest. And yes, I feel guilty even using a French phrase in that last sentence.

Throughout all of my failed attempts to find a truly great burger outside of America, there was one thing that was missing, and I finally put my greasy finger on it in Berlin. Simply, it was attitude.

The restaurant in question, The Bird, was established in 2006 in former East Berlin, not far from where The Wall once stood. We arrived without a reservation on a Tuesday night and the place was packed. The waitress, who spoke impeccable English, seated us at the far end of the bar, literally the two last spots in the joint. Our good fortune continued when the server told us it was happy hour–correction: angry hour–and the beer we had ordered (Schneider-Weisse, our favorite Bavarian beer) was 2-for-1. We hadn’t planned on drinking a liter of wheat beer before our night train, but we certainly were not going to say no to free beer!

Then we opened the menu and saw the following: 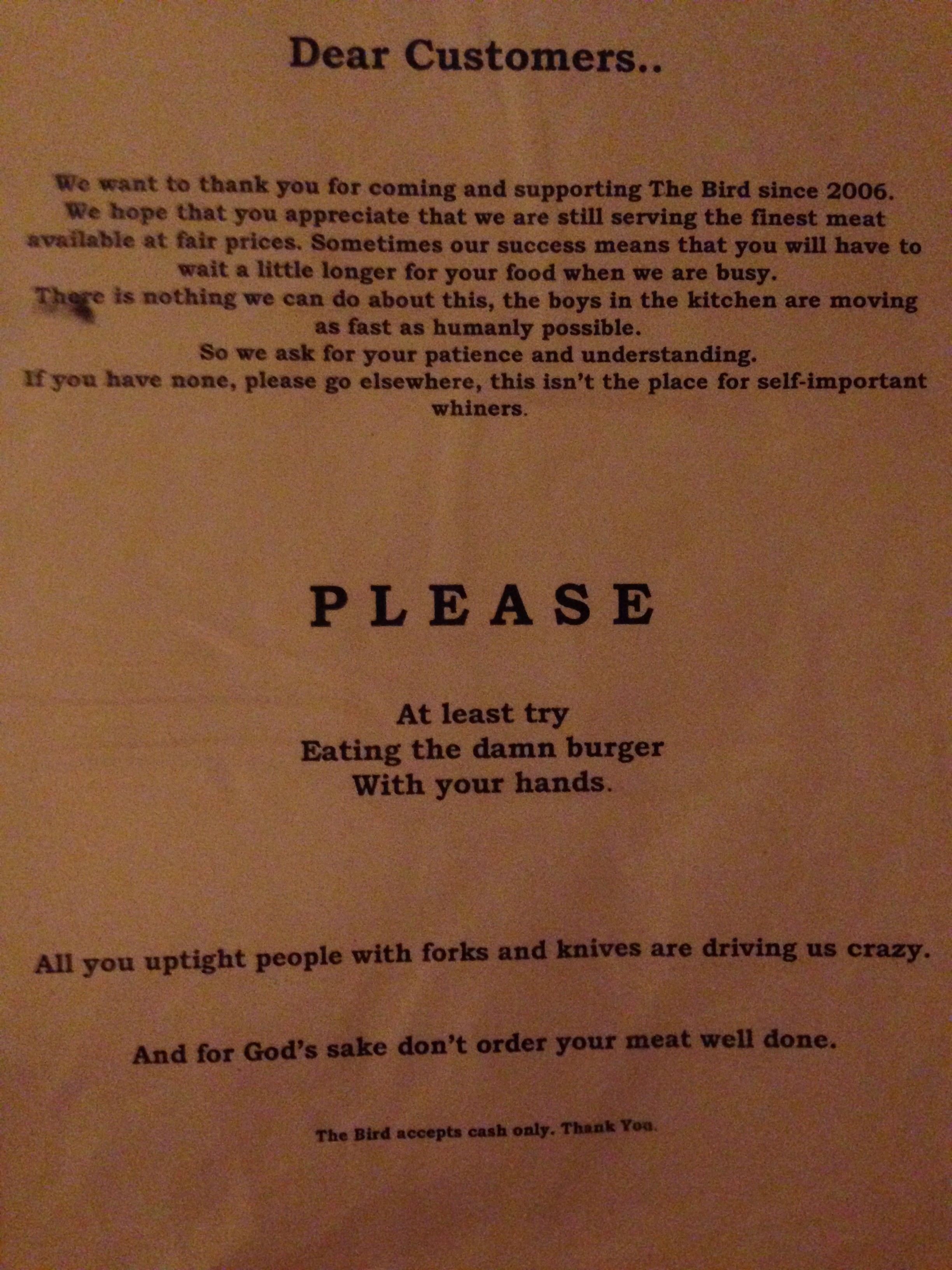 This has to be the greatest first page in the history of menus, and I can’t even think of a close second.

I ordered their house specialty–appropriately named “The Birdhouse”–and I wasn’t disappointed. Two medium rare beef patties, cheese, bacon, sauteed onions, all topped with ketchup (not that abhorrent pretender to the throne mayonnaise). As ordered, I used my hands, and quickly gobbled down this ball of greasy deliciousness. And it was delicious. The burger was easily the best I’ve had outside of America, and when Christine asked me to help finish hers, I happily obliged until I could not possibly eat another bite. Most nights I have more self-restraint, but on this occasion I ate until it hurt.

The restaurant had generously provided a paper towel roll on each table, a necessity, even after I had licked my fingers clean. The towels reminded me of eating at various barbecue joints all over the South, most of which employed similar tactics (the finer establishments often also provided moist towelettes).

The Bird was the perfect way to end our long weekend in Germany’s capital city. It’s easy to walk through Berlin and see its shattered, tragic past, but the city doesn’t get enough credit for rebuilding itself into a vibrant, cool, and creative town, equal to other European cultural meccas such as Paris, London, or Rome. An American-style restaurant might not seem like a big deal on the surface, but it is when it is exceptionally done (and the burgers not “well done”). Such a restaurant couldn’t exist without a creative subculture, willing to try and support new things.

So, to Americans and non-Americans alike, if you’re in Berlin and looking for a fun experience and a damned fine burger, do yourself a favor and stop in The Bird.

← Liberty and Justice for All?
A World Without Borders: A Pale Blue Dot →