No, I didn’t get into funny mistranslations, or Japan’s bizarre sexual culture. I hope this sign suffices for both.

Author’s Note: When I set out to write this piece, I didn’t think it would take so long to fully convey my complex feelings about Nagasaki. As such, it has become a series within a series, divided into two parts. If you’ve missed my previous posts in the “Strange Places I’ve Called Home” series, please check out my posts on Milwaukee, South Florida, and Knoxville.

Of all the strange places I’ve lived, Japan might have been the strangest, and keep in mind, I’ve lived at a fake castle approximately two miles from the North Korean border. It was also at one of the strangest times of my life. I was a fresh college grad, expected to teach children, but I was still learning how to be an adult.

There was a time in my life when I was not so cavalier about packing up, leaving my whole life behind, and starting all over again on a new continent. There’s a first time for everything, and my first time living abroad happened to be in a small village on the outskirts of Nagasaki, Japan.

Although I had been dead-set on joining the JET (Japanese Exchange Teaching) Program for nearly a year prior to my departure. A great deal of my energy was committed to being accepted into the program, and not to the consequences of that decision. Mostly, I occupied myself with the task of finishing university on a high note, working at Waldenbooks, and waiting to hear back from the Japanese Consulate in Atlanta. It took me months to gather all of the necessary materials (in triplicate, of course) and mail off a thick envelope, containing more pages than most crime novels. Then I waited for a few months, until I got a short email asking me to interview in person in Atlanta. I drove about 8 hours that day; the interview lasted less than 20 minutes. A few more months hence, I received another short email, this one congratulating me for making the 2006-07 JET Program waiting list. Did this mean I was accepted? Perhaps. When could I find out? They couldn’t tell me, and I was instructed not to call and ask.

After another two months of waiting, and with my apartment lease winding down, I had all but given up hopes of landing a spot in that year’s contingent of JET teachers. Instead, I had landed an interview for another job, this time in Chengdu, China. The Fates had other plans, and a wicked sense of humor, so naturally the day of the interview, I received a call from the Japanese Consulate in Atlanta, asking if I was still interested in working in Japan. After all of the time and effort, how could I possibly say no? From that day forward, I had less than six weeks to pack up and say goodbye to my life in Knoxville, Tennessee. The time passed in a blur, and I didn’t even know where I was going to end up yet. I could have been anywhere from tropical Okinawa to frigid Hokkaido.

With less than three weeks before my departure, I learned that Nagasaki–a city whose name is forever tarnished by that horrible day in August of 1945–would be my home. Before I knew it, I was saying tearful goodbyes, first to my girlfriend (who shortly thereafter became an ex), and then my Mom, who dropped me off in a new suit at a ritzy hotel by the airport, where the new class of JETs were meeting prior to departure. We were thrown into the deep end. Most of us were recent college graduates, almost all younger than 30, and mostly younger than 25. After checking in, we walked around the air conditioned lobby, in our new suits, socializing and acting like we were older than we were. The official “Orientation” was short, and unmemorable. The night went by quickly, and before I knew it, I was several glasses of whisky into deep conversations with people I would never see again after that night.

The next morning, we all went our separate ways, despite our shared common destination of Tokyo, for yet another, more thorough, three-day JET Orientation. Some of us flew through Minneapolis, some through Detroit, or Toronto, or New York. I flew through Chicago O’Hare. I can’t even imagine the logistics of setting this up every single year. All the same, I was happy to be flying through Chicago. It was here that my first ever trip abroad started, and as we departed, we flew directly over Milwaukee, allowing me one last ceremonial “Good-bye” to anywhere that could remotely be considered my home.

Several times throughout the day, I had these exact words travel through my brain, “What the FUCK am I doing?” Once was on the way to the airport in the hotel shuttle. Another was after boarding the plane. And finally again when our plane left U.S. airspace just off the coast of Alaska. It reminded me of the time I went bungee jumping–I hadn’t been frightened until I started leaning forward on my jump and thought, “Perhaps this isn’t the best idea,” but then, as in now, it was too late to turn back.

This all brings us to Nagasaki. The city should be famous for any number of reasons, but all of those are overshadowed by a single bomb which effectively ended World War II. The city should have been known for its centuries-long tradition of international trade with China and Holland, even when the rest of Japan eschewed the outside world. Or for being the proud owner of the oldest stone archway bridge in Japan. Or for the Lantern Festival, or the local specialty noodle dish champon, or any other number of things. But instead, it’s known for its dubious distinction of being one of two cities devastated by an atomic bomb. 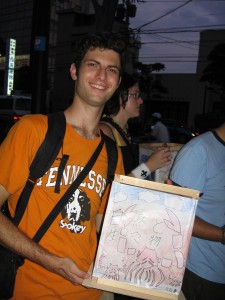 Me, before putting my lantern in the water to commemorate Peace Day.

That day is never far from public consciousness, and my introduction to life in Nagasaki was greatly shaped by “Peace Day,” the annual commemoration of the bombing on August 9th. For one, it was the day I was introduced to my school as the new English teacher. We had just watched a two hour animated movie about the bombing of Hiroshima as told through the eyes of a child, and then I was asked to stand up in front of everyone and say (in what will undoubtedly go down as the worst Japanese in the history of the World) “Hi, I’m Zachary Marx, your new English teacher. I’m from America. Nice to meet you.” There are moments when speaking publically that you hope for a raucous laugh from the audience. This was not one of those moments, but laugh they did. It was quite the shock introduction, and in retrospect, probably the first clue that I might have not been the right fit for the job or Japan in general.

It is difficult for me to reflect on my time in Japan with any sort of clear, unbiased perspective. I don’t know if I was too young, or too immature to fully appreciate my new environment, or if Japan was truly a bad fit for me. Regardless, when I was living there, I was the proverbial fish out of water every single day.

After two consecutive summers in China, I thought I would have been more prepared for life in the Far East. If anything, my previous experience actually made adjusting to life in Nagasaki more difficult. Japan is a land of countless unspoken rules, and holding yourself to a certain standard. In China, chaos reigns supreme, and manners aren’t really a thing. As such, I never really felt comfortable or settled in Japan. I always felt like I was committing a cultural faux pas (because I almost certainly was), and I just didn’t see the big deal about eating and walking at the same time, or wearing scented deodorant, or a million other things that I did without thinking about it, but which offended the locals.

To make matters worse, I didn’t ingratiate myself to my colleagues at all. I thought I knew what was expected of me from the various orientations and a year of researching the JET Program, but when I arrived, all of that was thrown out the window. The stated goals and expectations of the Program often conflicted with the stated goals and expectations of the local school boards, and by the time I figured that out, it was already too late. Also, I was replacing a teacher who had been there for three years, spoke fluent Japanese, and was loved by her school (though apparently not any of the other expats). These were big shoes to fill, and I failed miserably.

I learned, unfortunately when it was far too late to do anything about it, that my difficulties with colleagues were not just minor differences in philosophies or culture, but were major problems from their perspective. Perhaps if I had been more culturally attuned to the Japanese work dynamic, I could have seen some warning signs, or solved some of these problems with one-on-one discussions with my coworkers, but instead the issues were passed up the chain of command, and I heard about it all from the head of the English Department at the Nagasaki Board of Education on an unseasonably nice day in February. It was an incredible shock, and instead of having a discussion about the best way to go forward with my colleagues, I was being read a prepared list of wrongs by the head honcho. It was far from productive, since I was still never given any clear direction other than, “Don’t do these things I just listed.”

I’m not going to play the victim here–there was a great deal more I could have done–but given the ample preparation time I had, I would have been more than happy to prepare lesson plans if I had known from my coworkers what we were doing ahead of time. Some of the complaints were legitimate, but others like the aforementioned deodorant issue were just simple cultural differences that had been blown up into major problems. Granted, the Japanese are not known for being so culturally open minded, certainly not with their own citizens, and there was never a foreigner exception for me either.

With eight years’ perspective between going to Japan and now, I see my failures in a slightly different light. There are things I would do differently now, sure, but this wisdom has only come about as a result of my failures during that year and since. Although it may sound clichéd, failures are only failures if we do not learn from the mistakes and change our approach going forward. Problems with fitting into work and society aside, I still look back at Nagasaki with a sense of wonder, because it is so different to any other place I’ve lived or even visited. 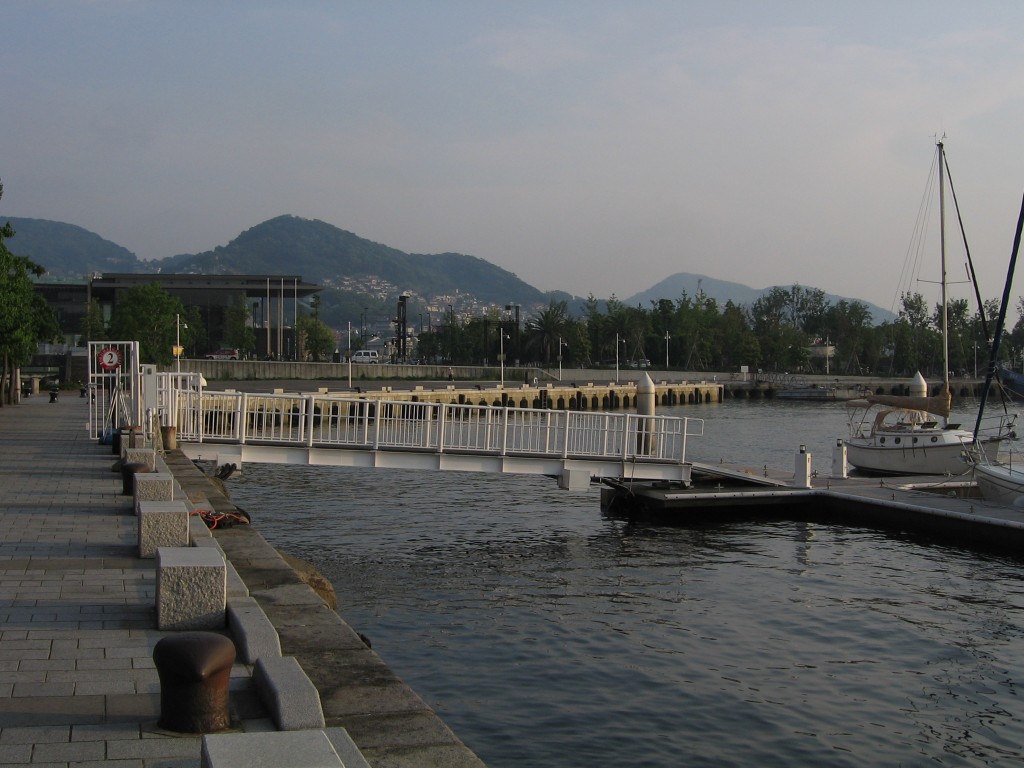