Seriously, what the hell was he thinking?

Sunday, I found myself watching a soccer match that would soon become a headline grabbing event for all the wrong reasons. The Sunday afternoon match featured two of England’s biggest clubs, Liverpool and Chelsea. It started out with a story line any Liverpool supporter has seen too often: the Reds going down a goal after looking like the better side. At halftime, frustrated by the results so far, I distracted myself by preparing potato soup in the kitchen. Just as the ingredients were heating up and coming together in just the right way, so was the action on the pitch. And then it all went wrong, at least as far as the game went, the soup turned out fine.

The game, one with big implications for next year’s Champions League, should have had enough drama to fill the sports pages without any extracurricular activity. Unfortunately, a man known for creating controversies, Liverpool’s Luis Suarez, inexplicably bit another player, Chelsea’s defender Branislav Ivanovich. The ref didn’t see it, Suarez was not penalized (or sent off the pitch, as he should have been), and then scored the late equalizing goal with seconds left. With an assist, a yellow card (for a separate incident), a bite, and a game-saving goal, all coming in the second half, Suarez showed his genius and his madness to the fullest extent of his capabilities.

The incident created a firestorm of controversy immediately after the match, and it got me thinking about the nature of sportsmanship. Clearly biting another player is beyond the pale, and completely indefensible. However, this incident brought to light some of Suarez’s other past transgressions. 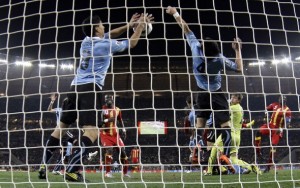 Let the records show that there were at least TWO Uruguayan players  illegally attempting to swat this one away. Perhaps it’s cultural.

Perhaps the most famous–or infamous–of these is his handball late in the game in the quarterfinal round of the 2010 World Cup. On one hand (sorry, couldn’t resist the pun), he helped his team by preventing what would have surely been a game-winning goal for the opposing side. On the other, he decisively altered the game, thus forever denying Ghana a chance at the World Cup on African soil. The rule-book is very clear on this: he was immediately given a red-card and sent off, and the opposing side, Ghana, was given a penalty kick. In a more just world, Ghana would have scored on the ensuing penalty, or won the penalty shoot-out that followed, but no one ever said life, or sports, was fair. Instead, the penalty rattled off the crossbar, Uruguay would go on to win the penalty shoot-out, and handball allowed Uruguay to move on to the semi-finals.

The question is: when is breaking the rules for your team’s benefit justified? Even after three years, my friend Renato still refers to Suarez as “That jerk from the 2010 World Cup.” In American sports, we seem to have far less of a care for the concept of “fair play.” The best analogies I can think of, though they are far from perfect, would be in American football, with a game-saving pass interference in the end zone late in the game, or fouling a player in basketball to ensure they cannot get a game winning or tying three point shot away. These examples of using the rules to your advantage happen all the time, and as Jim Rome is famous for saying, “If you’re not cheating, you’re not trying. And it’s only cheating if you get caught.” In this context, not only is cheating acceptable in most American sports, it’s admirable.

I’m in no position to chastise players for bending the rules. I’ve been just as guilty of offenses under far less dire situations. In one of my last games with the Kimchi Kickers, my mostly German soccer team in Korea, I ran into one of these situations myself. We were winning 2-0 with about 15 minutes left against a good Malaysian team. 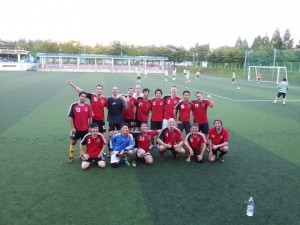 In our previous outing against this team, they showed no mercy in running up a 7-3 victory at our expense. I was defending one of their strikers, the ball came our way. He was onside, and would have had me beat and been through on goal. I reached out, grabbed his jersey, and slowed down him enough to prevent him from getting on the end of the pass. I was shown a well-deserved yellow-card, and they were given a free kick. One of my teammates, a Belgian player, called me out after the game for the “tactical” foul, but to a man, the Germans thought it was a good one. This might explain why Germans have a better national team, but I digress.

We held on to win the game, something that may have been more difficult with only a one goal lead. I justified the move by knowing that it was against the rules, and knowing that I would very likely draw a yellow card. I took one for the team, by offsetting a mistake (not covering the player well enough) with a foul. Right or wrong, I would do it again in a heartbeat.

Although soccer is often derided by American sports fans for the excess of diving (again, something Suarez has been known to do), this, along with other rule infringements are frowned upon by fans. And in an unlike almost any other sport, soccer players will usually stop the game so an injured player on the opposing team can get treatment (in fairness, I also must point out that this sometimes gets abused).

To get back to The Bite, there were immediate calls after the game for Liverpool to get rid of him. To put this in perspective for my American readers, he has been one of the best players in England this season and is second in the league in goals. When I look at similar indiscretions on and off the field in American sports, there is not a similar uproar or demands that a team get rid of a player. 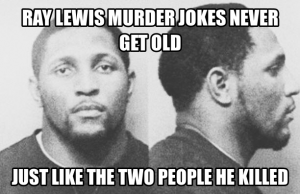 Instead, we turn a blind eye to a litany of criminal activity, so long as these players perform at a high-level. The excellent college football blog Every Day Should Be Saturday even keeps tabs on these incidents in an offseason mock competition the Fulmer Cup. Ray Lewis was caught up in a murder rap. Mike Tyson was convicted of rape, bit a man’s ear off, and all it took was an appearance in The Hangover to rehabilitate his public image. The only man I can think of that was forced off a team from an indiscretion is Michael Vick, because if there’s one thing Americans won’t tolerate, it’s violence against dogs. Yes, the aforementioned examples have nothing to do with cheating on the field, but are no doubt far worse.

To be clear, I’m not defending Suarez, but instead, voicing my approval for the outrage over the incident, and advocating Americans to hold their own sports stars to the same level of accountability. As fans, we expect our players to win at all costs. And as fans, we are willing to tolerate far more wrong-doing from talented players. This surely needs to change. When we take a step back, we realize that it is just a game. 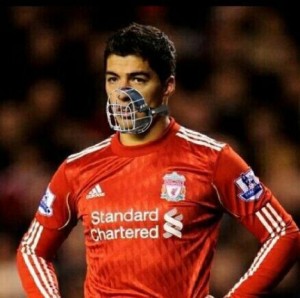 Beat me to it, Internet.

I wonder if the typical Uruguayan sees the run to the semi-finals with an asterisk like the rest of the sports world does? Or, if Barry Bonds sees his home run record as legitimate like the rest of the sports world does not? Herein lies the problem: to succeed in the ultra-competitive world of sports, modern athletes must necessarily have a “win at all costs attitude.” Suarez definitely fits this competitive mold. His fate with the club and in England remains in doubt, but in the meantime, I hope he takes some anger management classes, or at the very least, wears a muzzle to work.