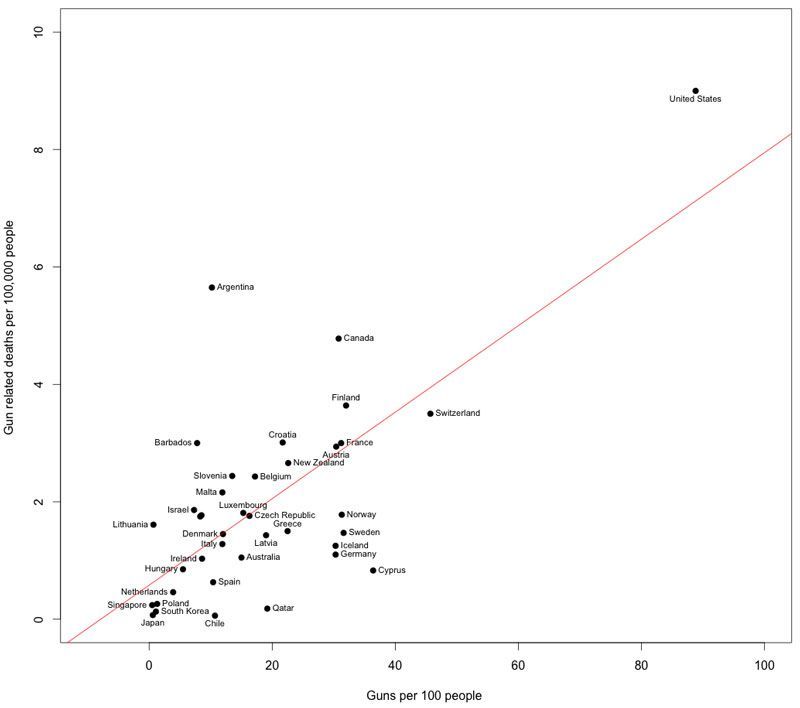 When it comes to terrorism, liberals are often accused of “seeing the world as you want it to be, not as it is.” It’s now time for liberals to accuse conservatives of the same when it comes to guns.

So here’s how it is in America: over 30,000 people are killed by guns every year. From 1968 to 2011, more Americans died from firearms (1.4 million) than from all U.S. wars combined (1.2 million). There are now more guns in America than Americans, and the U.S. has far and away the highest number of guns per capita in the world. A gun for every man, woman, and child, and children frequently use them, often to deadly effect.

In America we have more guns, easier access to guns, and more deaths from guns than any other OECD country. And study after study shows that these things are connected. To ignore these facts is to see the world as you want to see it, not how it is.

This brings us to the tragedy in Orlando. As of this morning, there are conflicting reports as to the motivations of Omar Mateen, the man responsible for the terrorist attack on a gay night club in Orlando, which has now become the single deadliest mass shooting in U.S. history, a country where such a distinction has a lot of competition. His parents and ex-wife are adamant that his actions were not religiously motivated, and the attack did not fit the profile of other well-orchestrated attacks by known terrorist organizations. He was an abusive husband, steroid user, hated gay people, and an all-around shithead. Mateen could have been connected to a terrorist organization, or he could have been a lone psychopath.

Regardless of his motivations, Mateen, who had been monitored by the FBI, was allowed to legally purchase several firearms including the infamous AR-15 (which was also used in San Bernardino and Sandy Hook massacres, among others). And like so many murderers before him, he had no trouble getting his hands on deadly and powerful weapons. There was nothing standing in Mateen’s way after he made the decision to commit this atrocity.

I have zero hope that this attack will change anything. When nothing changed after Sandy Hook, an attack where 20 kindergartners were murdered, I realized that ship had permanently sailed. Instead, all we’re left with is the well-worn phrase, “thoughts and prayers.” I’m sure you’ve seen it countless times. “Our thoughts and prayers are with the victims and their families” a politician will begin and end the discussion with that one vacuous line.

Prayers will not stop the next mass shooting. Nor will they stop the next terrorist attack. Indeed, the hatred that some misguided holy folk get from their prayers only fuels the next round of prayers from their victims, just before their untimely demise.

We should not #PrayForOrlando or #PrayForParis, but #ActForOrlando and #ActForParis. As much as terrorists wish for this to become a holy war, and as much as lone wingnuts wish for us to see them as our gods, prayer is definitely not the answer. Both terrorism and gun crime are man-made problems, and require man-made solutions. Unlike with Jules in Pulp Fiction, God is not coming down from heaven and stopping bullets.

Combating terrorism is a complicated, multi-generational endeavor. Keeping guns out of the hands of terrorists in the U.S. doesn’t have to be. Only eight states require background checks for all firearms sales. That means in most states you can go to a gun show, or a guy you exchanged a couple of emails with on Craigslist, and legally purchase a gun. In some states, like Florida, it is actually easier to by an AR-15 than a handgun, because there is no waiting period for guns you need two hands to operate. And even in states with more stringent background checks, being on a terror watch list or the no-fly list does not disqualify someone from owning a firearm. This is madness.

We could mandate strict criminal and mental health background checks. We could mandate liability, safety measures, licensing, and registration (as we do with other potentially deadly objects, cars). And in some cases, yes, we could ban and/or take away certain kinds of guns. These are choices we can make. We can also choose do do nothing, with the operative word here being “choose.”

“Thoughts and prayers” are meaningless without action to back them up. Without action, praying is just wishful thinking. Countries like Denmark, and Germany, and Australia didn’t pray away the gun crime, but passed strong legislation to limit, and in some cases ban, weapons that have the capacity to end dozens of lives in a few horrific moments.

This is all to say that none of this will change because of this event. The mass shootings grab the headlines, but even those are under-reported. Between Sandy Hook and Orlando there were 998 mass shootings. And since that day at the end of 2012 over 100,000 people have died from the barrel of a gun.

It has been about 24 hours since yesterday’s Orlando massacre; statistically, nearly 100 more Americans were killed by a gun in that time. But please, tell us more about your thoughts and prayers.