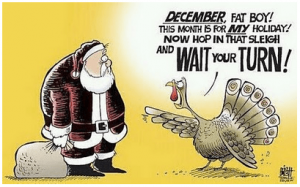 This piece is a continuation of my thoughts on Working to Live. If you’ve not read the previous posts, it’s basically the philosophy that life is too short to spend it unnecessarily grinding away at work instead of doing something–anything–that gives your life meaning and fulfillment. We should be working to live, not living to work.

It’s November again, and that can only mean one thing in America: The Culture Wars are heating up again. There are two wars in particular worth mentioning: the fictional “War on Christmas” and the very real “War on Thanksgiving.”

Conservative Christians have long bemoaned the secularization of America, and are quick to accuse who won’t let them have the holiday season all to themselves as attacking Christmas. Unfortunately, this narrative doesn’t match the reality, one which has seen the massive commercialization and growth of the Christmas season, resulting in a full-on frontal attack on another important family holiday: Thanksgiving.

Over the last decade, we’ve seen retailers push the beginning of “Black Friday” earlier and earlier. First it was 5 AM, then 4, by 2010 it was midnight, and in 2011 Wal-Mart (of course) pushed Black Friday into Thursday, and other retailers quickly followed their lead. Now, when there are more retailers open on Thanksgiving night–a time when families should be passed out together in food comas–than ones that remain closed.

Every year we hear the same tired arguments for businesses being open: corporations have the right to set their own hours, change jobs if you don’t want to work on Thanksgiving, and this wouldn’t be a problem if consumers didn’t shop on Thanksgiving. Let’s dissect these one at a time.

First, should corporations have the right to set their own hours? Generally, I think they should. Right now I’m living in a place where all shops (including grocery stores) are closed on public holidays and Sundays. This is the opposite extreme, and certainly not at all what I’m calling for. That said, it does have its benefits. To the consumer, this is certainly annoying, but as an employee this is a really great thing. Being forced to give your employees time off to spend with their families, enjoy their favorite hobbies (so long as that hobby isn’t shopping), or simply to relax, gives the workers much needed rest, a chance to regain strength, and ultimately will improve productivity and workplace morale. A public holiday should be precisely that: public. It’s no good if a large percentage of people are being forced to work. The same argument could be made about the 40-hour work week; as a society, we decided that working more than a set number of hours per week was counterproductive, unhealthy, and unnecessary.

Of course, certain jobs necessitate that someone be present at all times, but you don’t see police or E.R. doctors complaining. Those jobs, and others like them are necessary. However, no crazed, deal hunting parent has ever died from being forced to wait 12 hours to buy the hot new toy. Sadly, crazed, deal hunting parents have died from not waiting.

Unlike the aforementioned examples, most retail employees aren’t there as the result of a steady career or lifelong ambition. And they give up a lot for their meager paychecks as is. They must work far more 1-9 shifts than 9-5, and weekend days off are a rare treat. On top of that, they are now being expected to miss the most important American holiday of the year, simply to boost their employer’s margins a fraction of a percent. Sure, they could change jobs, but let’s not pretend that it’s easy to find new employment, especially for the average retail worker. Furthermore, why should they be forced to change jobs, just because you can’t wait another half-day for your new flat screen TV, one day out of the whole year?

From a retailer’s perspective, it all seems perfectly reasonable: if our competitor is open, then we need to be open too. And this is exactly why there are times when capitalism needs to be saved from itself. It’s the same reason why we have weekends and the 40 hour week. If someone is willing to pay, there’s no reason to side with the little guy; indeed, their first and only obligation should be to their stockholders. And this is why it’s not enough to just complain about it, or even to boycott. It doesn’t take much for these stores to turn a profit, and a small minority of rabid holiday shoppers will always be enough to make this strategy economically feasible, even if studies suggest that it could be at the expense of later holiday sales. Instead we need new legislation making it illegal for most non-emergency businesses to close on Thanksgiving (and a fair few other holidays while we are at it).

If Congress and the President worked together (I know, I know, clearly I’m in Fantasy Land now) under the guises of family values and workers’ rights respectively, we could solve this problem. It would be a big victory for the American public and the political process, and I’m guessing pretty popular as well. Of course, their corporate overlords won’t let them do that, but the thought is nice.

I think as a former retail employee myself, I feel particularly passionate about this issue. I worked a lot of crazy holidays hours, and a fair few Black Fridays, but one of the few days off I could count on no matter what was Thanksgiving. It also happens to be my favorite holiday. I may not be much for big occasions or events, but I think life is far too short to miss a single Thanksgiving if you don’t want or have to. If you work to enjoy life, then it figures that work shouldn’t get in the way of that enjoyment, especially for life’s rare and special occasions. Thanksgiving is an important American tradition, as is Christmas (and Christmas shopping). All I’m asking is to keep them separate so families can enjoy both together.