The Everglades (Florida)
Originally written February 3, 2011
Contrary to popular belief, South Florida is not merely one giant swamp. Most of the Southern Tip is, in fact, a giant, slow moving river through an enormous, flat grassland. You will not find stagnant water in the Everglades. 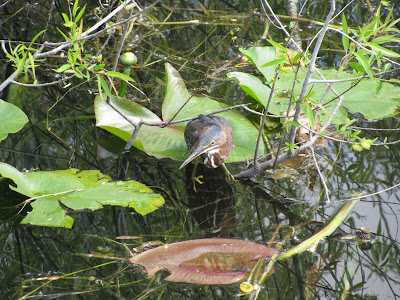 A little green heron, stealthily hunting for a meal.

The river begins in Lake Okeechobee and flows southward toward the Gulf of Florida. In that span, approximately 100 miles, the river descends a mere 14 feet in elevation. This, paired with Florida’s ideal location between sub-tropical and temperate environments creates an amazing environment for a wealth of diverse wildlife. The birds and reptiles are especially abundant. Herein is the key to enjoying a trip to the Everglades–getting down at ground-level with a keen eye to find as much wildlife as can possibly be found. Everglades National Park will not “blow away” the casual observer in the same way as Yosemite or Yellowstone will–at first glance, it is merely an open grassland–but once a moment is spent to find and enjoy the wildlife, the experience is incredible. 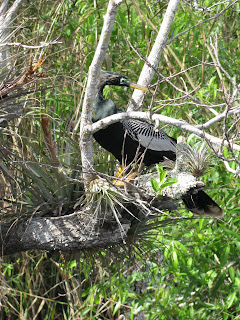 On Monday morning, my dad, Gina and I headed out to the Anhinga Trail in the southeast corner of the park. I was a bit disheartened that my grandparents would not be joining us, but I knew grandpa had had health problems lately. We were armed with binoculars, well-worn bird guides, and a packed lunch for a picnic in the park.

Once on the trail, we were greeted by our first anhinga immediately. These birds that give the trail its namesake are amazing. The males are particularly striking–black with white streaks on their wings, and since it was mating season, they had beautiful turquoise rings around their eyes. They are sometimes referred to as “snake birds” because unlike other waterfowl, they swim below the waterline and occasionally stick their long, slender necks up for air. (Their name is actually derived from a Brazilian dialect translating to “devil bird” or “snake bird”). This is a bird that Darwin forgot; they never evolved oil glands, so they can be seen after a swim drying their wings in the warm Floridian sun. 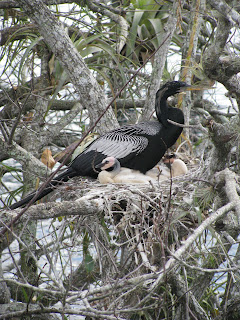 As I mentioned, it was mating season for these guys and there were already several nests with high-pitched, squeaking, baby anhingas. One male was mate-less when we stumbled upon him vigorously trying to remove a twig. We were told this is the first step in their mating ritual. The male finds an appropriate twig, gives it to a potential mate, and if she accepts they build a nest together. Oh, if only it were that easy!

The anhinga is similar to another one of the park’s residents, the cormorant. However, cormorants can be found in various parts of the world. The Chinese even train these birds to fish for them! (If you ever order fish in China, just remember that your meal very well could have come from the gullet of a bird). These birds also prefer getting their feathers wet by diving into the clear, clean waters to dart after their prey.

For about five minutes we watched as a cormorant tried to wrangle a fish. At first the only threat to an empty stomach was the fish itself, but when other birds caught wind of this epic battle, they joined the fray. This led to some infighting among the cormorants, each trying to take possession of the prized fish. 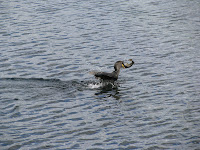 I don’t think I can properly conclude a piece on the Everglades without taking about its most famous resident, the American Alligator. These are amazing creatures, but its easy to lose a lot of respect for them in the wild. These guys are everywhere, and its rare that you see one even move a couple of feet. Even the birds don’t seem terribly intimidated by them. 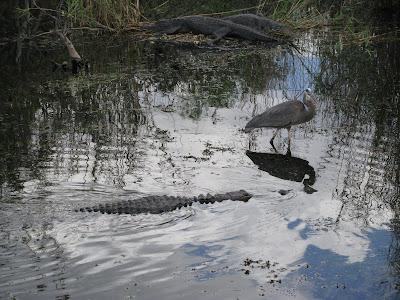 However, a species doesn’t survive hundreds of millions of years, mass-extinctions, and luggage trends without a really good design. They may appear lazy, but they’re just conserving energy, and when they want to use it, they can. Were I to run into a hungry gator in the water, people would suddenly be talking about me in the past tense. On land? Yeah, they can outrun me there too. The Everglades are also home to the American Crocodile, making this the only spot in the world where alligators and crocodiles coexist.

The Everglades are a natural wonder, and just a stone’s throw from the hustle and bustle of Miami. Humans have already encroached into this preserve, with the human population nearly quadrupling since 1960. And if global climate change leads to the rise in sea-levels we all fear, this river of life will be gone forever. I hope I can take my grandkids to the Everglades someday, just as they did with me.
[tb_google_map]
– – – – – – – – – – – – – – – – – –
Losing and the Cubs: A Lesson in Futility (Chicago, Illinois)
Originally written August 20, 2010 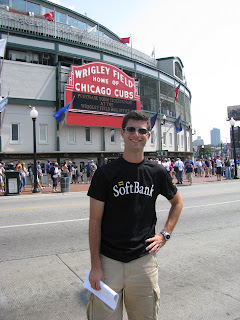 Oh, you adorable Cubbies, dependably snatching defeat from the jaws of victory, and today was no exception. For as far back as I can remember, I’ve wanted to go to a Cubs game. Wrigley Field. The Ivy. The Tradition. The Losing. I wanted it all and I finally had my chance today.

Like many great ideas, this day trip was concocted in an inebriated mind. However, unlike many of my “great” ideas, I actually thought this was a good one when I woke up in the morning. Why not? Oh, I can think of reasons: I’m preciously low on time in the States and my “To Do” List is growing out of control, packing, moving, freaking-out, packing some more. You get the idea. But alas, in my 27 years of life I had never been to Wrigley and I needed to make it happen. Especially with the knowledge that the world will end on my 30th Birthday.

It was a fantastic trip, and maybe I’ll elaborate once I have the time. Long story short, it was an amazing experience and capped off by the Cubs blowing a 1-run lead in the top of the 9th by giving up a 3 RBI triple. Final score: 5-3, Braves.[tb_google_map]

Somewhere between Milwaukee and Chicago

7:32 AM I’m on my way to Chicago for my Korean Visa Interview. I’m wearing the same suit and tie as I wore for my JET Interview at the Atlanta Japanese Consulate over 4 years ago. Thankfully I can still fit in my clothes from 4 years back, I know I can’t say the same for many of my friends.

An interesting phenomenon occurs when I don a suit. I just feel better. More confident, more mature, and ready to get down to business. However, I still feel like a bit of a poseur in a suit. To quote from High Fidelity, “I felt like one of those guys who shaved their heads and then claimed to always be punks.” I guess I’m just not used to the idea of being a grown-up in the business world. None of my friends have to wear suits to work, and I never have had to on any consistent basis.

For only the second time in my life, I’m taking a train in the U.S. The $44 round-trip fare seemed reasonable compared to the 3+ hours I would have spent in traffic, finding a parking space, etc.—particularly when I would have had to spend around $40+ on gas/parking/tolls. I generally like riding trains, and if it were a more affordable option, I would love it. I might be in the minority as far as public transportation goes, but I think this country needs a massive overhaul. How nice would it be to be able to have high-speed, inexpensive, reliable trains in this great country? Well, at least I’m going to a land that sees the value in public transit. Maybe America will catch up someday.

1:41 PM Back on the train to Milwaukee. That was a nearly pointless visit to the Korean Consulate. I was in and out in under 15 minutes, the interview couldn’t have lasted longer than 10. I interviewed with one other guy, Walker, and he asked us three questions: our name, our quest, and our favorite color. Kidding. He asked us: what is bringing us to Korea, what are our career plans after Korea, and what is our motto? I liked the last question, if only for originality. I’m sure he gets enough of the same answers for the first two questions (i.e. “Uh, I’m going there to teach and then I want to go back to school for my masters or PhD.”), so he probably just did it for variety’s sake.

My answer to the motto question was the family favorite, “It will come.” I don’t know if this is actually my motto because I seem to be fairly impatient and spontaneous with life, but it sounded good and it was the best I could do when put on the spot.

Other than that, Chicago was absolutely sweltering, especially whilst wearing a suit. Walker wore an old polo and some jeans, I both respected and hated him for it. Even the man doing the interview had gone sans suit jacket, but I guess it’s better to overdress than the alternative. OK, it’s nap time, been a long day…