Well, I have survived the journey and am settling into life as a tourist in Russia. The trip was not nearly as painful as my past excursions to China and I have not experienced the same level of jet-lag. However, Russia wasted no time in living up to its reputation as a backward country. As soon as we landed in St. Petersburg the plane came to a full stop, then pulled a u-turn on the runway and began taxiing back up the way we came-it didn’t seem safe or necessary, but who am I to judge? It’s been quite adventurous so far, we’re living in an old soviet-era hotel that makes the places I’ve stayed in China look like spas and resorts. It’s cool though, I love the adventure. It’s pretty rough and tumble up here-and a lot of old soviet mentality persists. The group seems to be bonding very well, and we’re all having a great time. We have yet to do a lot of exploring, though the parts of the city that I have seen so far have been amazing. We did go to St. Peter and St. Paul’s Cathedral along with a mass grave from the World War II siege of St. Petersburg (then Leningrad) that held over 500,000 people. It was just a stunning sight-consider this fact: less Americans died in WWII than the number of nameless people who were buried at this site. Getting away from that rather depressing topic, tomorrow we’ll be visiting the Hermitage so I’m really excited about that. Don’t worry, pictures will be taken.

Well, I’m about to run out of time at the internet cafe. I hope all is well back home and anywhere else people happen to be receiving this mail. Take care and send love!

From Russia With Love,
-Zach 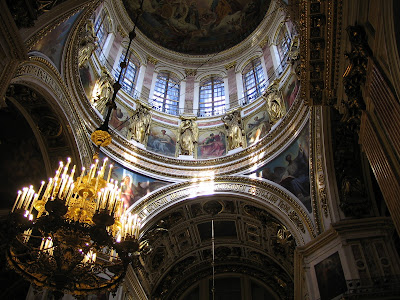 I hope you are all doing fine, as I am happy to report that I am in good health despite the Russian cuisine’s best efforts. However, our comrade Rhett has fallen with some sort of bug (my guess is either bird flu or SARS)-he’s been in the hospital for 2 days so I want everyone to think good thoughts for him (he’s good people, trust me). The doctors can’t quite figure out what is wrong with him, but have been pumping him full of anti-biotics anyway. SO, let’s recap what I have learned so far:

1. Old Russian women are short, mean and kind of look like yoda.
2. Mullets are viable haircuts in Russia (we’ve come up with a classification system for them-it’s provided hours of fun-there is the classic mulletus mulletus, the vogue mulletus rattailus, mulletus femailous and the super mullet mulletus maximus).
3. I will get charged for being a foreigner at every restaurant I attend. The place where I ate yesterday I was charged for two items I did not order. Normally the conversation would go like this: ME: Um, I didn’t order this bread-you just brought it out to me Angry Waitress: Oh, I’ll get that taken care of… but here it goes something like this: ME: Um, what are these charges? AW: Bread and Sauce ME: Oh.

Anyway, I’m in Moscow and going through internet withdrawals. Right now I’m in this super-sweet mall that is located underground outside of the Kremlin. I’d have to say that so far St. Petersburg has Moscow beat in every category except the weather. Red Square would have been cool had I not been to Tiananmen Square first (Tiananmen has the power to drop your chin to the ground by its sheer size and grandeur, in comparison Red Square looks like a playground). For anyone so concerned, Lenin is looking pretty good-our tour guide told us they have 100 people working to keep him preserved. Moscow is a pretty happening place, though outside of the Kremlin and Red Square we really haven’t found a lot worth exploring. It’s been fun, albeit uneventful. On Saturday we fly out to Perm. I guess that’s all for now-send love. 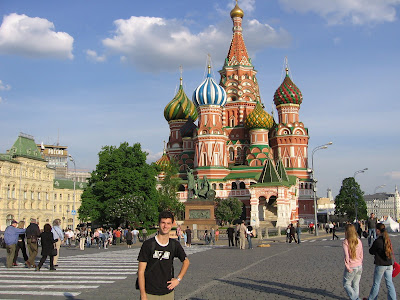