Yes, that spider is as big as our guide’s hand.

Christine’s catch. He was surprisingly tasty.

Even in the city, you’re not far from the jungle.

What can I say about this magnificent country that hasn’t already been said? Throughout my South American travels, Peru stood out from the others because of its diversity of environments and culture, and the bevy of incredible sights along the way.

From the peaks of Machu Picchu, to the depths of Colca Canyon, to the wide, lush expanse of Amazonian Rainforest, Peru never stopped amazing us. We started our Peruvian travels in the beautiful city of Arequipa, known as the White City, from its dazzling white-stone volcanic masonry which adorns many of the city’s landmarks. From there, we took a three day hike through the second deepest canyon in the world, before making our way to the ancient Incan capital city of Cuzco.

Of course, we weren’t going to go all the way to Peru without seeing the ancient wonder of Machu Picchu. The heavy evening showers gave way to a stunning and sunny early morning at the famous ruins, and the sights were well worth the money and effort to get there.

We then changed tack, moving from the high, arid desert region, to the Amazon Basin in the north. This was my first time visiting a rain forest, and the experience was memorable. We flew into Iquitos, the largest city in the world that is inaccessible by road. We spent several days in the city, and several more in the depths of the jungle. Our trip ended with a 6-day slow boat ride up the Amazon to the city of Pulcallpa, and then a flight to the capital city of Lima. 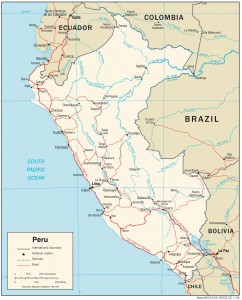