I am not currently, nor have I ever been a member of the Communist Party 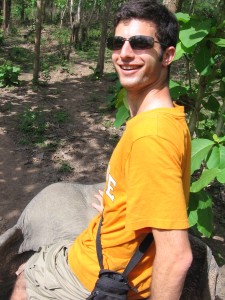 Somewhere between the growing economic powerhouse of China to the north and the developing Southeast Asian powers of Vietnam and Thailand to the east and west, respectively, lies the small, landlocked nation of Laos. Technically it’s the Lao People’s Democratic Republic, and yes, whenever a nation has either “People’s” and/or “Democratic” and “Republic” together in the title, you know you are entering a communist country. The trip was my first to SE Asia and included a couple of brief forays into the bustling Thai city of Bangkok during what essentially amounted to two long layovers at the beginning and end of the trip.

Our first mission in Bangkok was to try and hunt down some coveted anti-malaria medication. You see, the only medication available in Japan is: a) highly ineffective, b) must be taken for months prior to leaving and after coming back to be highly ineffective, and c) has a bevy of common adverse side effects including…well just about everything including (but not limited) to psychosis. Oh, and d) even our Japanese doctor advised us not to use it. SOOOO, we bounced around from pharmacy to pharmacy and eventually ended up at a hospital trying to find the drug that our doctor recommended only to be told by our Thai doctor that: a) we didn’t need the medicine, b) they didn’t have it even if we did need it, and c) he would gladly treat us if we got sick. We finished the night by buying an expensive and very touristy dinner and then retiring to an inexpensive (but nice) hostel.

The plane ride into Luang Prabang was beautiful, even if I was constantly being correct by Sandy. “Wow, look at those palms!” I would say, only to get a reply in a thick Trini accent, “Dos a coconut trees.”

She then explained in detail where I had gone wrong in my assumptions. It had something to do with height and shape of the tree. She pointed it out later when were on the ground, but I’m still at a loss. 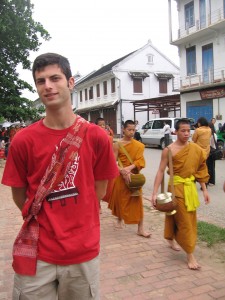 When I received my Lao PDR visa in my passport, I was both pleased and distraught to see that I only had one fully blank page remaining in my passport. Those full-page ordeals that a lot of countries are using will fill up a passport in a hurry. I have two from China (we had a group visa on our first trip and they didn’t even give me as much as a stamp), one from Russia (I quite like this one because it has my name in Cyrillic—when I first received it I exclaimed, “THEY SPELLED MY NAME WITH A ‘3!'”), and a work visa from Japan. In fact, Japan is taking up the better part of four pages in my passport because of my numerous departure and reentry stamps, along with a “landing permission” sticker and a half-page “multiple re-entry visa.” And now finally a full page visa from Laos.
I knew I would like Laos before I even passed customs. Several of the officers were playing solitaire on their computers instead of checking people’s papers. That evening we started off our adventure by climbing a mountain that was overlooking the city to enjoy the sunset and then enjoyed the local night market and a candle-lit dinner. Well, the dinner was not supposed to be candle-lit, but the power went out in the city for a solid three hours. Our tour guide told us that power outages were rare but I guess our definition of “rare” differed from his as there were several more throughout our stay (including the very next night).

The next day we went bike riding and I sent out a somewhat sentimental e-mail about my beloved Milwaukee Brewers (now 24-10 and 7 games up in their division!!!), but you knew that already.

Honestly, I would have been content to have biked around all-day, everyday of the trip.
In the next couple of days we visited several temples and the former palace of the king (before being overrun with communists). We also took a boat ride up the Mekong to visit a cave that had something like 4000 Buddha statuettes in it.
This is when the adventure became fun—we took a three-hour hike through the wilderness; dodging snakes, every insect known to man, and several leeches (which we thankfully found attached to our tennis shoes and not ourselves). At the end of the hike there was a large waterfall with refreshing, perhaps too refreshing, cold water in which we could have a swim. In situations such as this, I am reminded about how wonderful an invention the bikini is. But I digress…

That night we stayed in a guest house further down the river, had the subsequent day off, and on the next we went elephant riding. My elephant was a bit of a rebel—or grotesquely stupid, one of the two, I can’t figure out which. All the other elephants stayed in a nice, neat line while mine saw fit to take various alternate paths such as, say, through a tree. We finally limped our way back into town (about 15 km) with a 3-hour kayaking trip on the sloooooow River Nam Khan. On the day of our flight out we made one last excursion to a school in Luang Prabang. Some of the kids were from far away villiages and had to live in small, wood huts during the week. They arranged for us to teach an English class and the experience was great and much more rewarding than teaching in Japan. Many people might see the way English is taught throughout the world as a bad thing, but for these kids it offers a way out. Besides, it’s almost inevitable that SOME language would have to become the global language with the emergence of our ever “Flattening” world—we were just lucky in the fact that it is our native language. 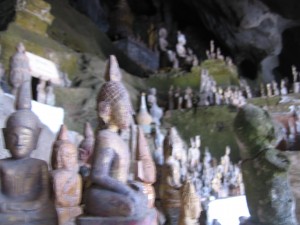 The trip was amazing, but it had to end and now I’m back in Japan. It’s amazing that I now see Japan as “boring” but I think a large part of that is because I live here—I’ve found that people always have an urge to dump on where they live. In Nagasaki the schools have been preparing for Sports Day which means that they have cancelled all classes from Tuesday afternoon on. The Japanese do not play sports, they work at them. Thankfully my school is just letting me work at my desk today (doing such all important things as writing long e-mails and working on my project). Yesterday my school asked me to wear “athletic clothes” so I could help the students prepare. So you can imagine my amazement when I asked how I could help and my supervisor replied, “You should come outside and watch…and think.” Yes, that was me yesterday…sitting on the sidelines thinking. My brain started to shutdown after about 15 minutes.

Let’s see…there was something else I was going to…OH! Yeah, I now have both a myspace and a facebook page. I am a big fat sell-out. For years and years I resisted. I would yell, “I’m not joining your internet cult!” Alas, I did. I still have a sneaking suspicion that everyone on myspace will be found dead, wearing black Nike tennis shoes, in a mass suicide about 20 years from now. Anyway, my info is:

Well, as always, I hope all is well back home (or wherever you are). Send lots o’ love.

[Editor’s note: While I maintain the opinion that a social networking site will be the downfall of humanity, clearly myspace was not up to the task. Also, this column dated itself severely by the inclusion of any myspace reference].