One Week in Nagasaki

I am going to do now what I was warned at orientation NOT to do. Write an e-mail in a grumpy mood. That being said, I have had a very good first couple of weeks in Japan so don’t read too much into this.

After having bugged my supervisor since my arrival that, yes, I would very much like to have internet in my apartment, I finally managed to have her take me to a store to get it hooked up! Before going I was instructed by a second-year JET, Hayden*, “Don’t take any of their shit, there’s no reason to wait two weeks for TV and internet, just insist that it gets done.” So, long story short-it will be another two weeks of maddening silence, cut off from the world, in the ol’ apartment. I keep telling myself, “at least you’re not in Mongolia” (no offense, Danny) but it still took every ounce of strength to not jump up and start strangling the salesman whilst screaming, “YOU TWIT! GIVE ME MY DAMNED INTERNET BEFORE I LOSE IT!”

Bleh, such is life in a bureaucracy-driven society.

ANYWAY, I have a lot to be thankful for: Nagasaki is a really cool city, everyone at my base school is very nice, all of the other JETs in the city are very cool, and my apartment building has a crab infestation**. 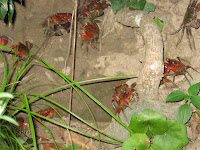 I had my big introduction to the student body yesterday, on Peace Day, during an assembly to commemorate the bombing of Nagasaki. We watched a two hour long movie (shot from the point of view of a Japanese girl from Hiroshima) on WWII, after which it was quite awkward to be the only American around for miles. Then, last night a bunch of JETs got together at the Peace Park and saw all the sites.

Today, we received the second group of JETs to our beloved city and I saw the same bewilderment that I must have had only a week ago yesterday. It gives me a lot of hope when I see how comfortable I have become after only a week. Well, I don’t want to seem like a complete slacker at work-so I’m going to go pretend to be busy offline. With any luck I’ll be able to send a much more detailed log here in a couple of weeks. Take care, and enjoy the American service industry!

*More on Hayden in our next installment.
**Yes, I have crabs, literally hundreds of them around my apartment.