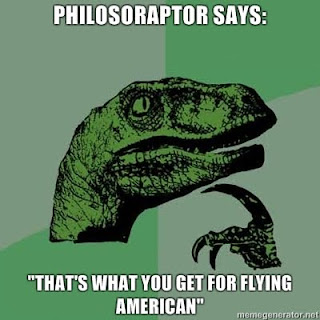 So, I’m sitting here in Narita Airport, Tokyo’s international airport, looking at the Korean Airlines flight that I should be on slowly push back from the gate. Although I should have had more than two hours to successfully make the change, American Airlines thought it would be a better idea to sit at the gate at Chicago O’Hare for more than an hour.

I was then left to stew for the next thirteen hours over whether I would make my connecting flight. Consciously I tried to tell myself “There’s nothing you can do about it now, just relax. Besides, there’s about 11 billionty flights between Tokyo and Seoul,” but it was always in the back of my mind. Thankfully, they had already booked me on an Asiana Air flight for later that evening. Although I had enough time to get to my original flight’s gate on time, the Japanese woman who had my new flight information explained, “We don’t have enough time to get your bags on the flight,” which I knew to be true.

I’m OK with this. Really. While I like flying, I love airports. I don’t know the exact reasons, part of it is certainly the excitement of a place wherein people are going all over the globe. There is more to it than that though; I think I like airports because they feel like “home.” I spent so much of my childhood running between parents, that the airport became a bit of a refuge–a place where I could have freedom from the continual tug-and-pull between parents.

While airports might differ from city to city, they’re all more-or-less the same. And yet, I still love just spending time at the airport, wandering aimlessly and clearing my mind before a flight. So, I’m going to enjoy my time in Narita. I would honestly rather have three hours of stress-free travel than a hurried hour to make a connection.