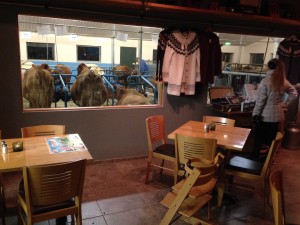 A restaurant or a dairy farm? Why not both!

There’s something fundamentally different about the way Vikings see the world. The Nordic people always rank among the happiest in the world, all landing squarely in the Top Ten in last year’s index, with Iceland, Sweden, Norway, and Denmark coming in at 9th, 5th, 2nd, and 1st, respectively. Perhaps it’s the high degree of social equality, the long summer days, or as Christine puts it, “low expectations.” Low expectations might sound pessimistic, but what I really think she means is an appreciation for the little pleasures in life. Whatever the reason, these Icelandic Vikings we met were happy, friendly, and justifiably proud of the culture they’ve carved out on this bit of the Mid-Atlantic Ridge.

I knew we were in for a unique adventure as soon as we boarded our Icelandair flight. The seats had all of the usual accoutrements–magazine, air sickness bag, duty-free shopping–but the air sickness bag had a lovely little message about the fresh air in Iceland, and there was an envelope where you could donate spare coins to a children’s charity. 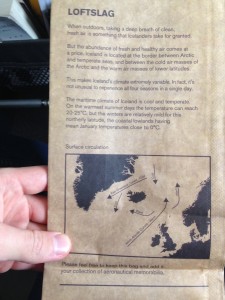 These quirky, nice little details didn’t stop on the flight, they pretty much continued the entire trip. From the outset, we found not one, but two signs en route to Reykjavik declaring first “The Village of Vikings” followed in quick succession by “The Village of Elves.” When we checked into our guesthouse, the manager gave us a personal tour of the establishment, proudly showing off his new coffee maker, telling us that there was no password for the wi-fi (listed helpfully as “Guest”), and reassuring us that there was nothing wrong with the hot water, it just smelled like sulfur because it was heated by volcanoes. Well, OK then.

Even on the open road, Iceland provides some unusual features. The main road around the island, Route 1, aka “The Ring Road,” is usually limited to two narrow lanes, one headed in each direction. But at regular intervals this road narrows further, to just one lane for both directions. Thankfully, there is so little traffic, that we only had to wait for another car at one of these junctions on one occasion. It’s also very difficult to drive there, and not just because of the high winds and inclement weather. No, it’s difficult to keep your eyes, and thus your car, on the road because of the constant breathtaking beauty around the island. A glacier here, a dramatic cliff there, and so it goes for every single mile all the way around the island. By the time we were finishing our loop, we were literally begging for mercy, “Stop it! You win Iceland.”

The Icelandic government, well aware of tourists like us who just want to stand around mouths agape, dumbfounded by the beauty of the island, have arranged a great number of picnic areas directly off of the Ring Road for viewing nature, driving breaks, and presumably eating. If a particular vista just couldn’t wait for one of the prearranged photo opportunities, we found the countryside desolate enough to be able to stop in the middle of the road to take pictures, all without having to stress about traffic coming from either direction. Sometimes, particularly when driving in eastern or northern Iceland, we would go upwards of 20 or 30 minutes without seeing another car. Mind you, this is on the busiest road in the country. 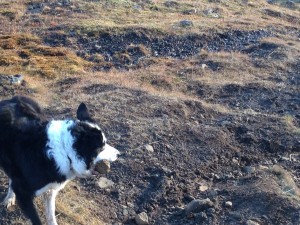 Seeing the country from the road wasn’t nearly enough, and we made sure to go on several hikes to better appreciate Iceland’s impressive scenery. Again, like on the road, we were often alone to take in the sights, with only our own conversation punctuating the sounds of rushing waterfalls and blustery wind. We were just as likely to see another person while hiking as we were to see a dog. Dogs greeted us several times along the way–always with their owners lagging far behind–and like their extremely friendly owners, these dogs were always ready to show their affection. One dog, a Border Collie who was easily five minutes ahead of his owner on the trail, approached us with his tail wagging and a large volcanic rock in its mouth. The dog duly dropped the rock at my feet and waited. In disbelief, I turned to Christine and said, “Do you think he wants to play fetch?” I picked up the rock and halfheartedly tossed it. The dog immediately pounced on it and brought it back. This process continued for several minutes until his owner finally arrived, and the dog–reluctant to leave his new playmate behind–followed.

Since we were traveling out of season, we often had to call the hotel managers on their cell to come open the doors, which they naturally did without complaint. The conversation, repeated several times throughout, went like this, “Hi, we’re going to be in the area tomorrow, can we have a room?”

“We’re not open, but just call me when you’re in the area, and I’ll come meet you.” During all of our stays outside of the Reykjavik area we were among the only guests there, if not the only ones. 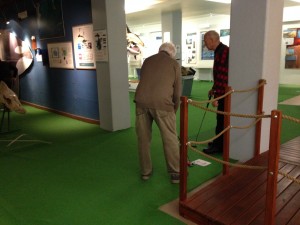 Due to one of these speculative calls, we wound up in the lovely little seaside town of Húsavík . Húsavík gained its notoriety from hunting whales, but now makes its money from whale watching. There can be no more telling example of this transformation than the excellent Húsavík Whale Museum, which resides in a converted whale slaughterhouse. The museum was very informative, making great use of visual aides, and its limited space. This smallish museum was able to keep us interested with its informative and compelling displays well past the 90-minute parking limit in the local lot. However, the most notable thing about the museum was how it had been converted into an indoor miniature golf course for the winter. Christine and I tried–and failed–to stay out of the way of these putting pensioners, but thankfully they only seemed mildly annoyed at our presence. 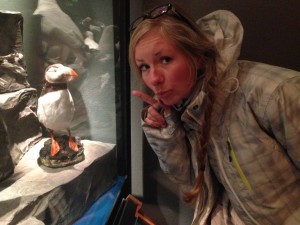 Sadly, this is the closest we got to seeing a puffin.

We visited two other museums along the way, both distinctive for their diminutive size and quirkiness. The first, the Mývatn Bird Museum, was limited to a single room filled with stuffed modern dinosaurs. In the summer, Mývatn is a bird-watchers’ paradise, but not in early November. A small pond in the middle of the room featured some prehistoric survivors, baseball sized balls of algae. The Japanese word for these, Marimo, or literally “algae balls,” can only be found in several lakes around the world: here in Mývatn, in a lake in Japan, and in Scotland and Estonia. Survivors from a different age, these Marimo rise to the surface to collect sunlight every morning, before sinking back to the lake bed at night. What they have to do with birds, I couldn’t say, and to see these green-brown balls resting at the bottom of the pond was anti-climatic to say the least. Although the Japanese word is a more accurate description, I quite prefer the Icelandic version, kuluskitur–literally “ball of shit.”

The third and final museum of our adventure, was one that we literally stumbled upon when walking about the streets of Reykjavik. There was a little glass box in the middle of the sidewalk, which allowed passers a glimpse of the subterranean remains of one of the first settlements in Iceland. It belonged to the museum 871 ± 2, named to be scientifically accurate given the dating of volcanic ash found within the building materials, putting the date of the first Icelandic settlement no later than 873 CE. Again, the museum was small, but very informative and well-arranged. The foundations of the settlement were well-preserved, as were many of the other artifacts found in and around the 9th Century home. Once inside the museum, I found myself looking up through the same glass box at modern-day Reykjavik, only to see two people looking back down at me. I did the only logical thing, I waved.

871 ± 2 was an excellent way to end our trip, giving us well-earned perspective and respect for the early settlers of this dynamic, often hostile, and decidedly quirky rock in the middle of the North Atlantic. Icelanders seem to cling to their traditions more strongly than most cultures, and after 1143 years (± 2) of surviving earthquakes, volcanoes, glaciers, high arctic winds, harsh winters, short summers, and the occasional polar bear, I understand why. It has worked well for them so far, so why change? It is my sincere hope that they never do.

Although the big things–glaciers, the northern lights, geysers, etc–might stand out more in our memories, it was the little, quirky things about this country that made the trip so enjoyable. 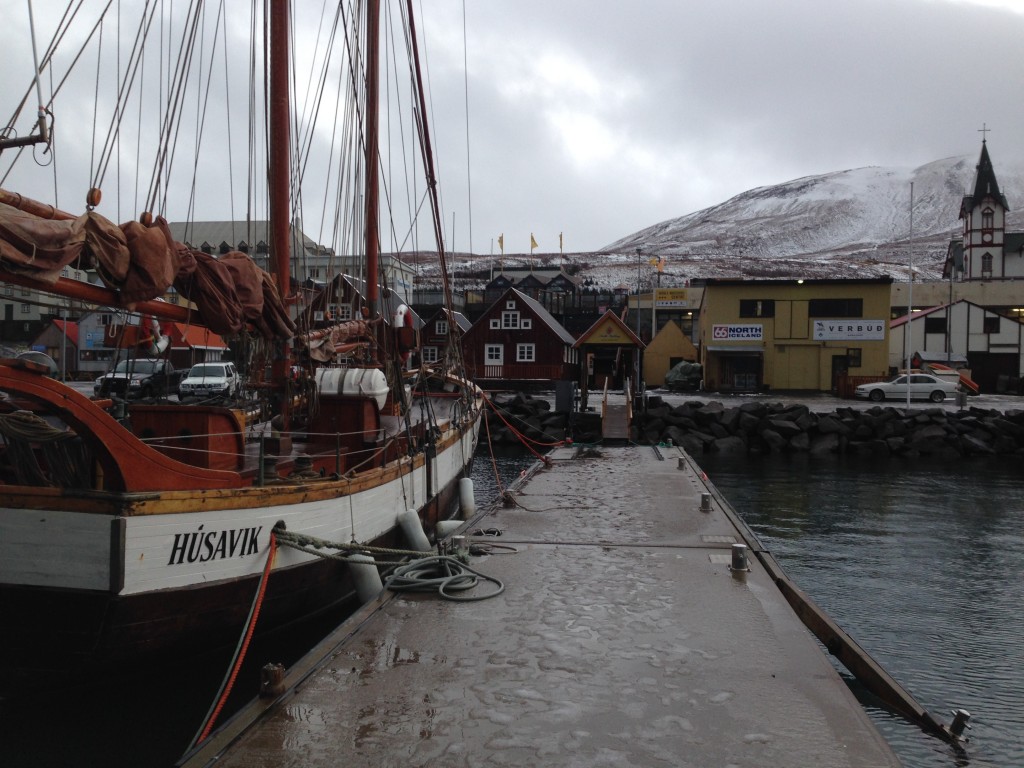