Authors Note: The idea of this series of posts came about during the usual mind-wanderings induced from a combination of a lack of caffeine and the blur that is my morning commute on the Munich public transit system. Between chapters in my book, I pause to people-watch, and occasionally even have larger insights to life in Munich, or humanity at large.

In particular, I had a moment when I arrived at my station when I briefly stood there in front of the doors, waiting for them to open. With a quick shake of my head, I realized I was not in Seoul anymore, these doors do not open automatically, and I needed to press the glowing little circle to let myself out, and I had better do it quickly as the locals behind me were getting restless. It’s a little difference, one that the average Bavarian wouldn’t notice, but seems strange to some outsiders.

From there, my mind started racing. What were other strange customs from the places I’ve called home? Had I ever lived in a normal place? What is normal? When I started to think about all of the places I’ve lived, they all seemed to have their own peculiarities. In a word, they’re all “Strange.” So, there only seems one appropriate place to start: The Beginning, 4:22 AM, December 21, 1982, Milwaukee, Wisconsin, USA.

I was born on a typical late-December day in Milwaukee, which is to say, cold and grey. Or rather, cold and black, given the time of day of my arrival. My grandma, noticing the date fell on the Sagittarius/Capricorn cusp, wondered aloud what my astrological sign would be. My dad, who had just driven to the hospital, past the landmark frozen custard joint Kopps, replied, “Caramel Cashew,” their flavor of the day. For those of you who’ve never had the divine pleasure of eating frozen custard (i.e. those of you from outside of Wisconsin), it’s a lot like ice cream, only several orders of magnitude better. Had I been capable of thought, perspective, or insight, this might have been my first clue that I my birthplace was a strange one, to say nothing of my family. 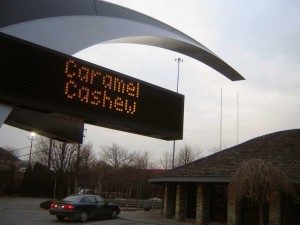 If there is a more overlooked city of equal or greater size in America, I’d like to know about it. And it’s a shame for the overlookers, because Milwaukee is one of the strangest places I know.

Some places are stuck in a particular decade, and Milwaukee is definitely a place stuck in the 80s. Classic rock stations clog the radio waves. It is more common to hear 80s tunes in bars and clubs than it is to hear most other genres/decades. The aforementioned 1982 Milwaukee Brewers are still talked about in hushed, revered tones. Fans of the Brew Crew still prefer to sport the royal blue and mustard yellow of the 80s teams, as opposed to the more modern navy blue and gold. And given the choice between the classic MB Glove logo, or the modern stylized M logo, fans mostly choose the former. Realizing this, while also realizing the potential to make more money, the Brewers routinely wear throwback uniforms throughout the season.

Even before the Brew Crew would define the city for the next few decades, a surprising move was made by one of Milwaukee’s industrial giants, Harley-Davidson Motor Company. In 1981 a group of thirteen local investors bought back Harley-Davidson from AMF, and were largely responsible for rebuilding the brand’s reputation, which had been fading for decades. Harley-Davidson had been spending a great deal of time, money, and effort trying to keep up with better, faster motorcycles from Japan. Under AMF’s ownership, they even tried some ill-advised gimmicks, such as the infamous “Confederate” model, released in the late 70s. 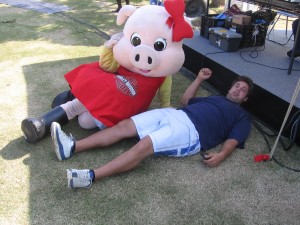 And whatever this is. Keep it real, Japan.

Under new management, Harley-Davidson turned its fortunes around, largely due to its decision to double-down on what they did best: making large, unresponsive, loud motorcycles. Today, Harley-Davidson is an iconic American symbol, one that is known world-wide, even for those who have never heard of Milwaukee. Indeed, one of the strangest days of my life was spent attending a Harley-Davidson festival in Nagasaki, Japan. The country that had driven the company to the brink, was now celebrating it with rock ‘n’ roll, and wiener dogs dressed in Harley jean jackets.

Now, all of this might be interesting, but it might not be considered “strange” to an outsider. So let’s talk about Milwaukee’s bar culture. Locals like to claim that Milwaukee has the most bars per capita in the U.S. The claim, might feel true, but according the U.S.A. Today, it’s “only” fifth on that list. Regardless, I’ve never been to a town with: A) So many bars, or B)  So many unique and fantastic drinking establishments. Or, to put it in my girlfriend’s terms while driving through the city early in the evening, “I’ve never seen so many bars! And they’re all full!”

Bar hopping in Milwaukee can take on a bit of a surreal feeling. One moment you can be enjoying a Pabst at the corner dive bar. The next, you can top off your micro-brew with a touch of sophistication at the Art Bar (which tries, and generally succeeds at bringing an art gallery into the bar). Suddenly, you find yourself far away from the chilly Wisconsin weather, drinking fruity cocktails at the Tiki bar, The Foundation. And if you can still walk after all that, you can do your best James Bond impression, and drink a martini at the spy-themed bar, The Safehouse (if you can remember the password).

I could go on. In fact, I think I will. You can drink away your hangover and watch your favorite English soccer teams play live at The Nomad. If soccer isn’t your thing, you can have your bloody Mary pretty much anywhere you please, though I would recommend the Wicked Hop, seeing as they try to serve you breakfast with all the random food they stick in the top of your drink. You can get in touch with Milwaukee’s German heritage and grab a liter of the best Bavarian beer this side of the Atlantic at The Old German Beer Hall. The options are seemingly limitless. 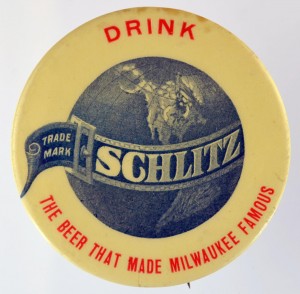 The slogan says it all!

This bar culture, in large part, probably stems from the one thing Milwaukee is known for: beer. In the late 19th and early 20th centuries, Milwaukee saw a large influx of German immigrants, and with Germans, came beer. Breweries sprung up throughout the city, including Miller, Schlitz, and Blatz. More recently, Sprecher and especially Lakefront breweries have been continuing this brewing tradition.

Lakefront Brewery is an especially fantastic story. They currently reside in an building that used to run the city’s long-defunct street cars. In the late 90s, the city was preparing to tear down the large,boxy,  brick building, but instead, sold it for $1 to a couple of brothers who were brewing beer out of their garage. Now, they’re selling more than 30,000 barrels a year, and it’s available in 38 states and 7 countries. Their guiding philosophy is, “Everyone should be able to enjoy a good beer,” and they went on to produce the first 100% organic beer in the U.S., the first 100% gluten-free beer in the U.S., and all of their beer is kosher. The Lakefront Brewery tour is also the only such tour I’ve ever been on that allows–if not encourages–the participants to drink throughout. It certainly beats a couple of small tastes at the end of the tour.

Milwaukee, far more than most places, lets its residents find their niches. The locally owned restaurants, bars, and coffee shops give a paradoxical collective sense of individualism, which you only truly appreciate when you leave the city’s confines, and find yourself at a Starbucks in suburbia. The laid-back “Whatever goes” attitude of most residents can almost be jarring to an outsider. People rarely wear more than a hoodie and jeans out to the bars, and those that do dress up are almost scoffed at. Who are they trying to impress? I once went out in a bathrobe and pajamas, simply because I had already undressed from the day, and didn’t feel like putting pants back on. No one batted an eye.

Of course, there are bad things about Milwaukee too. Latinos and blacks probably don’t hold Milwaukee to the same esteem as I do, seeing how the city is the most segregated in America. It’s a shame, because I think the city really sees itself as a mixing pot, having embraced large immigrant populations from Germany, Italy, Poland, and all across Europe. It’s extremely sad. Milwaukee for me was (and in my mind, still is) restricted to the “White” areas. When I lived there, I was adding to the problem of segregation without even knowing it. Perhaps the strangest part of this city that I called home for nine years of my life, is how little I actually know it.

Regardless, I do look back at my times in Milwaukee (those I can remember, at least) with fondness. Perhaps if Milwaukee were less cold, I could see myself returning there for more than a visit. That said, I’ve never seen a city transform as quickly and enthusiastically as Milwaukee does at the first hint of summer. And the summers are glorious; good enough to leave you actually aching to go to a Brewers game, regardless of how bad they often are. When outsiders ask how you can spend so much of the year in such a cold climate, the standard Milwaukeean response is, “But the summers are great.”

I spent a great deal of my formative years there, and I still generally root for Wisconsin teams. I took with me the “To each their own” laid-back aspect of Milwaukee culture, one that made adjusting to life in the South, particularly as a non-Christian, all the more difficult.

And one of these days, I’ll actually try Caramel Cashew frozen custard.

The Strange Places I’ve Called Home series will continue with the next installment: South Florida.