Coming to the Conclusion 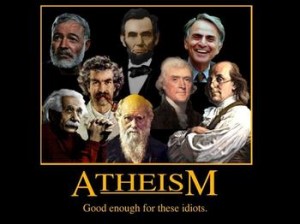 This is the first of a two-part post. In this post, I will be discussing how I came to self-identify as an atheist.

About a year ago I was sitting in a pub in downtown Seoul at a couchsurfing event. I had had a few Jack and Cokes when the conversation turned to religion. After I “came out” to him as an atheist, he paused and I knew exactly what question he was about to ask. “So,” he paused for a moment, and I could almost see the social calculations being completed before he waded forward, “You really believe that all of this is just an accident?”

I smiled as I raised my whiskey and replied, “I’ve not heard a more compelling argument yet.”

Of course, we’re not here “by accident.” There are mechanisms at work in the cosmos and on Earth which makes “all of this” very non-random indeed. Some of those mechanisms, such as evolution, are well understood. Others, such as the birth of life or what made the Big Bang go bang are still mysteries. However, these mysteries do not make a deity more likely, but merely represent a gap in our current understanding. Were I to put my money on whether science or religion would be the first to find the answer to these mysteries, I would surely bet on science many times over.

The idea for this piece has been circulating through the currents of my mind for several months now. I think I’m finally ready to put it all out there. In part, I’ve been inspired by Richard Dawkins’s “Out” campaign. With the recent death of another iconic atheist, Christopher Hitchens, the time just seemed right. With the loss of such a strong voice, it is important for the rest of us to pick up the slack, best we can, and speak truth to power. Despite all of our scientific breakthroughs and the widespread availability of knowledge, we still live in an era of pseudoscience, superstition, and faith. To continue to progress as a species, I feel that we need to drop some of our closest held beliefs when evidence to the contrary arises.

Atheism is as misunderstood as it is feared. It is not a thing, but is merely the absence of theology and faith. I’ve always had a curious and scientific mind, and at the end of the day, the empirical evidence that science brings to bear is the only way that I can make sense of the universe around me.

In this post, I will attempt to give my story: how it is that I came to my lack-of-belief. In addition, I’ll try to inform the reader why it is so important to me to write this piece. If the reader is easily offended, or unwilling to keep an open mind, perhaps this is a good spot to stop reading.

Growing up Jewish in a Christian World

As a child, I just accepted the idea of God, the same way that most children accept the idea of Santa Claus or the Tooth Fairy. I grew out of all three, but the deity took much longer.

Usually, childhood indoctrination leads to a lifelong and unquestioning belief in their parents’ religion, though sometimes, it does the exact opposite. I was lucky in the fact that I had little, if any, indoctrination. Yes, I went to Sunday school and learned the stories of the Torah, but those stories were always tempered by my parents’ assurances that they were merely stories–moral lessons on how to live.

We are reform, very reform, Jews. We don’t keep kosher, and many of us are either agnostic or atheist. If ever the term “Culturally Jewish” could be applied, it would be appropriate for my family. I certainly identified myself as Jewish, and in fact, still do.

It was my family, grandparents on down, that always respected the institutions of science and education. We also respected healthy debate. The debate usually centered around political matters of the day, not science or religion, but it taught me the importance of intellectual honesty, how to make strong and persuasive arguments based on facts, and when it is appropriate to question flawed logic or reasoning.

Even with a mostly secular upbringing, the identity was ingrained into the fabric of my being: I was a Jew. As social creatures we desire to fit in and share similarities with those around us, but I was disturbingly different. I hadn’t asked for this difference, and yet I couldn’t understand why a vast majority of my classmates were not Jewish. Why was I different? 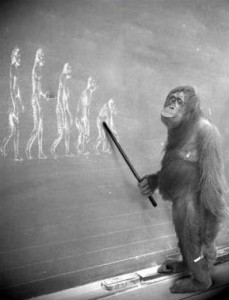 One event in particular had a profound impact on my development. I must have been in 5th or 6th grade when my dad and stepmom went away on a business trip. I was left in the care of a very religious woman. For one of my school assignments I had to read a book about human evolution; when the babysitter saw this book, she scoffed, and said something to the effect of, “You don’t really believe in that do you?”

Even at a young age, I was amazed by this woman’s stupidity. I looked at the fossils provided in the book and the wonderful narrative of humanity that it created, and wondered how anyone could possibly question the overwhelming amount of evidence?

The following Sunday, she took me to her Baptist church against my hysterical objections. I had never been to a Baptist service, and have not been again since. At the church, I was told how I was going to hell to suffer eternal damnation, simply for being born into the wrong religion. Even then it seemed absurd to me that a supposedly loving god would be so arbitrary. Why create humans in different religions and denominations only to condemn the vast majority of them? Besides, any church that took such an adamant stance against science was not one that I would ever be interested in joining. This incident would be my first of many run-ins with creationists–particularly of the Baptist variety.

In 8th grade, I moved from the relatively liberal and open-minded state of Wisconsin, to the much more conservative and religious state of Tennessee. I grew to love the state, but high school was especially difficult there. I was constantly harassed by both bigots and well-meaning (although misguided) individuals alike.

To many, my faith was not just a quirk of birth, but a conscious rejection of their lord and savior. After enough harassment and some physical confrontations, I had seen enough of their god to consciously reject him. I’m sure that many Christians would point to these incidents and would remark something along the lines of, “Well, they were not really practicing Christ’s message” or “They must have not been real Christians.”

But they were. Differing opinions from those that were so thoroughly implanted could not be tolerated. They were just children, and the same way that children will latch onto their parents’ favorite sports teams, they latched onto the faith of their fathers. They were mostly Southern Baptists–an extreme denomination to begin with–and the core principles were distilled through the parents to the children. I’m sure the parents were trying to raise good sons and daughters and to ensure their salvation, but instead they created little zealots.

After a couple of years of this, I began thinking long and hard about my own religion. Of all the questions I was asked about Judaism, the most difficult to answer was the one of what happened after death. I had not been raised fearing an eternity of fire and brimstone, so I would often just say, “I don’t know, we rot, I guess.” It seemed logical enough, but it was never satisfactory to someone who had been promised an eternity of salvation.

I didn’t hear the word “agnostic” until I was 17 years old. Although I thought like an agnostic, it took me a few years to self-identify as one. Like atheism, agnosticism is also highly misunderstood. It is the belief that the idea of god is both unknown and unknowable, and in this regard, I am still agnostic. Some see agnosticism as people “hedging their bets” or “50/50” when it is no such thing. Dawkins likes to use a 7-point scale for describing one’s religiosity, with 1 being absolutely certain of the existence of a creator and 7 being absolutely certain that there is no god. Most atheists never get to 7, but are merely agnostics and atheists by default. Dawkins himself acknowledges this, and says he’s merely a 6.8 or 6.9. That’s probably where I’m at as well.

Throughout high school and college, I didn’t think about religion much. Two specific memories stand-out as the exceptions. The first was when I was 20 and decided to go to a Yom Kippur service at the synagogue near the University of Tennessee campus. I had forgotten most of the prayers since I had last been to temple, and it just didn’t feel right. The second came after a fight with my then-girlfriend Chelsee; it would be the last time that I attempted prayer.

Before I left for Japan, I read two books by Michael Shermer which would help to alter my perceptions about religion, and also give me courage to be comfortable as an atheist. The first book was Why People Believe Weird Things which explored such topics as the aforementioned creationism, U.F.O. sightings, and Holocaust denial. Although these things are easily and justifiably tossed aside by scientists and historians, I had never seen them so thoroughly destroyed by scientific facts. It is easy to write off unproven nonsense as precisely that, or as Hitchens so cleverly put it, “That which can be asserted without evidence, can be dismissed without evidence.” However, in a world where pseudoscience and superstition spreads faster than ever via the Internet, we need to stand vigil against the forces of unreason and speak-out against them.

The second book I read by Shermer was The Science of Good and Evil, wherein Shermer explains how our morals, for better or worse, were in fact evolved behavioral traits to help us survive as a species. It remains the most persuasive argument I’ve heard for the question of morality. A central theme in this book focuses on the in-group/out-group dichotomy of human nature. Essentially, we have differing morals for how to treat those in our in-group (families, clans, or even nations) to those outside our in-group. We even see this codified in the Bible and other holy books where it is permissible to rape, murder, and enslave outsiders.

In conjunction, these books helped me to overcome the fear of letting go of religion. I thought about the irrational arguments made in support of holistic medicine or Holocaust denial and I couldn’t help but apply those to God. I forced myself to think more rationally and scientifically about all facets of my life. It helped me shed some of my silly beliefs and superstitions, and in the end, there was no justification for belief in a deity of any kind.

For many years I still considered myself agnostic, but that wasn’t being 100% accurate. I didn’t believe in God and I was sans religion. I was an atheist by default. I still am.

In the second part, I will delve into what I find so unbelievable about God and why I find the ideas of God and science incompatible. In the third, I discuss why coming out as an atheist is so important.