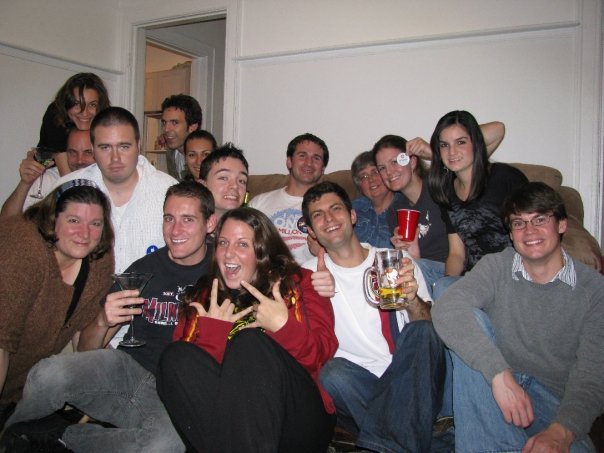 Couchsurfing party on a much more hopeful election night in 2008.

I’m writing this in the wake of the United Kingdom’s referendum to leave the European Union. No one really knows the full implications of what this means for the future of Britain, the EU, or the global economy. The one thing that we can agree on is that this decision was widely influenced by the rising tide of nationalism, both in Britain and in other Western democracies. People are scared, and their deepest fears and prejudices are getting the best of them, no doubt with a generous assist from various media outlets. So we try to build walls, either with brick and mortar or through government red tape, to preserve a national ideal that never really existed.

Britain wished to return to an era with greater national sovereignty, and in the process of doing so only complicated matters for the average Briton, and made the European free trade zone just as undemocratic as the proponents of “Brexit” insisted that it was. The EU will still impose its rules and regulations to products entering its borders, and Britain will still have to pay to gain access to it, but now they will no longer have representatives in Brussels to argue for their best interests.

Indeed, it is a sad end to what has been a frustrating debate, but hopefully other nations can learn from the UK’s mistake. So how did we get to this point, where faith in our institutions has so thoroughly broken down?

My answer to this question is a simple lack of trust. Despite living in the most peaceful and prosperous era of human history or prehistory, we are told by friends, family, coworkers, the media, and politicians that we cannot trust strangers. We cannot trust them at home, and we absolutely cannot trust them abroad.

At one point in my life, I believed these voices. Stay at home. Lock your doors. Don’t talk to strangers. And then something happened: I traveled a bit. I spent a year living abroad in Japan. Suddenly, I was the foreigner. Suddenly people looked at me with suspicion. Suddenly I was relying on strangers for help. When I returned home and I started looking at my next adventure, the idea of couchsurfing–staying on a stranger’s couch for free–didn’t sound as crazy as it might have otherwise. And after that first couchsurfing experience in Leeds, England, I was hooked. I wanted to meet new, and adventurous people. I wanted to see my hometown through their eyes, and see their hometowns like a local. After all of those experiences–hosting over 70 surfers, and being hosted 10 or so times myself–I came to realize a couple of important rules that no one tells you about humanity:

The first point is one that really caught me by surprise. When people ask me about couchsurfing, the first question I usually get is about horror stories. They’re always a bit disheartened when I tell them I really don’t have any. I have plenty of weird stories, don’t get me wrong. I’ve hosted couchsurfers who’ve reeked of patchouli, who were creationists and 9/11 truthers, and one particularly annoying one who took advantage of a free ride from Milwaukee to Knoxville. And I stayed with one couchsurfer who was overly fond of snakes and martial arts (either separately or together, that bit was unclear). But none of them were bad or dangerous people, we just didn’t become best friends forever.

I’d just like to re-iterate my first statement, “Most people.” A small fraction of people really do want the world to burn, though even most of these folks see themselves as fulfilling their spiritual or philosophical destiny (and some are just raging psychopaths). But it is a minority. No one sees themselves as the villain of their own story, and we must do better of recognizing that fact. Far too often we end up turning on each other for simply having differing views of how the world should work. Political polarization is higher than it has been in decades, and the other side isn’t just wrong but evil and unpatriotic. These feelings bleed into our personal lives, causing fear of and anger toward everyone from passing acquaintances to long-time friends and family. Instead of having a reasonable fear for a small minority of the population, society has led us to believe we need an irrational fear of a majority of the population.

It’s one thing to rationally think, “most people are OK,” it’s another to first afford them a bit of trust. After each couchsurfing experience, I would go on and rate the experience online. When it came to the issue of trust, I almost inevitably selected, “I generally trust this person.” I was never given a reason to report otherwise. Because I opened up my mind just a little bit to new possibilities, set aside my fears, and trusted a stranger to come into my home, a world of possibility arose. I met some of my best friends through the site. I had some of my most interesting travel experiences with hosts. And I even met my future wife.

When I wasn’t meeting future best friends and spouses, I was gaining first hand knowledge of cultures, experiences, customs, and traditions. I was learning about the wider world vicariously through my guests, hosts, and couchsurfing friends. I learned about cultures and countries that I had never been to, nor planned on visiting. I gained a level of understanding about their cultures, and an introspection into my own. This in turn created a positive feedback loop, where I learned through experience that most people are mostly good most of the time, and that I could trust them. By trusting them, I allowed myself to accept more people into my home, and in some cases, into my heart.

I understand the fear of the unknown, and of this globalized world in which we’re now living. But nationalism and isolationism are not the answers. Unless we all want to start living like North Koreans, the forces of globalization and multiculturalism are here to stay. Britain leaving the EU won’t change that. We can either work with other nations to ensure we continue to have a peaceful and prosperous world, or we can erect walls and walk the well-worn path of fear, anger, hatred, and war. My hope is that Brexit ends up being an expensive, cautionary tale, and we can go back to trying to expand the all-important freedoms of goods, services, and people. All it takes is a little bit of trust. If we can do it on a small scale with a website, a couch, and a couple of beers, maybe we can do it on a larger scale with just a little bit more effort.