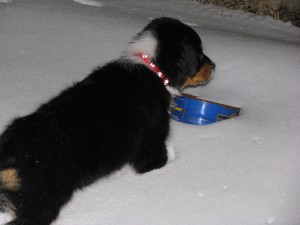 8-week-old Syd in the snow (which is far too deep for her)!

Sydney, my Australian Shepherd pup, and I agree on a great number of things: enjoying a nice long walk, curling up on the couch to watch a movie, and the shared mutual benefit of having one of us enjoy eating spilled food off the ground. However, we have a major disagreement over the issue of snow. To her, running through the snow is the greatest of joys, and I would much rather she finish her business and hurry back to the warm indoors.

For the last two days I’ve looked out my window in northern Munich with a forlorn gaze, only to see a light, but steady, snowfall. For two days, she has taken great joy in extending our frigid walks as long as humanly (or caninely) possible. Oddly enough, it was a day very similar today in Milwaukee, Wisconsin, that I first brought her home over four years ago. The snowfall had been intense that winter, and the accumulation reached up to my knees in my yard. This was no place to potty-train an 8-week-old puppy, but I made do by clearing out a small patch of grass for her.

Even in Wisconsin, the winter eventually gave way to spring, spring to summer, and my dog was growing up before my eyes. She is the cause of great joy and love, and a great deal of frustration. I couldn’t have known then, but having her around as a responsibility would create complications going forward in life.

She was one-and-a-half years old in the summer of 2010 when I began thinking of taking my life in a radical new direction. I had reached a point in my life where I was tired of the constant struggle. I needed to make a change to get out of the cycle of part-time jobs and unemployment, and the change presented itself with a job offer in Seoul, Korea. With some quick research, I was amazed to discover that I could bring her into the country with ease, and within a month we were on our way. 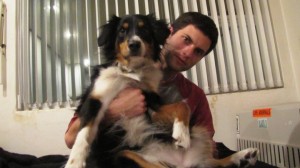 Me and Sydney in my small, Seoul apartment.

To bring her into the country, she only needed to be under a certain weight, and a letter from my vet saying she was in good health and up to date on her vaccinations. After an 11-hour flight from Seattle, we made our way to customs, showed the letter from my vet to a friendly Korean woman, and she immediately pointed to the bottom of the page and said, “Problem.” The woman explained that the letter needed to be signed by hand, and that the electronic signature just wouldn’t do. A few tense seconds passed, and she sighed and said, “Next time, sign please.” Yes, I’ll be sure to remember that next time I’m bringing a dog into the Republic of Korea. With that, we were free to pass through the sliding glass doors, and into the rest of the country beyond.

This may be difficult to believe for a country famous for eating dogs, but Korea, and especially my first job, were not great for my little world traveler. Koreans prefer their dogs small enough to easily fit into a purse, so when we walked down the streets of Seoul, most gave us a very wide berth. I tried my best to give her long walks in the morning and at night, but the long 12-hour days took a tool on both of us. When I made my move to English Village, life improved drastically for both of us. English Village, and the surrounding area in Paju, were a far cry from the endless high-rise apartments seen around the majority of Korean urban centers. It was perhaps the most un-Korean part of Korea, but it was a little slice of heaven for us. Dogs need space and greenery, and Seoul is short on both.

I needed my health certificate to be a bit more official upon returning to the U.S. I had to take a cab with her to nearby Ilsan to get the necessary paperwork from a vet that specializes in such matters. The form, which I must add contained numerous errors, was signed and stamped and ready for inspection by U.S. customs. And as it turns out, this was all completely unnecessary. When I was greeted by customs in Detroit, the man asked if I had the necessary paperwork. I told him I did, and started reaching in my bag for the folder when he stopped me. “I don’t need to see it.” OK. He then proceeded to pet Sydney and welcomed us both to the U.S. At this point, I would like to strongly encourage any Homeland Security personnel to take notes on how to treat passengers.

When it came time to move to Germany a few weeks ago, there was no doubt that Sydney was coming right along with me. I would not expect Germany to be as relaxed about paperwork as either Korea or the U.S. Stereotypes exist for a reason, and the German government did not disappoint. This time, I needed to have her microchipped and re-vaccinated against rabies, despite the fact that her current vaccination did not expire for another six months. Then, I needed to have a six-page health certificate filled out by my vet and sent to the local USDA office to be verified. The paperwork all needed to be done within 10 days of departure. I now suspect that Fed Ex has some sort of deal worked out with the German government.

I received her paperwork with two whole days to spare. I hoped that the paperwork would be an easy ticket through customs, but I was certainly wrong about that. It took a nerve-racking twenty minutes, with the armed customs officers thoroughly examining the papers, asking questions, and calling superiors, until finally letting us through. 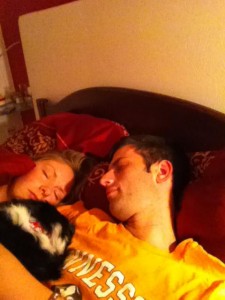 Our little family, together in Germany.

Now we’re here, and life is more or less back to normal. Germany isn’t a good place to raise a dog, but a great one. There are dogs–big ones!–everywhere, and tons of green spaces to let her run and play. Or rather, there would be green spaces, were they not blanketed with cold white stuff.

I often think back to when I first got her. If I had known that I would be living in Korea and then Germany, would I have taken on the extra burden? I hate to think about that choice, since having her around has given my life great fulfillment, so much so, that I struggle to remember life before her. I think back to trips I took in college, briefly wonder what I did with Syd, and then quickly recall that, sadly, she was not yet in my life. Sure, she has created complications, but those are relatively short-lived, unlike the joy she creates in my life, which is constant and daily.

← Knoxville Couchsurfers: Finding My Way Back Home
A Win for Rational Thought: The Fight Over Marriage Equality →

2 comments for “Dog is My Co-Pilot”