Just over two years ago, I met my first real friend in Korea, a couchsurfer from England, Mark. We first contacted each other through the Seoul couchsurfing message board, and shortly thereafter met up in Hongdae for drinks and random shenanigans. We met outside of exit #9 (or exit #5 as it was known at the time); he was wearing an instantly recognizable shirt that read, “Got Couch?” This certainly cut down on that awkward moment at couchsurfing meet-ups where surfers find themselves asking awkwardly around the room, “Um, are you here for the CS event?”

His shirt was especially helpful since I had been unable to see his face when reading through his profile. His picture, same then as it is now, is quite the provocative (and ironic)* image of his face firmly planted in the large, fake, bikini-clad breasts of a San Diego stripper**. Under the picture, in his “Personal Description” section, he wrote, “If you laughed at my profile picture, me and you shall get on good. If you laughed, and wondered if those boobs are real, we shall definitely get on well! If you didn’t laugh, then just humour me anyway.” I had both laughed and wondered if the breasts in question were real. And yes, we have got on well ever since.

I like to joke that couchsurfing is a bit of cult, albeit a friendly, mostly harmless one. Well, like any cult, we need members on the street, preaching the benefits of life in the Sofasphere, and Mark is the biggest couchsurfing evangelist I know. He is constantly on the lookout for new members, and will happily tell them at length about the wonderful world of couchsurfing. His profile name on Facebook is “Couchsurfing Mark.”

I tend to be pretty selective about who I tell about couchsurfing. It’s a special community to me, and I don’t think it’s for everyone. Mark is far more inclusive than I, and I’ve had to hear him give his best CS pitch numerous times at length. He’s converted many of our friends, although from there, he makes them earn it. A mutual friend, one of Mark’s converts, once sent a message asking me to vouch for him, but when I checked out his profile, it was nearly completely bare. I wasn’t about to vouch for a blank profile, so I politely declined. When I told Mark about our friend about it, he said, “Yeah, he asked me too, I told him to fuck off.” 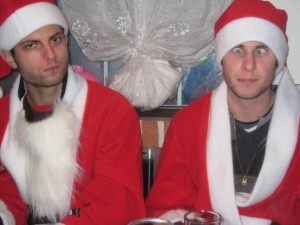 Yesterday marked the end of an era for Mark and me in Korea. Although the sad reality of leaving my friend was never far from the forefront of my mind, we made the best of it. We started in Itaewon, made our way up to the base of Namsan Tower, down the mountain, and to Hongdae via Seoul Station with (quite a few beers along the way).

Once in Hongdae, Mark had the great idea to hop a fence, and climb onto the roof of a building overlooking the park. We sat on the roof, legs dangling precariously over the ledge, and enjoyed another cold beer. Below us, college-aged Koreans and the occasional foreigner came and went. About once every 15 minutes, some Korean girls would spot us, and ask how we managed to get on the roof. Mark simply replied, “Spiderman” while making an appropriate wall-climbing gesture.

From our perch, we watched as people gathered around a display of candles which were laid out to resemble a path leading to a large heart in the center of the square. After about an hour, a couple appeared and the man lead his girlfriend up the candle-lit path, into the heart, dropped to one knee, and proposed. Our vantage point was perfect, and we loudly cheered the couple on with the crowd.

Eventually, more friends showed up, and we climbed down off of our perch without incident. From there, it was galbi, soju, and beer. Sadly, I could not stay out longer. I had been away from my dog all day, and needed to get back home. As fate would have it, we walked past exit #9 of Hongdae Station. We would say our goodbyes mere feet away from where we had first met two years ago. In that time, we’ve grown and faced the struggles that come from a life abroad. We’ve shared some great memories, and I have a feeling that I’ll be seeing more of Couchsurfing Mark down the road.

*The image is ironic for reasons which shan’t be discussed here.

**This profile picture has gained quite the reputation around the community. Apparently the San Diego group of couchsurfers tried (unsuccessfully) to get this picture removed from Mark’s profile. They argued that it reflected poorly on San Diego, though personally, I cannot think of a better advertisement for visiting the city.   One of the CS higher-ups asked Mark to remove the picture, citing its offensive potential, but the picture remains. To cut down on confused couchsurfers mistaking him for the girl, he has since added a giant green arrow pointing to him, with the caption, “This is me.”

← There Will Be Blood: Playing Soccer on Dirt
New York, New York →

3 comments for “The Gospel of Mark”