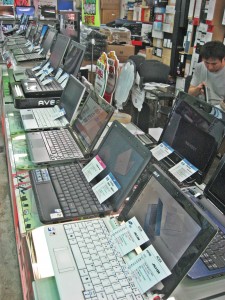 When shopping for a new shiny gadget in Seoul, the prudent resident can forget about going to the gleaming new halls of the closest mall, and head straight for Yongsan Station instead.

Yongsan has long been the de facto hub for electronics in Seoul. It’s a place where the intrepid consumer can buy the newest toys, and then bargain with the charismatic merchants for a better deal. It has evolved into, essentially, a bazaar of electronic devices.

I wasn’t quite prepared the first time I went to Yongsan to get my notebook computer for my India trip. I found a computer that I was perfectly happy with, for a price that was within my budget. Unfortunately, in a move of supreme stupidity, I somehow left my bank card sitting on my desk at home. No computer for me that day. Instead, I had agreed to meet back with the same merchant the next night, card in tow.

Naturally, when I returned on this trip, he was nowhere to be found, and not answering the number that he had given me. But I was determined (admittedly, a horrible state of mind in which to be shopping for inherently expensive goods). I came across another booth, with another computer, with roughly the same specs as before. Unlike the last guy, I could not move this guy off the asking price, and wound up paying slightly more.

To add insult, after fidgeting with the notebook for about 20 minutes, he told me he could not install the extra RAM and memory I had negotiated for. Instead he handed me the notebook and the memory card, wrapped in tin foil, to take to the Sony store to get it sorted out. The money had already been exchanged, so I took both with a heavy sigh, and returned home. Yongsan had won, this time.

Fast forward about 5 months, and the memory card was still sitting on my bookshelf, still wrapped in tin foil, and at this point, topped with a layer of dust. The notebook worked just fine, but dammit, I had paid for that extra RAM and memory, I wanted to use it. And if not use it, at least have it. Besides, my large laptop needed a new battery, and my ipod had crapped out, thus necessitating a new one. I certainly wouldn’t get as good of a deal on a new battery in the States, and I certainly wasn’t going to be sitting on a Peruvian bus for a full day without some tunes.

So I threw both laptops in to my backpack, and headed to Yongsan with my friend and co-worker, Abby. I found the same guys working in the same stall as before. In broken Konglish, I tried to explain to them how upset I was about the whole memory card thing, and they in turn, explained in broken Konglish that they really couldn’t do much about it. Then, because I was still feeling righteously indignant, complained to them that they had only given me the trial version of Microsoft Office, instead of a (almost certainly bootlegged) version that I could actually use. I saw I was getting nowhere with all of this, and instead asked them for a replacement battery for my laptop, and headed downstairs to the ATM.

Downstairs, en route to the ATM, like a beacon drawing me in through the dense forest, I saw a Sony store. The men upstairs had told me with some confidence that Sony was only open on weekdays, and certainly not open directly below their feet. I showed the man my notebook and proffered the memory card to him. He quickly went to work, opening up the notebook with, get this! a new piece of technology known as a “screwdriver.” I guess this new device was unknown to the guys upstairs (who I was rapidly beginning to dislike at this point). Within seconds, he was pulling out the old memory card, and then he noticed something; the  idiots upstairs had given me a card that wouldn’t even fit into my computer. I took both cards in my hand, asked him to wait for a moment, and ran back upstairs to try to get these morons to actually give me the right card.

At first, the merchant tried to tell me that this card was “service,” you know, just part of the deal. Then, I decided to go nuclear, I demanded refund. Instantly, they suddenly discovered this “screwdriver” device and set about cracking open nearly every computer they had in their inventory, trying to find a card that would work for me. Finally, after nearly half an hour, they managed to find one, and just like that, the computer I had paid for was working, my laptop had a new battery, and I even got them to install (a bootlegged version of) Microsoft Office for me.

On the way out, I got a new ipod, my mission to Yongsan was a big success. Not bad for a self-proclaimed technophobe.

← Religion and Politics
North Korea: Peering into the Darkness →