One of my unexpected duties in India as the “guy,” was to chase down any unwanted critters from our hotel. And since this was India, this turned into a somewhat regular occurrence. Generally, I preferred not having to kill the unwanted guests, as was the case with a mouse that had wandered into our bathroom in Khajuraho.

Though sometimes, these vermin had to die. Such was the case with a particularly fast (and large) centipede that jetted across our floor. My general philosophy about animals is this: the more legs it has, the more it probably needs to die. Naturally, centipedes are right at the top of that list. Just thinking about them gives me the creeps. Next down the list are spiders, the vast majority of which need to meet the underside of a boot. Also, is there anything worse than walking through a spider web? Most insects I don’t mind, but I will go well out of my way to swat a mosquito. 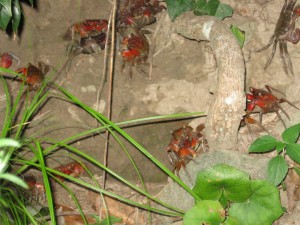 The one notable exception to my “legs rule” are crabs. Most people don’t have to worry about crabs as a pest control issue, but for one year in Nagasaki, Japan, I certainly did. No one warned me about the crab problem at my apartment before I moved in, but it didn’t take long to figure it out. I distinctly remember hearing the sound of a crab scurrying behind my building for the first time on my first morning in Nagasaki. I thought I was just jet-lagged and imagining things. When I returned home in the evening, I heard the same sound, only this time I followed the sound around the back of my apartment building,  and I was greeted by literally hundreds of crabs. It was a shocking sight at first, but they eventually became a welcome addition to my strange little Japanese home. They left me alone, if only for a justifiable fear of becoming my dinner.

Unfortunately, the crabs didn’t keep away the real pests of my Japanese life–the massive hair spiders. On several occasions these palm-sized arachnids saw my apartment as a great place to do their spidery activities. Each time, I had to find something suitable with which to squash this abomination. I retired from Japan with an undefeated record against these horrific-looking spiders. I’ve not returned for fear of losing this record.

Korea has been mostly mundane in comparison to either Japan or India, but that all changed about two weeks ago. I was coming home late from work (thanks to our new mandatory overtime policy), when I saw a small, but rather scary black snake in the entrance to my apartment building. OK, so I guess here’s another exception to my “legs rule.” I’m not a fan of snakes, but I certainly wasn’t going to kill this guy (or gal). Instead, I grabbed a broom, shooed it out the door. Then, with a powerful sweeping motion, I sent it flying into the bushes and I was rewarded with a very satisfying “thud.” I hope snakes have pretty short memories, and it hasn’t been plotting its revenge.

Then, last night, also at the end of a 12-hour shift, my students were enthralled by a bug. This isn’t unusual, as our students are generally enthralled by anything but what we are trying to get them to do at that very moment. However, this centipede (dammit, why did it have to be a centipede?) was a creepy crawler unlike any I had ever seen. It was thick, black with red spikes, and about two-thirds as long as my foot. So, with the kids watching, I stepped on it. Instead of a nice crunching sound, nothing happened. I picked my foot up, and the centipede carried on its business, pausing only briefly to laugh at my puny effort. It didn’t even appear to be injured from having 150 pounds dropped on it. Naturally, I tried again, this time with a bit more effort, but the exact same result. As my grandpa would say, “This thing was built like a brick shithouse.” I spotted a fire extinguisher a few feet away, and decided this centipede from hell needed to die immediately, and then proceeded to smash the bug with the extinguisher no less than half a dozen times before it finally perished.

Honestly, I’m still baffled that Satan’s centipede didn’t die on first (or second) stomp. However, it was great practice for my upcoming trip to South America, where I will once again be the guy, and de facto pest control. Perhaps I’m going to need some better boots.

← Dating in Korea
What are the odds? →