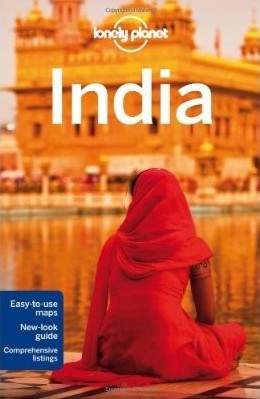 You got me again, Lonely Planet.

I didn’t want to break-down and purchase the India Lonely Planet. Really, I didn’t. Yet, the sizable tome–one that I’m sure could be used as a lethal object in case of emergency–sits on my desk. Post-it notes have been carefully affixed for easy reference, and orange highlighter denotes sites and hotels of particular interest.

Anger:
Shortly after booking the flight for my trip, I wandered down to What the Book?–the English language bookstore in Seoul. I was in good spirits, as today was the day I was picking up the Lonely Planet for my adventure. I would begin planning my trip immediately! I picked up the hefty book, flipped it over, and saw the jaw-dropping asking price of ₩38,390, or approximately $34. One or more profanities might have escaped my lips at this point. I vowed not to pay their absurd price, put the book back on the shelf in disgust, and walked out the door.

Bargaining:
My friend and coworker, Fergus, tried to talk me out of the purchase, or to at least find a second-hand copy. “Those tings are such a rip-off, man!” he said in his thick, nasally, West-Irish accent. He had a very valid point.

So, on Fergus’s recommendation, and in an attempt to save some won, I checked out  what can only generously be referred to as the teachers’ “library.” This consisted of a few shelves of beat-up, dog-eared, and discarded books from former teachers. There were a few diamonds in the rough, but for the most part it was easy to see why these books had been abandoned by departing teachers. I was tempted to save these few gems, but none of them would help on my trip (other than giving me something to read whilst lost). I decided to leave them, on account of already having too many unread books at home.

The next step was to annoy the entire English Village community by sending out an e-mail to everyone, asking if anyone had a travel guide for India. I received two replies: the first from occasional-collaborator, occasional-rival Content Area Leader Kenny, who explained that he did not have one. Thankfully I didn’t receive an e-mail from everyone who did not have an India guide. The second e-mail was from a teacher in another department, explaining that they had a small guide in their office. I paged through this pocket-sized book, and the bits that hadn’t been destroyed by a dog didn’t seem that helpful. I took it anyway.

Denial:
At this stage, I decided that I didn’t really need a Lonely Planet guide for India. “We live in an information age!” I told myself. I could research my trip using resources like wikitravel.com , I could book places to stay though hostelworld.com, and I could read countless blogs.

Furthermore, it has been my experience that roughly 50 percent of the info I’ve read in other Lonely Planets has been apocryphal, outdated, and completely wrong. Do you want to visit that restaurant with the glowing reviews? The food was cold when served, and it gave us the runs for a day and a half. That cute café around the corner from your hostel? It has been closed for 3 years, and that hostel never existed. How about that temple you wanted to visit? Well, it’s actually closed on Mondays, not Sundays.

After a few weeks of going rogue, I lost patience. The Interwebs are an incredible source for information, but it’s too much information. And being right about half the time is a level of accuracy that the Internet would dream about, were it a sentient being.

Depression:
My internet searches were somewhat helpful, but I found it difficult to keep everything properly sorted. I felt like a blind man throwing darts in a crowded bar, who somehow, against all odds, expects to hit the target and not some poor sap.

I began to have a sneaking suspicion that I might need to break down and buy the book. Still, I kept putting it off, as if procrastinating would suddenly make it cheaper. That’s rarely the case.

Acceptance:
The allure of having all the information at my fingertips–and without the need for Internet access–was too great. With a sigh of resignation, I picked up the book and forked over four green 10,000 won notes to the cashier.

In fairness, the copy has been helpful in trip planning and it has given me some good ideas and useful information. I’m sure it will come in handy a few times on the trip, when we’re lost and/or confused in India. And compared to the price for plane tickets, accommodation, and food, the price for a Lonely Planet is really just a drop in the bucket.

The key, I believe, is to not let the guidebook do too much guiding.  Use it as a source of knowledge, but don’t let it become the be-all, end-all authority. Now, I’m ready for the trip. One week to go.

← Preview: India and Other Things on the Horizon
Delhi →