Were I to list my favorite couchsurfers to host, those hailing from Denmark, Sweden, and Norway would be the top 3, in some sort of arbitrary order. All the couchsurfers I have met from this region have been fantastic. My first two, Elof (from Sweden) and Christian (from Denmark), were no exceptions to this rule.

While I had a great time with Justin and Stephen, and Casey and Tory, this was the first time that I felt an actual friendship develop between myself and other couchsurfers.

Like my other guests before them, Elof and Christian were on a cross-country trek through the United States. In this particular case, they were drawn to East Tennessee because of Dolly Parton’s theme park, Dollywood. According to Elof, “When we heard about it, we thought it sounded so kitsch that we just had to go.” OK, so it wasn’t a glowing recommendation for Dollywood or East Tennessee, but it was enough to draw them to our quiet mountain town. However, the true art of traveling lies in the cracks in the plans. Herein, adventure begins.

My roommate Rhett and I got on with the boys right from the get go. They were both med students in Denmark, and both were great conversationalists, with intelligent insights, wide ranges of knowledge, and excellent senses of humor. 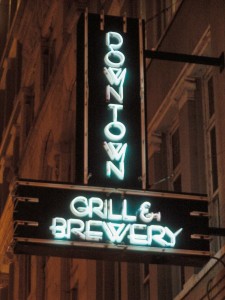 Elof and Christian came in the same night that we were planning on seeing The Dark Knight. We already had tickets, so we offered to buy them a pair before they arrived. In retrospect, this is something I probably wouldn’t do today. Perhaps I was naive, or perhaps I had a good feeling in the short conversation I had had with Elof when confirming their stay. Whatever the reason, it worked. We went to the brand-new theater on Gay Street in downtown Knoxville, which was a conveniently short walk away from the Downtown Grill and Brewery. It was here that we shared some delicious micro-brews and talked for hours about politics, sports, and even religion. For Rhett and myself, it was rare to be able to have an intellectual conversation about religion (or the lack of it) with anyone other than each other.

As great as it was to host them, they clearly enjoyed the experience as well. According to Elof, I am:

“A very good guy to spend time with! He knows a lot of both local history and culture as well as how to have a good time in the local nightlife. It was a ball those days in Knoxville! Wasn’t it for Zach I think we had only spent one night in Knoxville.”

Indeed, instead of spending a singular night with us before going to Dollywood and then on to the rest of the state, they stayed five days! We didn’t have to try too hard to keep them entertained, as they were always up for just about anything.

The most memorable day was when the four of us went to campus for an afternoon of sports. In an embarrassment to Americans everywhere, Rhett and I had our asses thoroughly kicked at basketball. Elof and I then teamed up for a great round of beach volleyball. We won the best-of-three series, in a hard-fought, painful, and, ultimately fun, game. I would be remiss if I did not include “painful” seeing as each and every one of us went home with at least one bloody knee. It turns out that the beach volleyball court (it is a court, right?) at UT is not very deep, and a single fall is enough to scrape the skin.

Despite the great time, on a certain level I wanted them to go sooner. Every extra day they spent in little ol’ Knoxville was one that they wouldn’t be spent in Nashville or Memphis or another town in another state altogether. Ultimately, they decided that is wasn’t where they stayed, but with whom they stayed. At the end of the day, traveling is only as good as the company you keep–a lesson that I find repeated throughout the Sofasphere.

← Repaying the Debt: Hosting Surfers of My Own
Courtney the Supersurfer →