It occurred to me tonight, while listening to some tunes and thinking about what to write in my blog, that I haven’t written much about my job since my arrival in Korea. At my last job, it made sense to not write; writing about my job would have invariably led to a fit of rage against my lying, dipshit employers, and any recently enacted policies that only could have been made with either lowering employee morale in mind or out of sheer incompetence. It didn’t always stop me from writing and publishing my work, but you should have seen what I didn’t  publish. 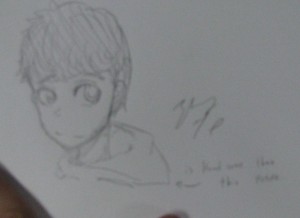 Yours Truly, Anime Style. By the one and only David Park.

In comparison, my new job has been great and highly enjoyable. In fact, I would go out on a limb and say that this is the best job I’ve ever had. So what has prevented me from writing about it? My best guess? Repetition. Most weeks are more or less the same: the kids arrive, we have fun with them for a week, and send them home on Friday. Yawn.

That repetition changed the day after Christmas, when 210 students arrived for hour bi-annual Vacation Intensive Program, or V.I.P. for short. The camp lasts a month whilst the students are on break from school, and allows for more in-depth teaching and far more interaction than we normally can provide. This is actually my second time being here during V.I.P., but last time I was loaned out the Special Programs department so I missed a lot of the fun. I did have my own fun in Special Programs, such as the two-week program with Russian, Korean, and Japanese students.

I certainly wouldn’t want to do V.I.P. sessions all year around, but I’ve enjoyed the experience. We put a lot of effort into these two camps a year, and it’s rewarding to see it pay off and the students enjoying themselves. 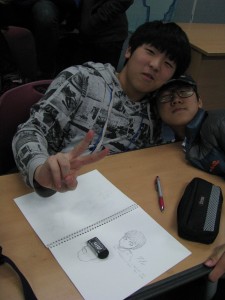 Certainly there are downsides, the workload and total teaching hours are higher than average. However, one thing I have missed about my last job is the ability to get to know the kids, and this intensive program has allowed for that.

So what is different about V.I.P. specifically? Well, ordinarily our language and content area classes are the same week after week. Clearly that wouldn’t work on a four-week program. Instead of cooking muffins for weeks on end, we have to mix it up: cookies the first week, toad in a hole the second, spaghetti the third. Also, the students tend to be at a higher level than our average one-week students, so the language lessons are more advanced.

While the academics are more challenging for the students, we also can have more fun with them. The students were divided into five “Houses” and compete throughout V.I.P for the House Cup (think Harry Potter). This gives students and teachers alike a vested interest in succeeding. 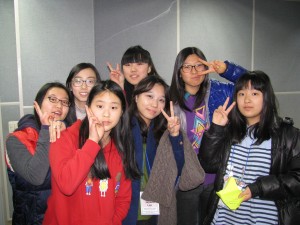 We also have club time a couple of times a week. I was the Movie Club leader, but the students could also be in other clubs such as: Martial Arts, Writing, Music, Soccer, and others.

Things ended on a down note for my house, Santa’s Cool Sleigh Runnings. We were in the points lead for the House Cup going into the last day. The last competition was the House Presentation: we had a dance routine, song, custom video with animations by David (see above!). We had some technical issues, but the kids worked that out on their own and with some quick thinking, they held a microphone up to a cell phone and played the song for their dance routine. It was all for naught. At the end of the day, cute trumped skill as the youngest classes did the “best” in the final competition and overtook us for the House Cup. 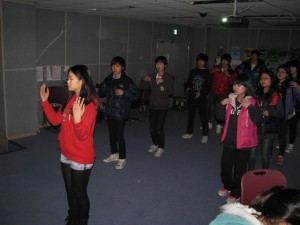 As the program ended, I had mixed feelings (as I know many of the kids did). I will miss many of them, but it was a relief to cross the finish line.  As per tradition, we stood out in the cold for an hour and a half as the kids walked out of the dorms with their parents to say one final good-bye. There were some shout-outs, a few hugs, and yes, even some tears.

This week, we are out of session to celebrate the Lunar New Year, or Seollal. Many of us are away on vacation, but I needed the rest (and money) so it’s a “stay-cation” for me. Next week, we return to business as usual, and I’ll keep an eager eye out for the next V.I.P. in the summer.

← Atheist Me: The Evidence (or lack thereof)
The Lad from Leeds →